Premier Li retired as Xi’s predecessor is escorted off stage

Tom Mitchell in Singapore, Ryan McMorrow in Shanghai and Edward White in Seoul

President Xi Jinping tightened his grip on power on Saturday as the 20th Communist party congress concluded with the premature retirement of Premier Li Keqiang from his top party post and the “astonishing” sight of Xi’s predecessor being escorted from the main stage.

“The party’s achievements in the past hundred years are incomparably glorious,” Xi said in his closing remarks to the congress. “The party is flourishing and we are fully confident and capable of creating new and greater miracles.”

More than 2,200 delegates to the week-long congress had approved a series of revisions to the party’s constitution that effectively proclaim Xi as Communist China’s most important leader since its revolutionary hero, Mao Zedong. The revisions recognise Xi, who will continue his reign as party leader and military commander-in-chief for at least another five years, as “the core of the whole party”. He is also set for a precedent-breaking third term as the country’s president.

“Xi has scored a big victory in the constitutional revision,” said Willy Lam, a party politics expert at the Chinese University of Hong Kong. “Everyone must obey Xi Jinping. On the one hand, this will speed up decision-making, but on the other hand, there will be a complete lack of checks and balances.”

However, the carefully choreographed event was initially disrupted by the abrupt departure of Xi’s predecessor, Hu Jintao, from the stage.

Hu, 79, was escorted off the rostrum by two officials. One of the officials initially tried to lift the former party general secretary and president, who stepped down from his party posts in 2012, out of his seat.

He had been sitting next to Xi and walked gingerly as he left, pausing to exchange words with Xi and Li before patting Li on the shoulder. There was no immediate official explanation for his exit.

Hu had sat through the entirety of Xi’s almost two-hour opening speech to the congress on October 16. 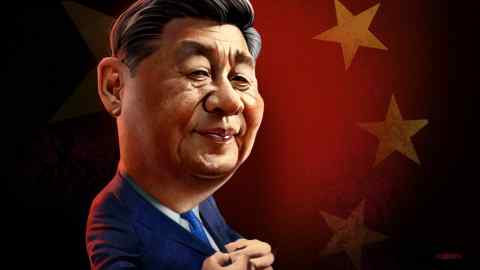 The congress also strengthened Xi’s already ironclad grip on power by signalling the retirement of Li and Wang Yang, previously members of the party’s most powerful body, the Politburo Standing Committee headed by Xi. Neither man was listed as a member of the party’s new 205-member Central Committee, according to a list published by the official Xinhua news agency.

Under current party precedent, Li and Wang, who had been seen as a potential successor to Li as premier, were both young enough to be reappointed to the seven-member Politburo Standing Committee. Xi’s reappointment as state president — and the identity of China’s next premier — will not be confirmed until China’s parliament convenes its annual session in March.

Their departures will allow Xi to appoint more loyalists to the Politburo Standing Committee, the members of which will be revealed on Sunday, along with 13 new appointees to the party’s 25-member Politburo.

The congress declared that Xi’s leadership had “eliminated serious dangers within the party, government and military” — a veiled reference to widespread corruption during Hu’s 10 years in power — and would “ensure the realisation of the great rejuvenation of the Chinese nation”.

According to an unofficial party convention on age, officials who are 67 or younger are eligible to step up to another five-year term on the committee, while those 68 or older must stand down. The party leader is not subject to the age limit.

Hu succeeded Jiang Zemin as party leader in 2002, in what was then celebrated as the party’s first-ever orderly leadership transition since it took power in 1949.

Xi, however, did not designate a successor at the last party congress in 2017 and China’s parliament abolished the two-term limit on the presidency a few months later. That paved the way for Xi, who turned 69 this year, to rule potentially for as long as his health allows.