The threat of antibiotic resistance — in charts

Overuse of antibiotics by humans and in the farming of meat and fish is driving increased microbial resistance and threatening the availability of life-saving treatments. The World Health Organization calls antibiotic resistance one of the top 10 public health threats and the UN predicts up to 10m deaths a year from drug-resistant infections by 2050.

Yet until recently there has been only a limited effort to measure trends in antibiotic use, their effects and to hold countries and companies to account. Governments, non-profits and investors alike are now starting to collect information to identify good and bad practices.

Drug-resistant infections are a bigger problem in lower income countries

The Centre for Disease Dynamics, Economics and Policy (Cddep), a US-Indian think-tank, has developed a Drug Resistance Index to track antibiotic usage and resistance around the world. It provides a measure of the effectiveness of therapy in different countries by analysing usage of drugs and the degree of resistance of key pathogens to them.

Poorer countries such as India frequently perform poorly (with a high score on the index) because of relatively widespread resistance to the small number of antibiotics that are available. Richer nations like the US typically score better because a wider range of antibiotics are used in a more targeted way.

The index is limited by countries’ willingness and ability to report reliable data, and has triggered debate over its methodology in combining different statistics. But it helps to identify patterns such as variations in monitoring of resistance, health system operations, and drug availability and stewardship.

Cddep’s compilation of statistics on antibiotic consumption highlight growing use in humans and animals and the need for tighter rules for accessing the drugs. Vietnam has very high overall levels of use in agricultural production, in the community and in hospitals, where patients often acquire infections.

Turkey had among the highest rates of resistance in OECD countries, partly reflecting widespread use of antibiotics among outpatients. Analyses of Serbia showed high level of usage and inappropriate prescribing in hospitals.

Many drugmakers could do more to combat the problem

The Access to Medicines Foundation tracks the activities of pharmaceutical companies on antimicrobial resistance, providing a tool for investors and policymakers. While highlighting progress, it concludes that “the pace of change in 2020 does not match the scale of the AMR challenge”.

Its antimicrobial resistance benchmark analyses companies’ widely varying investments in the research and development of new antibiotics, efforts to limit aggressive marketing and overprescription of drugs by their sales teams, and programmes to reduce waste and enhance surveillance.

GSK performs well with active research into new antibiotics, a detailed strategy to limit discharge during manufacturing, a programme to ensure access to drugs, to control their use and monitor resistance. Hainan Hailing, which scores poorly, sells 47 anti-bacterial or antifungal drugs but provides little information on its environment-risk management, access or stewardship measures.

Antibiotic use by food producers is widespread

The problem of antibiotic resistance is driven by food-chain practices as well as overuse of the medication in humans. The Farm Animal Investment Risk & Return initiative (Fairr), a network of investors concerned about the environmental, social and governance consequences of intensive livestock production, has produced a “protein index”. It tracks activities by agri-food companies, monitoring their disclosure of antibiotic practices and reduction efforts in rearing cattle, pork, chicken and fish.

Among 60 quoted companies analysed, 70 per cent are classified as high risk, two-thirds disclose no information on antibiotic use and only a quarter state they do not use antibiotics routinely. Companies based in Europe perform better, reflecting tougher regulations in force from 2022 that mean antibiotics will only permitted when a disease is present and with the approval of a veterinarian.

The pipeline of experimental antibiotics in development tracked by the Pew Charitable Trusts remains thin compared with drugs for other medical conditions. Relatively few companies are researching new treatments, some experimental medicines are not tackling the areas of greatest need, there are high costs and failure rates during trials and some are discontinued because of poor commercial prospects.

As Pew reports, the graphic “underscores the longstanding concerns of scientists, doctors, public health officials, and other stakeholders regarding the dangerously low number of antibiotics in development . . . particularly for treating the most urgent bacterial threats.” 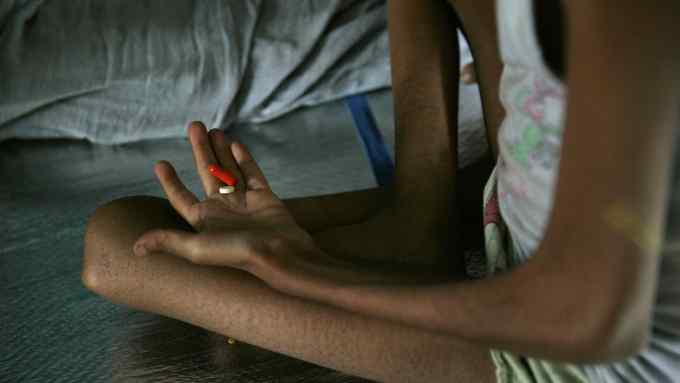