We’ll send you a myFT Daily Digest email rounding up the latest US & Canadian companies news every morning.

It’s been a bad start to the year for tech stocks.

In the first five trading days of 2021, the Nasdaq Composite lost 4.5 per cent over fears of higher interest rates. Or, in layman’s terms, a strong American economy.

On the face of it, however, it’s hardly the apocalypse. The Nasdaq closed Friday at 15,592 — just 7 per cent off its all-time high last November.

Yet open the bonnet of the US’s premier technology index, and it’s clear the internal machinery of the market is faltering. While generals like Microsoft, Google and Amazon are only a few percentage points or so off their all time highs, the lowly officers are getting shot. According to data from Mirabaud Securities, 38 per cent of stocks in the index have been cut in half since their respective peaks.

The dispersion between the halves and half-nots is particularly visible in the performance of ARK Invest’s Innovation ETF run by star stockpicker Cathie Wood. Long heralded for her market outperformance, derived from placing deeply idiosyncratic bets on companies operating at the sharp edge of the technological frontier, ARK’s flagship fund is now in the midst of 47 per cent drawdown since it peaked last February, almost exactly when the FT profiled Ms Wood.

The beginning of the year has been no kinder to the former Fidelity AllianceBernstein* fund manager, with each of the 43 positions in her $18.4bn ETF in the red through to Friday. Via Mirabaud again:

That’s despite the broad exposure of the portfolio to sectors such a life sciences (Beam Theraputics), electric vehicles (Tesla), working from home tools (Zoom) and gambling (Robinhood).

Take a look at the portfolio as a whole, and you might spot a problem: the valuations.

Much has been made of the ridiculous valuations in technology stocks over the past few years. A decade ago a price-to-earnings ratio of 40 would be considered “expensive”, even for company growing at a clip. A year ago many in the market were happy paying up at 40 times revenues for the same privilege. Some — like buyers of cloud software company Snowflake --- even ventured into paying more than 100 times sales.

ARK, as a fund specialising in speculative technology stocks, was no different. But what’s striking is that, despite a near 50 per cent drawdown, its portfolio is still expensive by anyone’s standards.

This morning, FT Alphaville pulled the data from ARK’s website and calculated the weighed average enterprise value-to-forward sales multiple of its portfolio. Here’s how it looks in chart form (all date provided by S&P Global and portfolio weights as of 10 January):

Yep, a weighted average multiple of 31 times forward sales. Of course, this is dragged up by outliers in the portfolio such as autonomous trucking play TuSimple (trading at 247 times). Still it’s eye-wateringly pricey.

Just over a month ago, Cathie Wood told CNBC that following the drop in her portfolio, she expected an annual compound rate of return of 40 per cent over the next five years. We wonder if the holders of her ETF who, by some estimates, are now on average underwater, will have the same conviction.

*This article was updated to reflect the fact Ms Wood used to work at AllianceBernstein, not Fidelity. 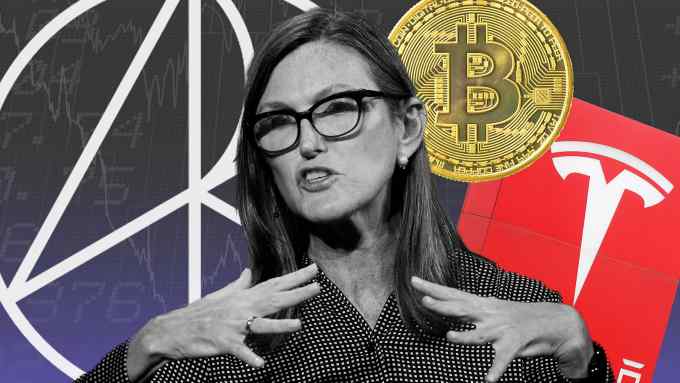