The Cause: meet your new bag for life

Among Equals is bringing traditional bilum weaving to a global stage

In a small motor boat, Lina Singhu, a Papuan weaver from the country’s Eastern Highlands, travels up and down the Sepik River. Every few metres she’s greeted by a group of women, who join her at the banks to sell bilum, the handwoven bags made in Papua New Guinea for more than 2,000 years.

Lina’s bags make up much of the stock sold by Among Equals, a non-profit founded in 2015 by textiles designer Caroline Sherman. It was at an exhibition in Sydney that Sherman was introduced to a group of weavers who had spent their whole lives making bilum. Today she sources them from around 2,000 makers. Each bilum (from A$150) has a story: one might symbolise the “challenges, struggle and hardship” of a mountain-based community; another could hide a love affair. “They all have their own look and feel,” says Sherman.

Traditionally a craft practised by women, the art of bilum weaving is passed down from mother to daughter. (In local dialect, the word literally translates as “womb.”) “It’s almost like abstract art,” says Sherman, referring to the prismatic patterns created from colourful scraps of recycled knitwear. Other designs are made from natural materials: Among Equals’s Telefomin range uses fibre sourced from vegetation in one of Papua New Guinea’s most remote districts.

It’s a safe space for women to receive craft training

Sherman chooses her bilums – around 40 a week – from images sent via WhatsApp by weavers, who choose their own hours, set their own prices and receive direct payment for their products. Florence Jaukae Kamel, an ambassador in the Eastern Highlands Province, estimates that each sale benefits up to 15 people; the money is used to fund everything from clothes and blankets to children’s school fees.

In 2017, Sherman set up the Blue Haus: “It’s a safe space for women to receive [craft] training,” she explains of the Goroka-based complex. “They can sleep there, eat there and there’s electricity and running water.” In the future, Among Equals is working to provide the community with a car to help meet new demand. (Aside from funding a small production team in Sydney, all profits support the weavers and their communities.)

Sherman sees a link between the bags’ popularity – Among Equals is now stocked on ModeSens and Shopbop, and has a growing market in Europe and the US – and a renewed “sense of hope and vibrancy”. It’s a mood that has spread to PNG’s weaving communities. Whereas previous attitudes suggested that bilum might die out, now, says Sherman, “it’s becoming the cool thing to do”. Consider a bilum, then, as your new bag for life: functional, beautiful and the result of a millennium’s worth of tradition. 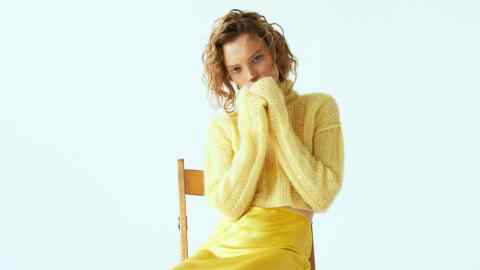