Tommy Stubbington in London and Martin Arnold in Frankfurt

Eurozone government bonds are showing signs that investors think the European Central Bank may begin to wind down its emergency bond-buying programme as soon as this month.

ECB policymakers meet next week in the shadow of the highest inflation rate for more than a decade, after data this week showed a 3 per cent annual rise in eurozone consumer prices in August, well above the bank’s target of 2 per cent. The inflationary burst has pushed a number of ECB rate-setters to suggest the central bank’s debt purchases could be scaled back earlier than previously thought.

“We are seeing investors pricing in some risk of a taper at the September meeting,” said Mohammed Kazmi, a portfolio manager at Union Bancaire Privée. “Up until now the market had been pretty comfortable that they would keep going at the current pace to the end of the year.”

Germany’s 10-year bond yield, which serves as a benchmark for debt across the euro area, rose to minus 0.36 per cent on Wednesday morning, the highest in more than a month and up from minus 0.5 per cent two weeks ago, reflecting a drop in prices. The move has come alongside a rise in US bond yields, although the eurozone sell-off has been swifter in recent days.

The ECB’s €1.85tn pandemic emergency purchase programme (PEPP) has bolstered the region’s bond markets since the early stages of the Covid-19 crisis, helping to pin yields close to all-time lows even as governments issued record quantities of debt to fund their response to the pandemic.

Unlike in the US, “tapering” in the eurozone is not expected to set the ECB on a path to ceasing asset purchases altogether. Instead, analysts think ECB president Christine Lagarde will outline plans in the coming months to beef up its longer-running quantitative easing programmes to take over from PEPP.

“I think it will be a dovish tapering by the ECB next week, with a heavy emphasis that committing to a slower pace on PEPP does not entail a tightening, while signalling it retains flexibility to increase the pace if financing conditions tighten, and that policy will remain highly accommodative after PEPP ends next year,” said Katharina Utermöhl, an economist at Allianz.

The most likely outcome is that the ECB will point to the fall in bond yields since they peaked in May, saying this decline in national borrowing costs enables it to cut PEPP purchases from the €80bn a month pace it has maintained since March. But the central bank looks set to keep monthly purchases above the €40bn a month pace at the start of the year, when bond yields were even lower.

Some ECB policymakers have been signalling such a move for the past week. Chief economist Philip Lane has spoken of a likely “local adjustment” to asset purchases, saying that lower sovereign debt issuance from next year could reduce the amount the ECB needs to buy. On Tuesday, ECB vice-president Luis de Guindos said the “extraordinary measures will have to be gradually withdrawn” as the economic outlook brightens.

This means the ECB is unlikely to continue to buy the entire supply of new government debt in the euro area in 2022, as it has since the start of the pandemic, according to Rohan Khanna, rates strategist at UBS. “We think it likely that the tide of [quantitative easing] support for eurozone government bonds is ebbing,” he said. 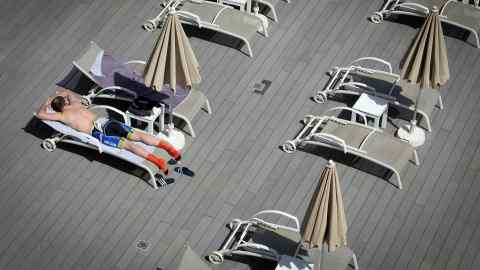 Still, Lagarde and her colleagues remain sensitive to any sign that the rise in yields is accelerating, or that it is pushing up borrowing costs faster for the bloc’s weaker member states such as Italy or Greece. In May, a euro area bond sell-off set nerves jangling at the ECB’s Frankfurt headquarters, helping to forestall any reduction in the pace of bond buying.

This time, however, there is little sign of mounting pressure on more indebted nations. The closely watched spread between 10-year Italian and German borrowing costs has widened only slightly to 1.08 percentage points, from 1.01 percentage points in early August.

“I think there’s room for a further sell-off into next week’s meeting,” said UBP’s Kazmi. “We are seeing a steady grind higher in yields rather than a more volatile move that would spill over into spreads. That’s what would really cause concern at the ECB.”

The decision represents an early test for the ECB’s new strategy, which it unveiled in July. The central bank raised its inflation target slightly to 2 per cent and said it was prepared to tolerate any moderate and transitory overshoot in price growth, while promising to maintain “forceful and persistent” policy to hit its objective.

Although the ECB is likely to raise its economic forecasts next week, it is expected to maintain its prediction for inflation to fall back below its 2 per cent inflation target in 2022 and 2023, justifying a continued high level of monetary stimulus.