Saul Nash is making all the right moves

Meet the designer, dancer and choreographer picking up a raft of prizes for his easy brand of sportswear

The fashion industry has a knack for attracting showmen. Those who relish the performance of it all – the theatrics of the catwalk, the schmoozy parties, the dressing up – as much as, or maybe more than, creating the actual clothes. In the case of menswear designer Saul Nash, however, the performance of fashion takes on a more profound meaning.

For his AW20 show, part of new-gen talent incubator Fashion East, Nash cast a group of dancers in place of models: they twisted, twirled and slid around in slick, transformable sportswear and made everyone sit up in their seats to watch. For his follow-up collection Flipside, for SS21, Nash filmed himself and a handful of dancers running and swaying along a cliff face. A year later, at London Fashion Week, he orchestrated a scene in which models changed out of their clothes while waiting for the bus.

The dynamism of his presentations makes sense given that, as well as being a fashion designer, Nash is a dancer and choreographer. The clothes he creates highlight both the versatility of his luxury sportswear and allow him to speak in the visual language with which he’s most familiar.

Since launching his brand in 2018, the 29-year-old has risen to the top of London’s next generation of designers. He was a semi-finalist for the LVMH Prize in 2021, and this year won the International Woolmark Prize and the Queen Elizabeth II Award for British Design in the same week.

Nash grew up in north London, in a household filled with Caribbean music, where there were always people moving around him. “It was soca, dancehall – whatever my mum was playing,” says Nash of the sounds that first inspired him. “But then she also played a lot of Rod Stewart, and at one point she really loved Enrique Iglesias, so it was a real mix.”

During high school, Nash began working professionally with Avant Garde Dance, performing at Sadler’s Wells and The Place before going on to do a BA in performance design and practice at Central Saint Martins. “When I wasn’t at school or the company rehearsals, I was going around doing hip-hop battles in London, but also in Paris, Germany, Holland, Morocco,” Nash continues. “What was amazing with hip-hop [battles] is that they taught me to be confident, because you have to stand face to face with your opponent and show them that your movement can beat them. Even if you were having an off day in the battle scene, you had to enter with confidence.”

Discovering the work of Zowie Broach, who co-founded British fashion brand Boudicca in 1997, spurred Nash to do a master’s in fashion design at the Royal College of Art. “I was inspired by her show at the Royal Opera House where she used a ballerina to almost paint the ground,” says Nash. “That was an early insight for me into how performance and fashion could come together.” Nash is also influenced by the late designer Issey Miyake, who “carved the way for performance. There are so many people who have broken down doors for me to exist”.

Nash could very well be a young Miyake. Both initially set out to be dancers, staged performances in lieu of traditional runway shows and made movement central to their designs. “I almost saw the garments as dance,” says Nash. “I saw the cutting and designing as choreographing the way that they would move.”

In the studio, currently at Somerset House, Nash’s operation is small; he still designs and cuts all his own patterns. “He’s using his body as the muse for his designs,” says Bianca Saunders, a fellow fashion designer and friend to Nash. “And with his pattern cutting, everything is shaped around the body; it doesn’t come from a block. So everything is very unique.”

Each season, Nash tries to find more innovative materials so he can eventually phase out the use of the fossil fuel-derived fabrics that are so common in sportswear. He uses organic cotton, recycled polyester and has started experimenting with how wool can work for activewear, through the Woolmark prize as well as a collaboration with traceable knitwear brand Sheep Inc. “There is so much about wool that I didn’t realise was incredible for sports, such as its moisture-wicking properties. And the yarn I’ve found had a high tensity, so it was really stretchy and meant that I could then get rid of elastane in the tops I was using.”

The collaboration, launching this month, includes polos and shorts that are knitted seamlessly so they are “smoother and more comfortable to wear, and uniquely suited for garments that are meant to be worn in movement”, says Sheep Inc co-founder Edzard van der Wyck. “It’s also one of the most sustainable manufacturing methods due to the zero-waste production process.”

While Nash’s brand started out with the sole purpose of exploring movement and dance, his most recent collections have examined other avenues. For Twist, his collection for AW21, Nash made a film in which two men are shoving each other – a precursor to a brawl – before embracing in a tender kiss. Directed by his partner, Fx Goby, it was a comment on his own experience of coming out as gay.

“There’s always that line with sexuality, where you assume people are one way, but they might actually surprise you,” says Nash. “At the time I grew up, there were a lot of stereotypes around myself and the kind of people I grew up around. I wanted to show that there are lots of layers to men – it’s not always the tough guy that you’re representing,” says Nash. “I think it’s important to show a spectrum of men and to show that they all have different sensitivities, that they’re not all the same.” 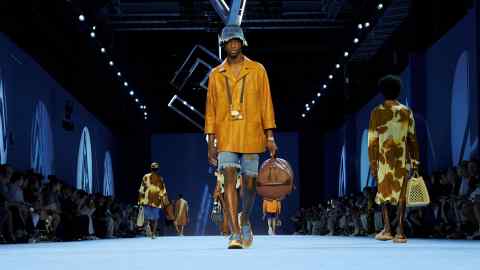 For AW22, he explored the beliefs and rituals of his Guyanese and Caribbean heritage. “In the house, there would always be talk about superstition, like don’t comb your hair and throw it in the bin because the birds will peck at it – you’ve got to flush it down the toilet,” says Nash. An abstract green and blue pattern on a sweatshirt and pants represents the Guyanese flag, and the figure of a mermaid, printed on technical tracksuits, evokes folklore told in Caribbean, African and Latin-American cultures. His runway show was also accompanied by a short film set in Gee Barber in London. “That’s a ritual for a lot of the men that I grew up around,” says Nash of the barbershop. “For me, that’s a transformative place. You go and then you come out as a different person.”

Despite his success in fashion, with growing markets in Asia and the UK, Nash still has ambitions as a choreographer. And he still dances every day. Currently, he belongs to the British chapter of the House of Revlon, the international ballroom house, where he walks in the “old way” category. “We meet a lot because it feels like a family,” says Nash. “They have balls a few times a year, but sometimes we just meet and don’t even dance. We just hang out.” It’s hard to imagine even a moment when Nash might sit still.