Battle of the brands: who owns rock-star chic now that Slimane’s back in town?

There was a spectre at the Saint Laurent show, and it resembled the figure of Hedi Slimane.

For those needing a recap, Slimane is the former Saint Laurent designer whose four-year tenure transformed the house’s identity and doubled its revenues to €1bn, before he departed the Kering-owned company in March 2016. Anthony Vaccarello has been steering the label’s direction ever since.

To a great degree, Vaccarello’s Saint Laurent has followed the same aesthetic principles as Slimane’s did; teeny slim-fit tailoring, rock-star leathers, denim, sparkly cocktail dresses and stacked platform soles have been the mainstays of the womenswear. The menswear has remained indie-band insouciant — Jimi Hendrix blazers, gauzy shirts, tuxedos — designed for the type who wants to look like they just fell out of a club.

For SS19 he offered more of the same: models splashed along a water-covered runway in looks recalling the LA music scene; eveningwear was leopard-spotted and floaty; there were micro denim shorts, velvet blazers, high-waisted hot pants and tonnes of black leathers. The girls wore Saint Laurent flat-topped hats of the old school, while the brand’s famous tuxedo was whip-slim, high-waisted and black. The styling was a nod to one of Yves Saint Laurent’s Seventies muses, Paloma Picasso. The men wore skinny jeans, gold boots and cravats.

Under Vaccarello, the brand codes have been left largely undisrupted. He has added his own take, for sure, but his direction has been super-mindful of the core customer — and the business has continued to grow in double digits. Last week it was reported Vaccarello had renewed a three-year contract. All the signs are that he’ll stick with Saint Laurent.

But what does that mean when the real architect of Saint Laurent’s success is back in town? On Friday night, and following a two-year fashion sabbatical and six-month build-up, Slimane unveils his first collection for the LVMH-owned Celine.

Quite what that will look like remains a mystery. But hints of his Celine are currently fly-posted all over cities around the world, part of an advertising campaign in which clues to the collection can finally be gleaned. Shot in black and white, and starring a cast of wan, androgynous models, Slimane’s Celine looks a lot like his Saint Laurent.

Is there space in the market for two brands marketing LA hipster cool? The folk at Saint Laurent seem to think so. Staged on a catwalk fringed with palm trees, before a reflected vision of the Eiffel Tower, it seemed to be tuning up for the contest. It’s not going to give up its groupies that easily. Let the battle of the brands commence. 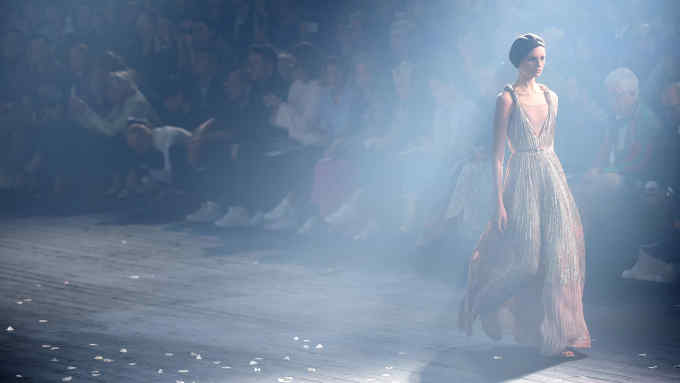