Business book of the year 2021 — the shortlist

Climate change, opioid addiction and cyber crime are among the themes analysed in this year’s £30,000 award

The challenges of climate change, racial discrimination and cyber crime feature on the shortlist for this year’s Financial Times and McKinsey Business Book of the Year Award.

The judges praised the high quality of the longlist of 15 titles, from which they selected six finalists:

The World for Sale, by Javier Blas and Jack Farchy, former FT journalists, tells the story of how a group of international commodity trading houses rode the commodity boom.

Empire of Pain, by Patrick Radden Keefe, explores the links between the Sackler family and the global epidemic of opioid addiction through the rise and fall of Purdue Pharma, a company owned by two of the Sackler brothers and their families.

The Conversation, by Robert Livingston, examines how to turn difficult discussions about race, at work and in society in general, into a meaningful promotion of change and racial justice.

The New Climate War, by climatologist Michael E Mann, is a polemic against climate “inactivists” and lays out systemic measures to combat the global problem of climate change.

This Is How They Tell Me the World Ends, by Nicole Perlroth, analyses the threat posed by the arms race between cyber criminals, spies and hackers fighting to infiltrate essential computer systems.

The Aristocracy of Talent, by Adrian Wooldridge, is a wide-ranging analysis of the backlash against meritocracy, which makes the controversial case for a revival of competition according to talent.

The finalists were announced at an online event on September 23 by Virginia Simmons, McKinsey’s managing partner, UK, Ireland and Israel.

Roula Khalaf, chair of judges and editor of the FT, praised an “excellent shortlist” that “tackles many of the pressing issues facing business today”.

The Business Book of the Year Award was first presented in 2005. The £30,000 prize goes to the book that provides “the most compelling and enjoyable” insight into modern business issues. Runners-up will each receive £10,000. Last year’s winner was Sarah Frier for No Filter, her analysis of the growth of social media company Instagram and its takeover by Facebook.

For further insights into this year’s award, please visit www.ft.com/bookaward. 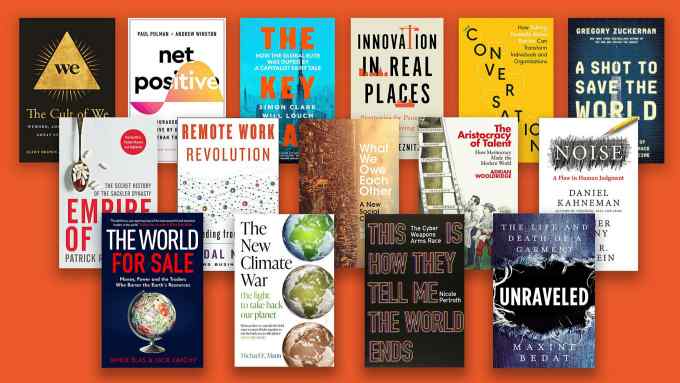