Andres Schipani in Lviv and Henry Foy in Brussels

The Russian assault on the besieged Ukrainian port of Mariupol has continued despite Moscow’s promises of a ceasefire to allow for the evacuation of civilians, Kyiv said on Thursday.

Russia’s ministry of defence-controlled TV channel Zvezda reported on Wednesday evening that its troops would enforce a ceasefire on Thursday to allow people to leave the stricken city through humanitarian corridors.

But Iryna Vereshchuk, Ukraine’s deputy prime minister, said there had been “no ceasefire” in Mariupol, and that Russian forces had not fully opened a route for evacuations to Ukraine-held territory. Earlier ceasefires to allow civilians to escape the city on Ukraine’s south-east coast have collapsed.

“The enemy continues to destroy, with air strikes, the remnants of infrastructure left in Mariupol, trying to destroy all living things,” Vereshchuk said on Thursday.

Mariupol, which has been encircled by Russian forces since March 1, has suffered some of the worst brutality of Russian president Vladimir Putin’s invasion of Ukraine.

The city’s inhabitants have spent weeks without food, water or heat under constant artillery shelling and missile attacks, leading to the deaths of about 5,000 people, according to local officials.

The attempt to relieve Mariupol comes as western officials continue to dispute Russia’s statements this week that it would “drastically” reduce military operations around Kyiv and other cities, and question Moscow’s commitment to peace talks with Ukraine.

Jens Stoltenberg, Nato secretary-general, said Moscow was “maintaining pressure” on the Ukrainian capital and that Putin had shown “little willingness” to find a diplomatic solution to end the fighting.

“Russia has repeatedly lied about its intentions. So we can only judge Russia by its actions not its words,” Stoltenberg said on Thursday. “According to our intelligence, Russian units are not withdrawing but repositioning.”

Vereshchuk said Russia had only opened a humanitarian corridor to Berdyansk, a Russian-controlled city 80km from Mariupol, suggesting this would prevent transport from reaching the besieged city and taking civilians out. She added that 100,000 people, including the elderly, children and disabled, required immediate evacuation.

“Russia made a commitment and guaranteed that it would continue to take people out today,” Vereshchuk said. “We will see in the evening what the results of such commitments and guarantees will be.”

Earlier on Thursday she said 45 buses had been set to evacuate people but that the evacuation “depends exclusively and completely on Russia, because there are no Ukrainian troops there and these are the commitments that Russia has made to the world”.

Later in the day, Vereshchuk said the “occupiers” had not allowed the buses to go through Berdyansk, thwarting efforts to get them to Mariupol.

War in Ukraine: free to read
‘Hell on earth’: survivors recount the assault on Mariupol | Free to read 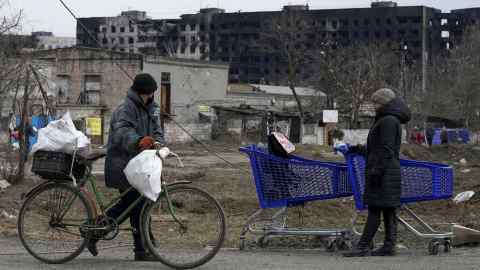 The International Committee of the Red Cross said it aimed to begin evacuating people on Friday, as well as taking aid to the city. But it added that “all parties must agree to the exact terms”.

“This operation is critical. Tens of thousands of lives depend on it,” the ICRC added.

After peace talks with Ukrainian officials in Turkey this week, Russia said its forces would “dramatically” scale back military activities around Kyiv in a move to “increase mutual trust”.

But western and Ukrainian officials said attacks on the outskirts of the capital and other cities had continued despite the Russian statement.

“We have seen little willingness from the Russian side to find a political solution. What we see is a continued military invasion,” Stoltenberg told reporters. “It is good that talks are happening. But so far we have seen no real change in the Russian main objective.”