Classical music to calm the mind

Pianist and composer Chad Lawson is leading a performance at the Southbank Centre’s Queen Elizabeth Hall. He begins the evening by leading the audience through a simple breathing exercise. It’s a first for Lawson, whose career has spanned 25 years, with TV composition credits including Lore and The Vampire Diaries, but he has only lately found his groove in merging neoclassical piano melodies with meditation. “Some basic techniques in calming the mind,” he explains, “activities to help reduce the chaos and listen to music for the sheer enjoyment of it, rather than it being an after-restaurant entertainment activity.” With the room centered, he performs his interpretations of Bach and Chopin, looping the melodies to create smooth, EDM-inflected refrains.

Lawson’s mindful music is now a global sensation. His compositions regularly top the classical charts: Stay, a warm, rippling piano piece, held its place in the Top 25 for more than 55 weeks; while his mindfulness podcast, Calm It Down, has 60,000 weekly listeners.

The pandemic amplified the streaming figures of classical musicians as a younger listenership turned to the genre as “mood music”. Pianist Khatia Buniatishvili’s numbers went up 35 per cent during lockdown, while 23-year-old cellist Sheku Kanneh-Mason saw his grow by 64 per cent week-on-week. Max Richter’s eight-and-a-half-hour lullaby Sleep was broadcast to BBC Radio 3 listeners over the course of a night in April 2020; the album is (at the time of press) on its 356th week atop the charts. Lawson’s podcast encouraged people to relax during the enforced pause. Most people “don’t know how to listen to music”, says Lawson. “We simply hit play, and then never take the time to say, ‘I’m going to simply sit and listen rather than find an activity to do while doing so.’ So if we bring in the element of an additional step – how to relax – it’s all the more to the listener’s benefit.”

HTSI
Why Skepta’s taking over Sotheby’s 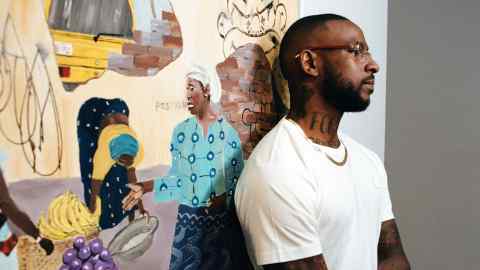 His latest release, breathe, a cadenced, meditative album of piano, cello and violin, puts his work studying the science behind calming music and its neurological benefits into practice, encouraging “box breathing” – exhaling to a count of four, holding for a four-count and inhaling at the same pace. “It’s breathing in the things that can nourish our minds, our emotions, and then letting go of the things that can’t.”