Help! My child’s pension has hit the Lifetime Allowance roadblock

Our tax system is hard to navigate, but there are ways through
Michael Martin

We’ll send you a myFT Daily Digest email rounding up the latest Tax news every morning.

I’m not a petrolhead by any stretch of the imagination. But there are many things that the current UK tax system has in common with Britain’s road network. Since we’re an island, every road ultimately leads to a dead end — a tax cul de sac, if you will.

We can drive down bendy roads, tricky one-lane roads, and just when you feel you are finally on the home straight, be hit by motorway roadworks (in the form of constant tax legislation) that slow us to a crawl in the blazing sun.

The pensions world might be seen as the ultimate off-road terrain. The secret to effective tax planning is to choose your route carefully, understand the risks and focus on the final destination. Also, you will need to check your sat nav (your financial plan) regularly. Does your intended route still suit your destination? Tax bills are unpleasant even when you expect them, but unexpected one are infinitely more so.

A major tax cul de sac that can lure in wealthy people is children’s stakeholder pensions. Who could possibly think they were a bad idea?

After your child or grandchild is born, once the cards and gifts stop arriving, you will find yourself so sleep deprived that you won’t remember the last time you needed an alarm clock. Grandparents, meanwhile, will be waking up to years of free babysitting. In the middle of all this, minds turn to planning for the child’s financial future.

Many advisers recommend a children’s stakeholder pension. It seems like a simple and sensible option to plan for your children’s future. You can put up to £2,880 per year into a stakeholder scheme, receive £720 tax relief and voilà, your child has £3,600 in a pension. What a no brainer.

Unfortunately, even when dealing with an area which is so “simple”, there are various tax consequences to consider.

First, to avoid a future inheritance tax car crash, ensure that the pension payments are gifts made out of excess income. This would be a more likely pitfall for grandparents. If you have two children, married couples need to gift to one child each, not both coming out of a single bank account. This is because you only have one £3,000 personal gift exemption each (I have often wondered if stakeholder pensions were designed with this in mind). This could also be a problem if a couple has three or more grandchildren, as it would take them over the £6,000 allowed limit.

Jason Butler
How to avoid running out of money 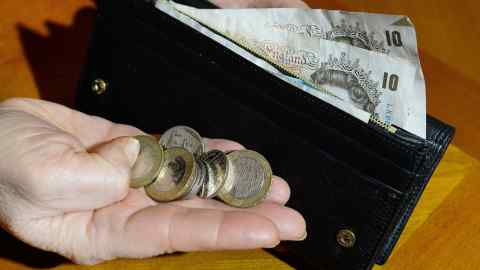 Second, let’s take me as an example. I am 43, my daughters are 9 and 7, and by the time they reach their earliest possible retirement age at 57, I will be in my nineties (and, if I’m still going strong, will still be boring people about pensions).

The lifetime allowance, which governs what an individual can save tax efficiently into a pension over the course of their lifetime, is currently £1.03m, having been pruned back by former chancellor George Osborne.

Let’s assume that the LTA keeps growing at 3 per cent per annum (the current plan). In 13 years, the LTA could be £1.5m (the same level it was in 2006-07 before the recent cut backs). By the time my daughters retire, it could be £2m. For now, I’ll leave aside the obvious caveat of political interference.

So I decide to pay into a children’s stakeholder pension, and make gifts out of regular income. I’ll assume that £3,600 goes into a child’s pension every year from birth to aged 25, and that my investments grow at 6 per cent per annum. This alone would produce a fund of just over £2m by the time the child turns 65. Einstein was right — compounding really is the eighth wonder of the world.

Of course, a £2m pension pot figure would be likely to bust the future lifetime allowance (and if this does reach £2m by the time my daughter’s retire, I think that would be very generous). This pot would have 25 per cent tax-free cash (now called the pension commencement lump sum) with the rest taxed as income.

Let’s assume my children enter gainful employment. One of the most basic workplace pensions, Nest (the National Employment Savings Trust) assumes that 8 per cent of salary will be paid into a workplace pension, with 4 per cent of contributions coming from the employee, 3 per cent from the employer, and a further 1 per cent in tax relief. This is a double-your-money scheme — my children pay 4 per cent and they get 8 per cent. But wait — I’ve used their lifetime allowance. So they could face a lifetime allowance tax charge of 55 per cent. This means my good intentions as a parent have made free money a bad idea — ridiculous!

I have two. I could invest the money in a stock market portfolio in the child’s name, avoiding income-producing funds, since any income over £100 would be taxed as the parent’s income, and use the child’s capital gains tax allowance instead. This is currently worth up to £2,340 per year.

When they are old enough, I will assume the education I give them is enough to make them higher-rate taxpayers. They can pay into a pension, get a matching contribution from their employer, and if they still hit the LTA, the 55 per cent tax charge is a small price to pay. In summary, this route would enable the child to utilise their capital gains tax allowance and assumed future 40 per cent income tax relief, plus benefit from employer pensions contributions and tax-efficient growth. As a parent, I will have benefited from making gifts out of excess income. For my circumstances, this seems a more compelling option.

Planning for 4-5 years in the future is hard enough, but thinking about what could happen in 40-50 years is incredibly difficult. You have to make certain assumptions to work out your strategy

While I don’t like to tempt fate, another route could be taking out a guaranteed whole- of-life policy on me, with any benefit to be paid tax free to my children upon my death. This has no implications on the lifetime allowance at all, and is still covered by gifts out of excess income. I would take it out on my life, not my wife’s. Since life assurance premiums were equalised for being sexist it will be cheaper for me to do so because, statistically speaking, I am more likely to die sooner.

Finally, some words of caution. Pensions have kept me in a job for 25 years. There have been constant changes, amendments, improvements and enhancements. The trouble is, each government wants to make its mark on pensions, and so needs the implications to be seen in a parliamentary term, but the twists and turns last generations.

This article is intended as a general guide, but could form a starting point for discussing your route with your own adviser.

Planning for 4-5 years in the future is hard enough, but thinking about what could happen in 40-50 years is incredibly difficult. You have to make certain assumptions to work out your strategy, then add in the certainties as time and the inevitability of new legislation marches on.

In other words, have an exit plan, review it regularly, and watch for those tax cul de sacs.

Michael Martin is a relationship manager at Seven Investment Management. The views expressed are personal.

Get alerts on Tax when a new story is published