Where do Washington’s politicians drink?

The capital’s most powerful waterholes

The White House has a long and colourful history of mixing politics with booze. Franklin D Roosevelt attempted to smooth US-Soviet relations by stirring a Martini for Stalin. George Washington curried favour with voters on polling day by handing out free punch and rum. John F Kennedy chose a Daiquiri to toast his victory over Nixon. In recent times it has been a more temperate place – both Trump and Biden are teetotal. Some commentators have blamed the demise of tipsy, cross-aisle socialising for the emergence of a more bitter partisan politics. The return of the White House Correspondents’ Dinner (an event boycotted by Trump) was hailed as a return to a more convivial kind of politics. So where do the movers and shakers of DC go for a drink?

Off The Record, beneath the grand old Hay-Adams Hotel, has long been a favourite of DC’s elite. Caricatures of political personalities populate its scarlet walls and beer mats: Kamala Harris, Anthony Fauci and Boris Johnson were flavour of the month when I visited recently. The circular Round Robin bar at the Willard InterContinental has watered everyone from Mark Twain to Abraham Lincoln. Today the clientele, I suspect, is busier planning its sightseeing than political plotting – but head bartender Jim Hewes (who has served presidents including Reagan, both Bushes and Gerald Ford) still rolls out a presidential cocktail menu for inaugurations.

Some commentators have blamed the demise of tipsy, cross-aisle socialising for the emergence of bitter partisan politics

“Cafe Milano in Georgetown used to be the place where everyone went during the Trump administration,” says the FT’s US politics correspondent Courtney Weaver. “The French brasserie Le Diplomate was big during the Obama years.” Pre-pandemic the downtown steakhouse BLT “was always packed”, another DC insider tells me. “[New York Times chief Washington correspondent] Carl Hulse lived there, and I would see Kellyanne Conway and [CNN’s] Wolf Blitzer there a lot.”

These spots may be good for political rubbernecking, but you won’t find much to excite on the drinks list. For agenda-setting cocktails head to Silver Lyan; for a world-class whisky selection to Jack Rose Dining Saloon. One of DC’s newest additions is The Fountain Inn in Georgetown. A stylish reimagining of an 18th-century tavern frequented by Washington and Jefferson, it serves contemporary takes on historical drinks including the Fish House Punch, made with peach brandy, cognac and rum.

Rum with George Washington or Diet Coke with Donald Trump? I know which one gets my vote.

HTSI
Inside Seed Library, a Bond villain’s lair of a bar 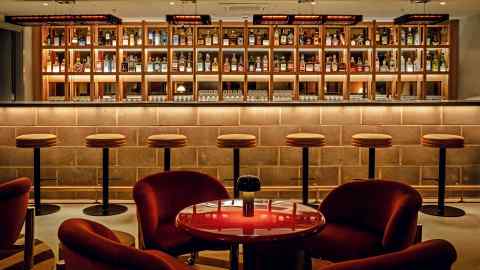