Surfwear for dudes (and dudettes) with a social conscience

It seems natural that surf brands would aim to have a positive impact on the world; the sport is inextricably linked with nature and, for years, surf culture has encouraged more open-minded views on sociopolitical issues. Big brands within surfing haven’t always followed suit, but a wave of purpose-led independent labels are now seeking to redefine industry norms through local production, ocean projects and broader social causes. When Mami Wata launched in 2017, the South African surf brand’s intention wasn’t only to showcase boards and surf gear made from local cotton but to shift the conversation around global surf culture.

For decades, surf brands have spun a western-centric narrative. “It didn’t make sense that I never saw anybody who looked like me in this story of ‘what surf culture was’,” says Selema Masekela, its co-founder (and the son of South African music icon Hugh Masekela). “What was being marketed to sell surf culture was focused on southern California and Australia.”

Mami Wata’s products, designed by co-founder Peet Pienaar, have a pan-African aesthetic and are anything but what you’d expect to find in a typical surf store. “[It’s amazing] to look at the rich influences of African designers and brands,” says Masekela.

To help consumers better understand the history of surfing around the continent, the brand published Afrosurf, a coffee-table book that shares powerful untold surf stories from across Africa. “When people discover that African peoples have a deep and historical relationship with water as a culture, it blows them away,” says Masekela. In recent years, Mami Wata has also launched collaborations with creatives including photographer Pieter Hugo, and earlier this year they infiltrated one of California’s shiniest surf strips when they opened their first pop-up on Venice Beach’s Abbot Kinney Boulevard.

Bantu Wax, founded by Yodit Eklund, is also helping to insert Africa into the global surf culture conversation; Eklund grew up on the continent and studied in the US. While the brand’s team is based in Dakar, the products are made across Africa; hats are woven by hand in Burkina Faso and bandanas are silk screened by refugees in Kenya. “Our mission is to build a leading, authentic and premium brand that uses surfing as a cultural bridge between Africa and the rest of the world,” says Eklund. Bantu Wax has a constant rotation of collaborations with designers, artisans and factories to produce the collection, but one thing remains the same: the products always have and always will be made in Africa.

Loot was founded by Andrés Saavedra and Tara Medina in Zihuatanejo, along Mexico’s Pacific coast, in 2013. The lifestyle brand has many extensions including a radio station, but it has always been rooted in surfing – the couple did, after all, meet on the waves. The brand has focused on social and environmental causes: they are involved in Mexi Log Fest, an annual community initiative and surf event, and have teamed up with Surfeando Sonrisas, a non-profit where boards are donated and sold and proceeds go to children with disabilities in the communities around Guerrero. In a conservation-focused initiative, Loot is also supporting the restoration of a reef located at Musa, the company’s new hotel concept along the coast.

“I have the genuine belief that doing good is good business; and we want to be able to help as many people as possible by doing the things we love,” says Saavedra, who also supports organisations such as Therasurf, which gives children with special needs the opportunity to surf as a means of therapy.

HTSI
Surf’s up at the auction house 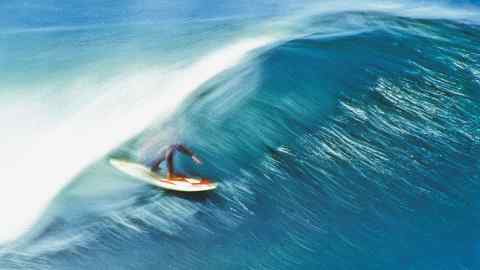 Providing products that are more responsible and lighter on the planet has also become a rising trend. Kassia Meador, a California-born award-winning surfer, launched Kassia+Surf in 2015. One of the brand’s main initiatives is a recycling programme, where it has worked with California-based Suga, which makes yoga mats out of old wetsuits and cutting-room scraps. Kelly Slater, the world’s most famous surfer, who founded his brand Outerknown in 2015 in Los Angeles, is riding the same wave. At the end of 2021, Outerknown launched Outerworn, a platform offering customers a chance to buy and sell pre-loved pieces. “It keeps our items in circulation longer,” says Slater. “I spend so much time in the ocean and it’s easy to see how much damage we’re causing to the environment,” he adds. “I wanted to offer something better to people who care about surfing but also care about the planet.” Since its inception, Outerknown has been Fairtrade-certified and Fair Labor-accredited. In 2020, it launched a 10-year plan to reach new sustainability goals (by 2030, the brand hopes 100 per cent of products will be circular). Going forward, Slater hopes to attract consumers beyond the waves. “We’re evolving our product to offer a better assortment and attract new customers who may not sit in the surf world, but still care about making better choices in what they wear.”