Step into the Dior garden

We’ll send you a myFT Daily Digest email rounding up the latest Womenswear news every morning.

Christian Dior’s Spring/Summer 2020 womenswear collection — designed, as it has been for the past three years, by Maria Grazia Chiuri — was a paean to the garden. Chiuri’s approach began with Christian Dior’s passion for flowers, along with Dior’s sister Catherine’s horticultural leanings (among her many gardening activities she sold blooms at the Les Halles market in Paris).

Chiuri carried the inspiration through to the present day, and, according to her show notes, she was not aiming for a “revival of decorative tradition.” Rather, she was considering, “above all,” what it means to “respect” life and “protect” nature, now.

The models walked through a set created in collaboration with a botanical and urban landscape group called Coloco. There was a square of transportable trees, which will contribute to forestation initiatives in and around Paris (as in, the saplings will soon find permanent Gallic homes, having finished their ostensible modelling jobs). Was Chiuri ultimately heading in a more eco-friendly direction? To some extent, yes; the greenness of the stage doubtlessly had an environmentally positive intention. But the clothes, the designer admitted beforehand, less so; there had not been a consideration of recyclability regarding the fabrics. The set came first, and while it was beautifully constructed, it would have been nice to see some of that sense of responsibility carry over to the garments.

But, any dissonance aside, a lot of the clothes Chiuri did come up with were in fact lovely — with some even hearkening back to the lightness of her work as the co-lead at Valentino (where she was employed before taking the Dior role in 2016). The house’s hit Sac Dior Book Tote, now alive with petals, will be popular. As will a huge range of semidiaphanous dresses with subtle-hued embroidered fronds and stalks, perforated boots and beach-friendly “J’Adior” tie-on bracelets. Chiuri’s myriad earthly expressions ran the gamut from one of the first dried flowers on record in France, found during a research trip to Paris’s Natural History Museum, to adaptations of the florets viewed in Ogawa Kazumasa’s Group of Morning Glories painting from 1896 (this image was pinned to the designer’s mood board). And, like any garden, nature will always take over; this collection had a satisfying, sophisticated looseness about it. The takeaway: clothes that will work from manicured estates to lusher and wilder terrain. 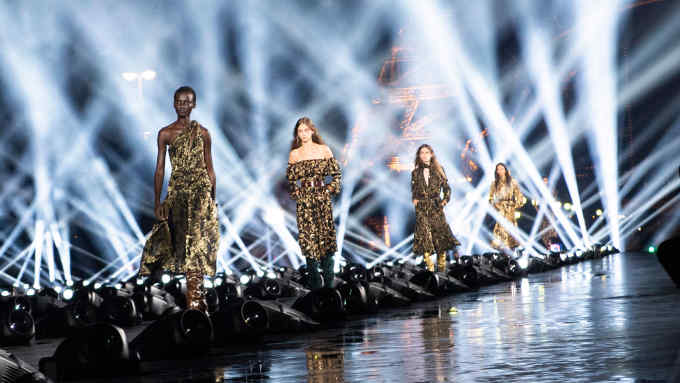