The threat of conflict over water is growing

“The wars of the twenty-first century will be about water, unless we change the way we manage water.”

That statement was made by Ismail Serageldin, the vice-president of the World Bank, in 2009.

The world is yet to see its first unambiguous water war. But the concerns about the links between conflict and water supply have not disappeared. If anything they are becoming more acute.

The root problem is simply stated. The world’s population is growing and so is the demand for water. Meanwhile, the supply of fresh water is being depleted by climate change and economic development. As Brahma
Chellaney, author of the book, Water, Peace and War, puts it: “Freshwater is increasingly in short supply, with nearly two-thirds of the global population living in water-stressed conditions.”

The areas that are most water-stressed are often those that have experienced some of the fastest population growth. The population of Chad has grown from 3.6m in 1970 to 16.4m today. But over the same period, Lake Chad — which also borders Nigeria, Niger and Cameroon — has all but dried up.

The results have been devastating for the some 30m people who relied on the lake for freshwater supplies. Local farmers have seen their livelihoods destroyed. Many analysts draw a direct link between the increase in water scarcity in the area and the rise of Boko Haram, the Islamist militant group, which has terrorised much of northern Nigeria and the surrounding area. 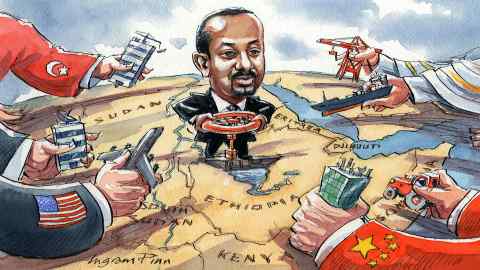 The instability in the Sahel region of Africa — much of it linked to desertification — has now become a security headache, whose ramifications reach all the way into Europe. France has waged an unsuccessful war against Islamist militants in the Sahel since 2013.

The French and other Europeans fear that the emergence of failed states and terrorist movements in the region will have more spillover effects in Europe. If people find life increasingly unsustainable in the Sahel, many more will make the journey north and attempt to cross into Europe. Illegal immigration from Africa and the Middle East into Europe has now become the hot-button issue for the far-right in France, Italy and Spain.

Concerns about water scarcity span the continent. It is a potential flashpoint between Egypt and Ethiopia — both countries with populations of over 100m people that are increasingly concerned about their water supplies. Ethiopia’s construction of the Grand Ethiopian Renaissance Dam on the Nile is intended to double the country’s electricity supply. But it is causing near panic in Egypt — where the waters of the Nile have historically been regarded as the lifeblood of the nation. The
Egyptians are unwilling to accept Ethiopian reassurances about their water supplies — and some in Egypt have even advocated bombing the dam.

There are similar bubbling tensions between China and India over water rights and the construction of dams. As Chellaney, professor of strategic studies at New Delhi’s Centre for Policy Research, puts it — “Almost all of Asia’s major rivers originate on the Tibetan Plateau, and China is erecting an expansive hydro-infrastructure to make itself the upstream water controller.”

At a time of rising tensions between India and China, the concern in New Delhi is that China might seek to use access to water as a chokehold over India. But India itself is a source of concern for neighbouring Bangladesh, which worries about its ability to access the waters of rivers that originate in India.

The situation of Bangladesh, however, highlights one of the paradoxes about water supply and geopolitics. The country is simultaneously concerned about too little and too much water. A scarcity of fresh water poses a threat to food supplies in one of the most densely populated countries in the world. But rising sea levels caused by climate change threaten to make large parts of the country uninhabitable in the coming decades.

Rising sea levels are indeed likely to become a new source of geopolitical conflict, since they will force the mass movement of people across borders as heavily populated areas become uninhabitable. Sir David King, a former chief scientific adviser to the British government, wrote in July that: “south-east Asia is at risk in just thirty years of losing four liveable areas. 90 per cent of Vietnam is now expected to be flooded once a year by seawater. One flooding with seawater of the Mekong Delta . . . will mean it is no longer in rice production. This is one of the biggest rice-producing countries in the world.”

The Indonesian capital, Jakarta, is simultaneously at risk from scarcity of fresh water and rising sea levels. The constant depletion of groundwater is causing the city to sink — and much of it was flooded following heavy rainfall earlier this year. Meanwhile, rising sea levels threaten its long-term viability. King predicts that: “Jakarta is not going to be a liveable city in 30 years’ time.”

Talk of “water wars” raises the vision of states battling to control increasingly scarce water resources. That is certainly one dangerous possibility. But the bigger threat to global security may be the increasing desperation of peoples — from sub-Saharan Africa to South Asia — afflicted by water shortages, or rising sea levels, or both.