‘Hell on earth’: survivors recount the assault on Mariupol | Free to read

In the besieged city of Mariupol, scene of the heaviest fighting in Russia’s three-week war in Ukraine, people are so hungry they are killing stray dogs for food.

Dmytro, a businessman who left the city on Tuesday, said friends told him they resorted to this desperate measure in the past few days after their supplies ran out.

“You hear the words but it’s impossible to really take them in, to believe this is happening,” he added. “It is hell on earth.”

Once one of Ukraine’s most important ports, Mariupol is now a charnel house, a city of ghosts. For more than two weeks it has been subjected to a Russian bombardment of such intensity that it has turned whole neighbourhoods into piles of smouldering rubble.

After days of punishing aerial and artillery assaults that broke Mariupol’s three lines of defensive fortifications, Russian troops have now entered the city centre, with heavy fighting reported on some of its main shopping streets and near Theatre Square, a key landmark.

On Sunday night, Russia gave Ukraine until 5am local time to decide whether to surrender Mariupol. Its defence ministry said it would allow Ukrainian troops to leave the city, but only if they lay down their arms. Ukraine rejected the ultimatum.

Russian forces are already in control of Livoberezhnyi Raion, or left-bank district, in the east of the city, as well as Mikroraiony 17-23, a string of residential neighbourhoods in the north-east, said Anna Romanenko, a Ukrainian journalist who is in close contact with Ukrainian forces there. “The front line runs right through Mariupol now,” she added.

Dmytro, who declined to give his surname, was one of a number of Mariupol residents the Financial Times contacted by phone after they had been evacuated over the past week to the Ukrainian-controlled city of Zaporizhzhia, about 230km to the west. All described an assault so brutal it had destroyed the city, killed and maimed countless civilians and left deep scars on the survivors.

Everything was burning, there were corpses everywhere

Mykola Osichenko, chief executive of Mariupol TV, said his abiding memory of the past three weeks was the feeling of utter powerlessness. “When the bombs fell, I would routinely cover my son with my body,” he said. “But I knew that I couldn’t really protect him, that it was an act of desperation.”

Strategically located on the Sea of Azov, the gateway to the Black Sea, Mariupol was in Russia’s crosshairs from the start of the war. From just a few days in, its forces started launching missiles at the city in an onslaught that severed its electricity, gas and water supplies and left its 400,000 residents cowering in freezing shelters, hugging for warmth. Mariupol authorities said 2,400 residents of the city had been killed since Russia launched its invasion.

Survivors described desperate attempts to stock up on supplies while bombs exploded around them. Dmytro said he visited the central market last Sunday after it had been flattened by a Russian artillery attack.

“Everything was burning, there were corpses everywhere, and I was just walking through, picking up a cabbage here, a carrot there, knowing it meant my family would live another day or two,” he added. “You become completely desensitised.”

Witnesses depicted post-apocalyptic scenes of stray dogs eating the remains of bombing victims who lay unburied on the street. Civilian casualties have been placed in mass graves or buried in the courtyards of houses: proper funerals are too dangerous.

Russia’s medieval-style siege of Mariupol also left its residents facing an acute shortage of both food and water. With no gas, they cook food on camp fires made from broken furniture in the courtyards of their houses.

Osichenko said people in his house, desperately thirsty, drained water from radiators, collected and melted snow and also scoured local parks for freshwater streams. “But queues would form there and that was a perfect target for Russian missiles,” he said. The streams also fell out of favour because they quickly became contaminated by corpses.

Images posted on social media have chronicled the extent of the devastation — huge apartment blocks turned into infernos after suffering a direct hit, the flames sending vast columns of black smoke into the sky, roads strewn with the burnt-out hulks of ruined buses and cars reduced to mangled heaps of metal, the 10m crater left by a bomb dropped on one of Mariupol’s children’s hospitals.

Authorities sounded the alarm after Russian planes bombed the city’s main municipal theatre last Wednesday, raising fears for the hundreds of women and children who had been using its cellar as an air-raid shelter. It is still unclear how many people were killed or injured in the attack. Russia denies targeting civilians and has accused the Ukrainian authorities of using them as human shields.

FT Magazine
An illustrated diary from Kyiv: ‘I do not draw the houses, but the force of death’

Now residents face a new danger: evacuation to parts of Russia, where an uncertain fate awaits them. Potential evacuees are first questioned by Russian officials, who “test them to see if they are trustworthy”, said Romanenko. “They check their social media feeds for anything anti-Russian.”

She said Russian forces sent a friend of hers from the Livoberezhnyi district to Novoazovsk, a small town to the east of Mariupol that is controlled by pro-Russian separatists. “They interrogated him, took away his Ukrainian passport and sent him to Rostov, across the border in Russia,” she said. She hasn’t heard from him since.

Many other residents have taken advantage of the rare moments of calm between bouts of shelling to leave Mariupol for Ukrainian-controlled territory, forming long convoys of private cars that are forced to run a gauntlet of dozens of Russian checkpoints. A journey that in peacetime can be done in around two and half hours now takes 16 hours.

Romanenko, who was born and grew up in Mariupol and has lived there all her life, is now in Zaporizhzhia, a refugee. She said she was heartbroken over the fate of her city — but is determined to return, one day, “and do everything I can to rebuild it”.

“I will go back once the Russians have gone,” she said. “It’s where all my ancestors are buried. I can’t be happy anywhere else.” 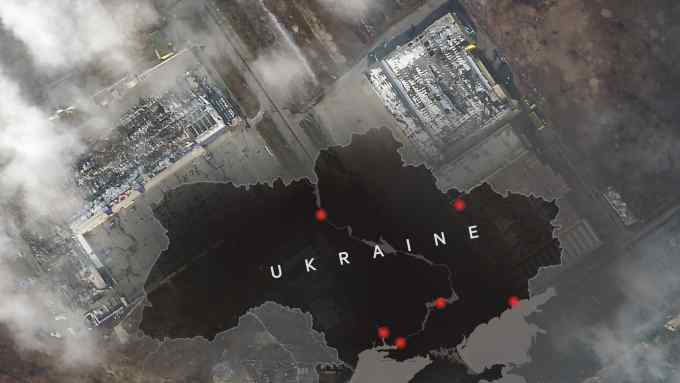