Zoë Buckman is needling the patriarchy

High above West Hollywood’s Sunset Strip, a 12ft rotating neon sculpture of a uterus with fibreglass boxing gloves in place of ovaries shines out over the racing traffic. Champ, by New York-based British artist Zoë Buckman, was installed just a few weeks before the 2018 Academy Awards, but following the recent US Supreme Court decision to overturn Roe vs Wade, its bright, white light shines with new intensity.

Zoë Buckman is not a household name just yet. But if the past few years are any indication as to what the future holds, the 36-year-old Hackney native seems poised to become one of her generation’s most important feminist artists. Curators mention Buckman in the same sentence as Louise Bourgeois, Mary Kelly, Tracey Emin and Sophie Calle; her works are increasingly included in group shows with these women, as well as other artists of influence, such as Lorna Simpson and Carrie Mae Weems. The Baltimore Museum of Art, The Studio Museum in Harlem, and the Chrysler Museum of Art in Norfolk, Virginia, have all acquired pieces for their permanent collections, and her last solo show, Nomi, sold out despite being held online due to the pandemic. Prices, which range from £4,000 to £80,000, reflect growing interest. Buckman’s new solo show, Bloodwork, which opened at Pippy Houldsworth Gallery this week, is also poised to leave an impression: its run-up saw a wave of pre-show enquiries – both from private collectors and museums.

Like many of the artists she admires and is compared to, Buckman works across multiple mediums, from neon and embroidery to sculpture and film, creating pieces that represent her personal and shared experiences of heartbreak, violence, miscarriage and abortion, and exploring issues around equality, recovery and power. It’s raw, honest stuff in a deceptively attractive package: just as you are drawn in by, say, a beautiful item of vintage lingerie or delicate piece of lace, you are taken aback by the words Buckman hand-embroiders on them. One piece of vintage textile, for example, features the words “It Stings, I Sob”. Casey Fremont, executive director of the Art Production Fund, which commissioned Champ, says: “She gives a voice and draws attention to things that many people are afraid to talk about. These are things she’s able to bring to the popular conversation, and that’s important.”

I meet Buckman at her studio; it’s a corner of the loft-style Brooklyn apartment where she lives with her 11-year-old daughter Cleo, who she co-parents with her ex-husband, actor David Schwimmer. Make-up-free, except for a glittery silver manicure, and wearing high-waisted red carpenter’s pants with a tank top and showing a smattering of tattoos, she is casually cool.

Embroidered artworks for the upcoming show are tacked to the walls; sculptures (or “clusters,” as she calls them) of boxing gloves covered in vintage fabrics hang from the ceiling. “This is my abortion and miscarriage cluster,” she explains of one in shades of pink and red. “And this one is titled Dilation and Curettage.” Though they were inspired by pain, they are beautiful. “I want you to see that way,” she says, “because I want to speak about things in their totality. That’s the thing, isn’t it, there is that dichotomy of a positive experience in a negative one.”

Dichotomy and opposition are words that come up over and over again in describing Buckman’s pieces. A previous series, Every Curve, featured vintage lingerie with lyrics by the late rap legends Notorious BIG and Tupac Shakur, including a silk slip embroidered in turquoise with, “You showed me the definition of feminine, the difference between a pack of bitches and black women” and a bra saying “Bitches I like them brainless”. Buckman uses embroidery to reclaim power: “It’s like, you can control everything, you can see when you have made a mistake and so you can rectify that very quickly.” But it’s also a constant, a comfort: “Practically speaking, it works really well for a new mum,” or when she was “flying to London to look after my mother who was dying. I would take a piece with me and I would sit on her bed, give her some morphine, we would chat, I would sew, she would help me title a piece, she would iron it for me.”

Bloodwork comes on the heels of a high-profile divorce, two significant yet ultimately disappointing relationships, and the death in 2019 of her mother, Jennie Buckman, who had an incredible influence on the entire Buckman clan: Zoë, her fraternal twin Joshua, a clinical psychologist, Michael, a filmmaker, and her half-brother Joe, a set builder. “She was an enabler of creativity,” says Michael of their mother, who was head of acting at RADA (and taught the likes of Daniel Craig, Tom Hiddleston and Sophie Okonedo) and an accomplished playwright. Yet Buckman is sanguine about her experiences: “I feel like I’ve been operating more and more from an intuitive place, and that just takes time. This is the strongest I’ve been emotionally… and I have definitely made the strongest work I’ve ever made.”

The show features a series of embroidered portraits of women, all of whom are in pain or healing, dancing ecstatically: throwing their hands up, their mouths open and their heads back. “Although it is called Bloodwork,” says Buckman, referring to the medical term for blood tests, “and it is I guess littered with blood and pain and whatnot, I’m not asking viewers to feel sorry for me… It’s about what it is to be in these bodies that are the ones often left to pick up the pieces – physical, emotional, spiritual, financial even – and do the healing. And we do heal, in spite of these experiences that we have... We can still exude so much joy and resilience, we can still throw down at a dance party, and rave with our gals or our gays.”

Also debuting is what Buckman believes is her most significant work to date – Show Me Your Bruises, Then, a video installation written and directed by her, produced by her brother Michael, and shot at their late mother’s table in their family home. The film, based on Buckman’s 2018 long-form poem about multigenerational experiences of domestic violence, is a three-channel video installation featuring Zoë herself and actors Cush Jumbo and Sienna Miller. The title is something an abusive ex-boyfriend said to her, but the poem also explores the experiences of other women in her life including her mother. “I was deeply moved; the words were powerful, truthful, non-manipulative,” says Miller via email. “She’s incredibly poetic – it felt like a very powerful stream of consciousness. I was blown away.” It was Miller who convinced a reluctant Buckman to cast herself in the work, noting: “The story is hers. No one could ever say it more beautifully than her.”

HTSI
The Cause: meet your new bag for life 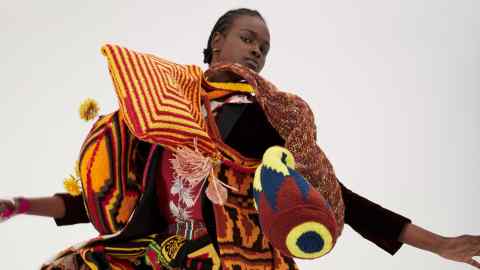 It’s also another way for the “unapologetically ambitious” artist – who has another to-be-announced public commission and a Times Square Arts Midnight Moment digital installation coming up – to push herself out of her comfort zone. “I make didactic work that’s not just telling you something. I’m trying to make work that at least visually brings people into the conversation,” she says. “We can effect more change when we engage with people and create spaces for conversation, rather than shouting.”

Bloodwork is at Pippy Houldsworth Gallery until 1 October