ArcelorMittal to sell US steel assets for $1.4bn

ArcelorMittal has agreed to sell the bulk of its US steelmaking assets to rival Cleveland-Cliffs for $1.4bn in a shares-and-cash deal that will offer a degree of consolidation in an industry long plagued by oversupply and volatility.

The Luxembourg-based group said it would receive $500m in cash and the rest in stock for a division that had revenues of $9.9bn last year and includes mines, blast furnace plants, mini-mills that recycle scrap and finishing facilities.

ArcelorMittal said the divestment would help it reduce net debt as it seeks to bolster its balance sheet, which came under strain after demand for the grey metal slumped during the pandemic and forced the company to raise $2bn in capital.

Shares in Amsterdam-listed ArcelorMittal were up 8.3 per cent in morning trading on Monday. Nearly all of the cash proceeds from the disposal will be spent on share buybacks.

“This transaction is a unique opportunity for ArcelorMittal to unlock significant value for shareholders while retaining exposure to the North American economy through our high-quality Nafta assets alongside a participation in what will be a stronger, better integrated, US business,” said chief executive Lakshmi Mittal.

Industry observers have argued for consolidation among steelmakers to create better economies of scale and enable the closure of surplus factories, a global problem that has weighed on prices and earnings in the sector. 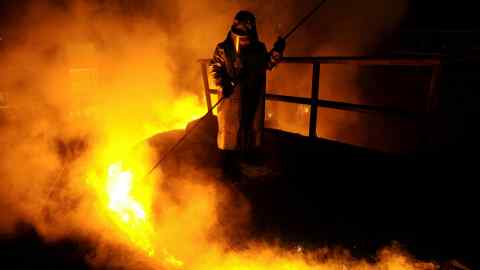 The Cleveland-based company said it would become North America’s largest producer of flat-rolled steel, which is used in manufactured goods from car bodies to domestic appliances, with combined shipments of 17m tonnes last year. It will also be the continent’s biggest producer of iron ore pellets, a key ingredient for steelmaking, while the combination will generate an estimated $150m in annual cost savings.

“Steelmaking is a business where production volume, operational diversification, dilution of fixed costs, and technical expertise matter above all else, and this transaction achieves all of these,” said Lourenco Goncalves, chief executive.

Cleveland-Cliffs will take on $500m in net liabilities and $1.5bn in pension and other retirement benefit obligations, giving the business it is buying an enterprise value of $3.3bn. ArcelorMittal said this was equivalent to six times “through-the-cycle” earnings before interest, tax, depreciation and amortisation, which on an adjusted basis averaged $700m in 2019 and 2018.

Following complaints about China and other countries offloading excess material on international markets, US steel producers have benefited from heavy tariffs levied by President Donald Trump on foreign products.

The companies expect the deal to close in the fourth quarter, subject to regulatory approval. The acquisition does not include the modern Calvert processing mill in Alabama, which ArcelorMittal owns in a 50/50 joint venture with Japan’s Nippon Steel.