Female jewellery designers take Japan to the rest of the world

An exhibition this summer at The Scottish Gallery in Edinburgh, provided a showcase for art jewellery by some of Japan’s leading female jewellers. A Japanese Design helped draw attention to this exotic jewellery niche. To this day, it remains more popular overseas than in Japan.

The style of the pieces on show was as wide-ranging as the designers’ skills. As gallery director Kirsty Sumerling explains, the exhibition included “Miki Asai’s delicate seashell and lacquer work, to Yoko Izawa’s feather-light, hand-dyed nylon constructions, to the structural jewellery from Etsuko Sonobe”.

International clients are drawn to Japanese designs because of their use of “surprising” materials. “The hand-dyed nylon used by Yoko Izawa allows her to create larger, petal-like constructions that remain light and extremely wearable,” says Ms Sumerling.

“To give shape to the inspired image, I knit, twist, entangle, and fold a single round wire, a thin ribbon-shaped plate, or cassette tapes and threads to create a three-dimensional object. These times are like a meditation for me to ponder what I want to express,” she says.

“One day, I found old cassette tapes in the closet. Cassettes I loved when I was young. I wanted to listen to the music with nostalgia, but realised I had no device at home. I felt the speed of change in our life. By creating works with cassette tapes that contain impressive songs, I want to connect those memories and industrial technology and life into my works.”

Ms Unno thinks of her pieces as jewellery rather than art, despite their hybrid nature. “I would say it is jewellery, because I think my work will only be completed when it meets the wearer. People do sometimes collect my pieces just to display,” she says.

From her base near Mount Fuji, she says: “In Japan, there are still few people who think of jewellery as art. Most think of jewellery as precious stones and metals. Some cannot accept paying a lot for jewellery that does not use precious metals and gems. I think this is due to the short history of Japanese jewellery culture. The custom of wearing jewellery began with the [late 19th-century] Meiji era. In Japan’s jewellery world, it seems more difficult for females to be independent and recognised than males,” she says.

Living in Denmark has helped Ms Unno’s contemporary, Kaori Juzu, find her feet. “My pieces are art in a jewellery form that people collect to both wear and display,” she says.

Based on the Baltic island of Bornholm, Ms Juzu sells pieces through contemporary art jewellery galleries and markets in Europe and the US for between €250 and €2,800. She has upcoming exhibitions in Paris, Ireland, the UK, Poland, the US and Japan.

“I have gained recognition in Denmark, even though I’m not Danish,” she says. “The system to support artists in Scandinavia is far better than Japan. I can’t find anything that I can compare with the Danish system in Japan. In Denmark and Europe, contemporary art jewellery has gained recognition. In Japan, if it is not commercial, it is difficult. Contemporary jewelleries are not yet ‘art’ enough.”

“That’s the case with Nagano. She was a Japanese painter for many years before moving into artistic jewellery. She uses origami to give shape to her pieces, but in a new and unexpected way.” The artist’s work is in the permanent collection at the Alice and Louis Koch Collection in Zurich and in London’s Victoria and Albert Museum.

Equally original are the sculptural pieces by Kazuko Nishibaya. “I describe my work as plain three-dimensional sculptures in metal. In my design, the shape is important, but just as important are the voids, the emerging interspaces throughout the process of creation,” she says.

She does, however, have a problem with the term “art jeweller”. “The word jewellery doesn’t translate into my work,” she says. “For me, art and jewellery do not reside in the same category, even though they share a similar process of creation. Contemporary jewellery needs a new name, a name of its own. ‘Wearable objects’ maybe.

“In my line of work you will find many more female than male jewellers. I’d even say we are the majority. My teacher, Minato Nakamura, is among them. Well known in Europe is Etsuko Sonobe. Whereas in the academic world, you mainly find male jewellers in prominent positions.”

Perhaps that explains why Yoshimi Kawabuchi from Tokyo’s Gallery Deux Poissons is one of the few galleries in Japan selling these pieces. Mr Kawabuchi works with designers such as Kazuko Mitsushima (also on show in Edinburgh) and opened the gallery in 2003. “Contemporary jewellery is more popular in Europe, especially in Germany,” he says. “Unfortunately, contemporary jewellery collectors have hardly grown up in Japan.” Some of the artists he says are popular in Japan, include Mitsushima, Sonobe, Nagano and Môko Kobayashi.

Their works are among those sold by New York gallery Charon Kransen Arts in the US and beyond. Mr Kransen says “people are attracted to the je ne sais quoi that makes Japanese work so unique”. “Makers in Japan take their time on whatever they make. They understand that every process deserves its specific rhythm and time. It shows respect. In a way, there is a certain absence of time in the work.”

Iowa-based Satomi Kawai is a Kransen artist. “My work is not commercial jewellery using precious stones and metal but contemporary art jewellery,” she says. Her pieces are in permanent collections like the Alice and Louis Koch Collection. A necklace belongs to the Olnick Spanu Collection in New York. Another is with the Cominelli Foundation Permanent Collection in San Felice del Benaco, Italy.

“My background as a contemporary jewellery artist is not common in Japan. My art education started in the US after I moved there in 1999,” Ms Kawai says. “Art jewellery is not highly recognised or appreciated in Japanese culture, compared to western culture. Not many art jewellery galleries are available, even in Tokyo.”

As to the jewellery versus art question, for Mariko Sumioka, what is important is that her pieces are worn. “My jewellery is inspired by architectural forms, texture and structures, and I often make them into box shapes inspired by architecture, treasure or jewellery boxes,” she says. “The stories told inside these miniature precious compositions are unfinished — the wearer has to invent the rest. My work is art jewellery. And I would like people to wear them. Jewellery has to become part of someone’s fashion, lifestyle and personality. I don’t like it sitting in the cabinet.” 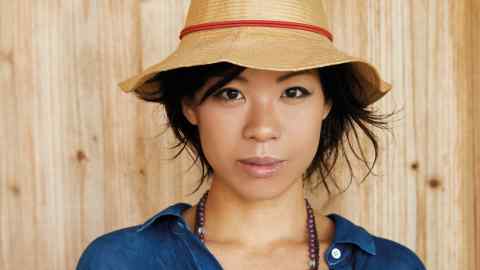 Her materials include antique kimonos from her grandmother’s house. (Prices range from £90 to £3,000). She is currently participating in a virtual group exhibition at the Mobilia Gallery in Massachusetts.

“I think it is much harder than in any other western country to survive as an art jeweller in Japan because there is not an established contemporary jewellery market here. People prefer more commercial pieces to unique designs,” she says.

Get alerts on Luxury goods when a new story is published