The season’s most talked-about show: Celine by Hedi Slimane

No show has captured the attention quite like Celine this season. No event has been more controversial, nor provoked more opinion. The conversation, even well after Hedi Slimane’s debut, still rages around his name.

When Bernard Arnault “acquired” Slimane in March to run the creative direction of Celine, he had a very clear plan in mind. Under his watch, he expected Slimane to double or triple the revenues, of around €800m, in short order. He wanted to expand the offering to include perfume, menswear and couture. The leather goods category, which Arnault acknowledged was performing well under Phoebe Philo (who left the house in December), would be similarly expanded.

There was little or no expectation that Slimane would retain the house codes established by Philo and beloved of the professional woman. Arnault was clear he wanted a different client — the younger millennial who bought into Slimane’s Saint Laurent. He actually said “rock chic” and “cool kids”.

I’m not going to cry about the fact Slimane’s “Paris La Nuit” men’s and womenswear debut at Celine on Friday night obliterated everything its former designer stood for. I’m not going to blub about how a catwalk that once offered chic solution clothes in which a woman could walk with confidence, was now awash with groupie-boy tailoring and broken ballerina dresses in which a 17-year-old girl might walk the streets. You can feel all the fuzzy-edged nostalgia you want for Obama, but that doesn’t change the fact we got a Trump. And let’s not forget, Philo left us first.

Hedi Slimane’s Celine was 100 per cent Hedi and it would have been naive to expect any different. He first developed his signature undernourished silhouette at Dior Homme in the early 2000s and then worked it at Saint Laurent. What he showed at Celine — whip-thin tailoring (designed for men and women but mostly worn by skinny boys); crotch-skimming cocktail dresses; sparkly sheer blouses, bold-shouldered blazers, cropped tuxedos, leather bombers — was precisely what he’s always done.

As with most of his collections, I ignored the glittery fascinators, sequin-encrusted dresses and puffball microskirts, and concentrated on the merchandise — the bags, the shoes, the suits. I’ve always been a sucker for Slimane’s tailoring and it was just as persuasive here. A pair of women’s trousers, cut with an exaggerated volume on the hip and worn with a cropped tuxedo, white shirt and narrow black tie, looked great. The men’s suits likewise. I would have liked to have seen more shoe variations: most looks were worn with a heavy, strappy ankle boot. I preferred the men’s options — a monk-strap shoe and pointy Oxfords — which I imagine will come in my size.

If I were picking things off a rail, no question I could dress myself in the new Celine. Slimane’s success has been defined by his skill in “wardrobing”. But the show was still a head-scratcher. Like, for example, why didn’t LVMH just give Slimane his own label? He clings on to the dogma of his aesthetic so tenaciously, and his clothes remain the same regardless of the label — why not just put his name on them? It’s not so much that I care about preserving a brand’s heritage. Look at Gucci or Balenciaga — I’m all for ripping up the codes. I just think if his brand is so powerful, why not create a new one of his own? I assume that having the infrastructure of an older heritage brand makes it easier to manufacture, but it also speaks perhaps of the underlying feeling that, as with so much of what is going on in the industry, this investment is about the short-term gain. Slimane will stick around for a couple of years and then go somewhere else.

Secondly, I’m not sure about the maths. Arnault expects Slimane to double revenues at Celine, which is fair enough when you consider the designer took Saint Laurent from €400m to €1bn. But, at Saint Laurent, he was doing something different. Can history repeat itself when you’re selling the same product you can buy two stores along the road? Many of Slimane’s original designs — the permanent collection — are still on sale at Saint Laurent. LVMH is clearly prepared to jettison the client base that took Celine revenues to €800m, but just how much will it have to spend on marketing to get the Slimane groupies along?

And, lastly, how relevant is Slimane’s design, two years after having been out of the picture? The world has seen a huge cultural shift in the interim and the politics of clothes have arguably changed. The Celine show seemed to celebrate a world preserved in aspic — super-skinny, teenage, and near exclusively white. I was hoping we might have moved on. 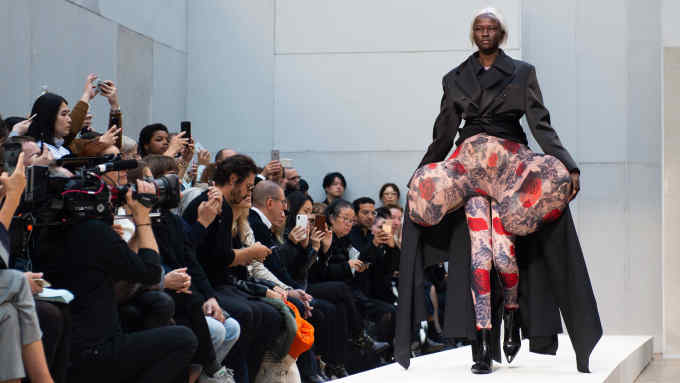