London SS19 round-up: why British fashion is worth the investment

There may be trouble ahead, but the London collections were bold, brave and beautiful

Caroline Rush, chief executive of the British Fashion Council, opened London Fashion Week with the good news. “We have new data,” she told assembled guests at the launch breakfast. “We are worth £32bn in GDP to the British economy. That’s 5.4 per cent growth, against the economy’s 1.7 per cent, representing 890,000 jobs — an increase of 1.8 per cent, again outstripping national growth figures.”

There was further mention of the nearly million people now buying, selling and marketing British creative talent. And then Stephanie Phair, who took over as BFC chairman from Natalie Massenet this year, stepped in to deliver the news that no one wants to hear.

Public funding is shrinking. The unknowables of the Brexit deal are biting investment. Tourist spending on luxury has soared in London as the pound has weakened, but younger brands are struggling to scale. Manufacturing is headed off a cliff. “As public funding services deplete, we will urgently look at how we can fund and sustain through the private sector the support we provide to all of you,” said Phair. “Whether [that’s] new designers, established brands with a 10-year track record, or our large global businesses that need voicing on their behalf.”

In the forthcoming months, Phair will focus on finding more support for those who need to grow their businesses. “Digital will play a key part,” said Phair, who joined the BFC from the London-based ecommerce platform Farfetch. “We now consider it a transversal muscle flexed in everything we do.” Transversal what? She went on. “We will bring together chief executives from broader businesses to identify challenges, share knowledge to overcome these and set high standards for businesses to operate through our Positive Fashion stream of work.” Moreover, pre-Brexit, she is engaged in “a constructive dialogue with government to ensure our businesses are prepared to argue the case where damage could be done.” Good luck with that.

Echoes of her words reverberated throughout the shows. London Fashion Week, which is dominated by younger, less established, and mostly independent brands, has always had to fight for its survival. JW Anderson and Nicholas Kirkwood (the shoe designer who presented a first full show this season) are both swaddled with LVMH backing. Burberry is a huge global brand. But many must scrabble on. And while the capital’s numerous prize opportunities and awards are useful in getting stripling designers off the ground — and have been invaluable in boosting London’s reputation as a fulcrum of creativity — for more established labels, they don’t go far enough.

What happens at three years, when you need to launch accessories to bring in new clients? Or at five, when you still can’t afford to build an e-commerce site? Victoria Beckham presented her show on the London schedule for the first time since launching her label 10 years ago, while the business pages delighted in describing her brand’s £12m losses. Most designers can’t afford to keep plugging debts such as Beckham’s, but in the battle to break even she is by no means alone.

Despite their relative youth, London brands have powerful signatures. This season, many stuck to what they do best. Simone Rocha delivered a breathtakingly lovely collection that brought together 19th-century Chinese portraiture and Irish Sunday Best — and looked very much like her previous shows. Other brands were ready to stretch themselves. Erdem was a nice surprise. Already a master of prim, romantic Edwardiana, for SS19 Erdem Moralioglu explored the culture of the Victorian cross-dressing to deliver a dramatic collection that looked beautiful and brave.

Other transitions were less successful. Molly Goddard, only three catwalk shows in to her label, was shifting away from the large smock silhouette that made her name: this season she introduced knitwear and bags. Michael Halpern, having scintillated the industry with metallic diva sequins for his debut in February 2017, was experimenting with new colourways and styles. I felt anxious on their behalf. The industry’s insistence on newness leaves little room for a gradual evolution, so designers must constantly pick up the pace. It’s exhausting.

There were “oooh” moments, too. Victoria Beckham’s SS19 was confident and womanly: stuff the haters, I know her brand will one day make good. Just wait till she launches her beauty line. JW Anderson, now armed with an LVMH-group chief executive, continues to go from strength to strength. Richard Quinn made up for not having the Queen in his front row this season by filling it with secondary school children instead; his Gatsby-inspired florals were truly inspiring. And at Chalayan, a quiet, meditative affair at Sadler’s Wells, we were reminded that fabulous technique and true wearability never go out of style.

All of that, and a first Riccardo Tisci show at Burberry, at which the Italian 44-year-old offered his highly exportable take on what makes British style, and crowds of customers queued on Regent Street to buy the brand’s first “drop”. The heritage label has ditched the ready-to-buy strategy adopted by its former chief executive Christopher Bailey, but will be releasing the collection in smaller parts over the forthcoming months.

Needless to say, barely any of the London designers mentioned in this piece were born in Britain. They come from all over the world and have made the city their home. I shudder to think of what Brexit will do to the UK fashion business, our valiant but flailing manufacturing industry, or our creative reputation. But I’ll make that my only Bremoan. 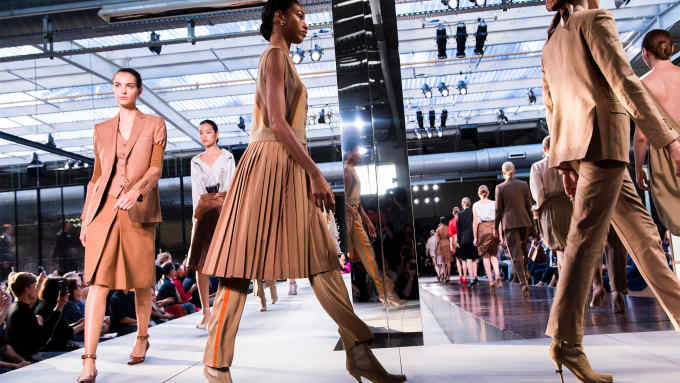