Louise Giovanelli is explaining the inspiration behind one of her new paintings, set to appear in her debut show at Bermondsey’s White Cube. The Monmouth-raised artist, 29, is near to finishing a portrayal of a strange, glittery hand, delivered in her signature luminescent oils, holding a large glass of wine. Like much else of her work, it’s seductive, ominous and enjoyably hard to read.

“I was thinking about that Caravaggio painting of Bacchus, the god of wine,” says Giovanelli. She’s a quiet but sure presence in a black hoodie, black jeans, black trainers – a suitably utilitarian look in her vast, peppermint-green-painted studio space, housed in a former tram depot in Manchester. Then she pauses. “Have you ever seen Ab Fab?” The other big muse here is, it turns out, Patsy Stone from Absolutely Fabulous, who is often seen clasping a glass of plonk or a fag. “I was just trawling through episodes, trying to find images of her overtly holding the glass,” she chuckles. “It’s quite stylised. It’s a bit like in old Flemish paintings.”

This is pure Giovanelli: somewhat unusually for her generation, she draws on the traditions of the Old Masters to create something hypnotically fresh. Her technically virtuosic paintings, revelling in oil’s capacity to luxuriate in certain textures – large, swishy curtains, thick braids of hair or a pop star’s statuesque legs – have made her a hot commodity in the art world. White Cube has quickly signed her up for London representation. Next month, she’ll take over two of the gallery’s cavernous south London spaces.

“There’s an intriguing ambiguity in the pictorial fragments Louise chooses to represent,” says Susan May, global artistic director at White Cube, “along with capturing the evanescence of light in the paintings, be it reflected or refracted… She is able to deftly reference art historical tropes of Renaissance and 17th-century Dutch painting, yet through a resolutely contemporary lens.” The actor, collector and art podcaster Russell Tovey, an early collector of Giovanelli’s and now a friend, agrees. He especially loves how she provides a fresh perspective on pop culture. “Moments we may have missed are given vitality and importance, making every painting a fascinating and intriguing experience,” he says.

You have to learn the traditions, and then you can undo all of that. But if you don’t know what you’re undoing, then you’re just making a mess

In Manchester, Giovanelli seems quietly confident about the newfound attention: “It’s a different level, but I’m ready for it,” she says of her preparations for the installation, which has meant getting into the studio at 6am every day to complete the final phase of work. Against one wall, a vast triptych of green-yellow curtains – her biggest yet – is nearly finished. Across the room sits a new “Carrie” painting, a grimacing, shimmering woman inspired by the Sissy Spacek horror film. In another corner are propped those pop-star legs sashaying out of a slit-to-the-thigh dress. They belong, it turns out, to Mariah Carey. Giovanelli grabbed the image from a Christmas TV special. “But it’s not necessarily important that it’s Mariah Carey – it’s more the idea of the pop star,” she explains. Giovanelli, to be clear, has no interest in being literal (“it’s always better to suggest, rather than to illustrate”). She gestures to Carey’s huge high-heeled pins. “I wanted them to be a bit like columns, you know? Corinthian columns. Make them really majestic – dominating the space.”

Giovanelli doesn’t come from an artistic background: her Irish mother is a retired nurse, and her father a building inspector whose Italian family emigrated to the UK in the 1970s. They were and are extremely supportive of her ambitions. She was drawing and painting from a young age (portraits of stars like Jimi Hendrix or Marilyn Monroe, she groans). She spent hours on the internet and developed a deep obsession with the films of Andrei Tarkovsky and Wong Kar-Wai. “There was nothing really there for me to be influenced by,” she says of her autodidactic leanings. “So I had to find out for myself.”

Eventually she went to art school in Manchester, returning there after completing an MA in Frankfurt because she likes the city and it is, frankly, cheaper and easier to focus on work there than in London. Along the way she became fascinated with something that wasn’t on the curriculum – the Old Masters and their techniques. “I don’t think anyone nowadays in art schools gets taught how to paint or draw or any of those skills,” she shrugs. “I did learn a few useful things at art school, but all that sitting down, learning to shade and draw? No. I did it from looking at paintings and just being fascinated. Like: how did Velázquez do that? And Piero della Francesca? I suppose it’s quite a traditional way of learning anything: copying.”

Trawling galleries and museums, she would photograph the details that seized her – “contorted fingers, fingers in books, or the bottoms of dresses with tiny, tiny feet” – and replicate them back at home. Her favourite things were “weird baby Jesuses – they would have six-packs! You would never find one that just looked like a normal, conventional baby.”

For a long time, she felt like she was doing something obtuse. Oil paintings inspired by the canon, even if they do reference Diana Ross, aren’t a staple of every modern graduate show. “I thought I was very, very uncool. No one was paying attention at all. I thought, ‘Maybe it’s because I’m painting like an old man?’” Now she feels vindicated – and, she notes wryly, she sees more and more people doing similar things to her. To be clear, she is no reactionary: she loved learning about conceptualism, sculpture and video art. But she does think it’s good to know the basics. “You have to learn how to paint, and the traditions and the art history, and then you can undo all of that. But if you don’t know what you’re undoing, then you’re just making a mess.” 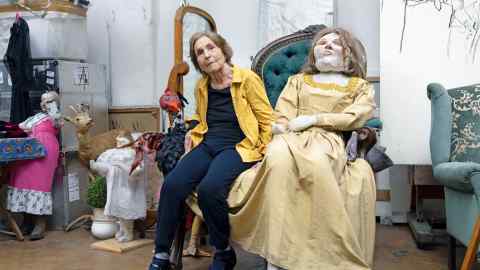 Walking around the studio, Giovanelli doesn’t want to over-analyse each detail she falls in love with. “I think if I ever did work out why I wanted to paint an image, then it would be dead.” Although, she concedes, “I suppose there is something there which has to do with the idea of contemporary spectacle… Even though none of us is religious any more conventionally, we are in ways we don’t fully realise or understand. We go to see bands and pop stars, and the cinema and television, we look at new icons – even on our phones.”

She stops at one canvas, which is particularly elongated and narrow. “I don’t know why,” she frowns, “everything’s just been getting taller and more stretched.” Aren’t they a bit like those old medieval panels of saints? “Yes,” she grins. “Or the iPhone format.”