Big Pharma on mission to bring immunotherapy to more patients

When the first cancer immunotherapies were introduced in 2014, oncologists hailed them as the biggest advance since the advent of chemotherapy in the 1950s.

But that early enthusiasm soon gave way to frustration: while the drugs appear to work remarkably well in some patients — such us those with melanoma or a subset of lung cancer sufferers — most patients derive no benefit at all.

Now drugmakers are engaged in a race to combine the drugs, known as PD1 checkpoint inhibitors, with other medicines, in an attempt to open up the benefits of immunotherapy to more patients.

The most notable success has been Merck & Co’s checkpoint inhibitor, Keytruda, in combination with chemotherapy. When given together, the two medicines can dramatically boost survival rates in patients with the most common type of lung cancer, according to a large, late-stage trial published in April.

Patients who received Keytruda in addition to chemotherapy were 51 per cent less likely to die during the trial than those on chemotherapy alone, the study of 616 participants found.

Regulators in the US approved the combination of Keytruda with chemotherapy last year, based on promising results from a smaller study that was not designed to detect whether the regimen could boost survival.

However, the treatment is expected to become more widely adopted after the data from the larger trial. European regulators — who declined to approve the treatment based on the small study — are also expected to give it a green light.

Roger Perlmutter, Merck’s most senior scientist, says he was “kind of stunned” by the results from the study. “If you look at all the traditional sensitivity measures like age, sex, and smoking, the combination is better, and meaningfully better, for everyone.” 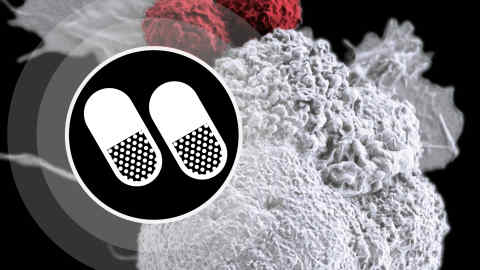 The combination also benefited patients with tumours that had low levels of a protein known as programmed death-ligand 1, or PD-L1.

For reasons that are not completely understood, patients with cancers that express high levels of this protein tend to do well on immunotherapies, while those with low levels do not.

Dr Perlmutter suggests that the chemotherapy acts as a kind of “pro-inflammatory” agent when it kills cancerous cells, and encourages tumours to release a substance that prompts the body’s immune system to attack.

Merck’s decision to test its drug in combination with chemotherapy will help it open a lead over Bristol-Myers Squibb, its closest rival in the field of immunotherapy.

Timothy Anderson, an analyst at Bernstein, says the results of the trial “confirm that Merck will remain in the driver’s seat in terms of immunotherapy . . . in the all-important first-line lung cancer market”.

That said, Merck also made a big bet on a once-promising combination that turned out to be a flop. Early trials had suggested that adding an experimental medicine called epacadostat to Keytruda could boost the number of patients who responded to immunotherapy — and without the side effects so often associated with chemotherapy.

However, the combination failed to boost survival rates in a large study of melanoma patients that was published in April. The bad news prompted Merck and Incyte, the biotech group that makes epacadostat, to cancel or scale back other trials of the combination.

Apart from checkpoint inhibitors, the most exciting area of immunotherapy has been a pioneering treatment known as chimeric antigen receptor therapy or Car-T.

The process involves extracting a patient’s blood cells, re-engineering them in a laboratory so that they can identify and destroy cancer cells, and then re-inserting them into the patient’s body.

Two versions of Car-T, made by Gilead and Novartis, are on the market after trials of the treatments showed they could extend the lives of even the sickest blood cancer patients — some of whom had been given just weeks to live.

An experimental version, being tested by Johnson & Johnson and Nanjing Legend, a Chinese biotech group, has shown promise in patients with multiple myeloma.

However, the laborious manufacturing process, which involves producing a bespoke Car-T for each patient, has resulted in some of the highest prices for treatment in the history of drugmaking. Novartis charges $475,000 for a round of Car-T.

The high price and cumbersome production means the treatments will probably be used only for the most severe patients, according to analysts.

Pharma executives have identified two ways of potentially speeding things up. The use of robotic technology to automate the process, which is still largely done manually by scientists in a lab, could lower costs and cut the time it takes to make a Car-T.

Some companies are investigating an off-the-shelf Car-T product made using cells from a cell bank rather than a patient’s own cells. This approach is known as allogeneic and it would be much cheaper than the so-called autologous process that has been used thus far.

“The Car-T technology is moving very quickly,” says Peter Lebowitz, global head of oncology at Janssen, the drugmaking unit of Johnson & Johnson. “There are a number of variables — autologous versus allogeneic and automation — and all of those pieces are moving at a rapid pace.”

The most advanced effort to find a one-size-fits all solution is being led by Cellectis, a French biotech company, which is developing a version codenamed UCART19. If it succeeds in trials, it could provide a blueprint for further off-the-shelf treatments, meaning that existing versions, which seem so futuristic, would soon become obsolete.