If you think the same, join us
How To Spend It Books

Pawson control: how does a minimalist eat?

Meals at Home Farm tend to follow a particular pattern. If it’s just John Pawson, the British architectural designer known for his minimalist aesthetic, and Catherine, his interior-designer wife of more than 30 years, they can sit down to fish every night of the week. “My favourite is a bit of white fish with salad,” says John, who likes his food simple. If Catherine is on her own, soup is perfect, whether gazpacho in summer, pumpkin soup in autumn or a delicately green-coloured courgette soup in winter with hits of basil and mint.

Low-key suppers for one or two have been a rare occurrence since last March, however, when the couple began sharing their home in the Cotswolds (they also own a house in Notting Hill) with two younger members of the family: Caius, 35, who runs Young Turks record label (home to FKA Twigs and The xx, among others), and Benedict, 30, who recently launched a talent agency for TikTok artists. “I’m cooking for three hungry men,” says Catherine, not complaining exactly, just acknowledging the new reality.

John, on the other hand, has more of a grumble. Apparently, the kids have been using his computer, hogging the bath and crashing their dinners. “Occasionally, they turn up and are shocked when there’s nothing for them,” he says in mock horror. These are reasonable complaints inasmuch as Caius and Benedict have their own laptops, showers and even kitchens. There are three kitchens in total at Home Farm: one at either end of the property in the barn and farmhouse and another in the wainhouse. They have no excuse not to cook for themselves.

In truth, John designed the house with his kids in mind. Largely derelict when it was purchased in 2013 and renovated over four years, Home Farm is a stunning 50m-long run of interconnected buildings, a temple of wood, stone and glass on the edge of an escarpment overlooking the Evenlode Valley. Given its spaciousness, John and Catherine always hoped it would become a family base and encouraged Caius, Benedict and their older sister Phoebe, who works for the Manchester International Festival, to visit. John may play the curmudgeon, but he and Catherine adore having the children around, particularly for mealtimes.

Both John, who grew up in Yorkshire, and Catherine, who was raised in South Africa, come from big families; each is one of five siblings. Whether it was Sunday roasts with his mother’s Yorkshire puddings or the huge outdoor barbecues that were a staple of Catherine’s early years, meals have always been a big deal for the couple. “I wouldn’t say sacred,” says John, “but every mealtime was special.” Now, at Home Farm, they are again. Throughout lockdown, there have been three proper meals a day. No microwaveable dinners here.

Catherine has always loved cooking, and Home Farm has been the perfect environment to expand her repertoire. “Ordinarily, we have a lot of friends of the children to stay at weekends,” she says of their pre-pandemic lifestyle. “I love trying to prepare lots of things – like aubergine parmigiana, venison ragu and fish pie – in advance.”

These and other culinary fixtures from Home Farm are now featured in a book co-conceived by John and Catherine. Home Farm Cooking is part design book about the property and part cookbook. It includes recipes by season and offers a window onto a way of life where, for example, there is zero tolerance towards clutter and you can take a punt out on your own pond. In short, my dream existence.

“White or green” is Pawson’s preferred shade of dish: “I don’t like too much colour on the table”

What prevents this book from being mere lifestyle porn is its accessible and very lived-in collection of recipes. From the winter and spring chapters, I tried the chickpea, baked feta and orange salad with beetroot, which was deliciously earthy and zesty; the scrumptious chicken, leek and ham pie, which I can’t wait to cook again for guests; a beautifully pure lemon tart; and some ginger Florentines, which turned into mid-morning treats for a week. And the list of other recipes I want to try is extensive. “At the moment, I love the saffron chicken tagine, the za’atar roast chicken and the goat’s cheese souffle,” says Catherine. “But my favourites are summer foods where there’s less intervention in the raw ingredients. Something like grilled peaches with mozzarella is my ultimate.”

John doesn’t cook himself. Left to his own devices, he resorts to bread and cheese. Or toast. But he does have strong ideas about how food should be presented. Twenty years ago, he co-authored another cookbook, Living and Eating, with writer Annie Bell, which is filled with bossy pronouncements on things such as how to set a table (no flowers to distract from the food; one type of glass for everything). The book is out of print but may be reissued after a New Yorker piece hailed it the “perfect” cookbook and reignited interest.

There’s a lot to be said for John’s ethos of pared-back refinement. “When we cook or entertain, our interest lies in perfection, rather than having a stab at something different or overly ambitious every time. Our aim is the ultimate tomato salad, the perfect roast potatoes and so on…” he wrote in Living and Eating. But if the food were left wholly up to him, the menu could get very restrictive. “White or green” is his preferred shade of dish. (“I don’t like too much colour on the table,” he tells me.) And there was even a discussion about whether to exclude certain “messy” dishes from the new book, though the ribollita, among other dishevelled gems, was too good to leave out. There is, however, one major upside to living with a minimalist. John is a dab hand at cleaning up. “He loves everything to be immaculate,” says Catherine. I don’t think she’s exaggerating.

Home Farm Cooking, by John and Catherine Pawson, is published by Phaidon on 15 April at £35

How To Spend It
Wild cooking: from Tasmania with love 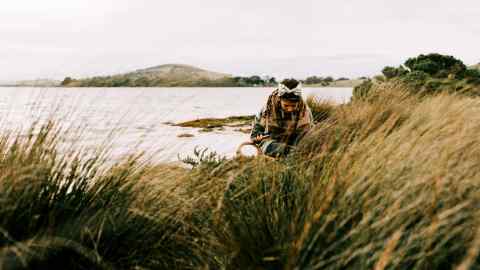