Humans have long suspected that music is a kind of medicine. Plato and Aristotle believed song could purify the soul and promote mental health, and the ancient Egyptians treated their sick with chanting rituals. Today, neuroscience is starting to reveal the mechanisms by which music triggers healing in the brain; already it has been shown to help a range of issues from chronic pain, autism and depression to Alzheimer’s and Parkinson’s. Studies are also demonstrating how we might all use sound to diminish anxiety, soothe and uplift the mind — and that it could perhaps even lead to personal transformation.

“La Monte Young and Terry Riley would stage all-night concerts in New York loft apartments where people would lie down and listen to the music,” says pianist Christina McMaster, who has tried to recreate these happenings at King’s College London. She has collaborated with the university’s mental health specialist Professor John Strang on the Sound Mind project, a series of “lying-down” concerts based on the mind-altering style of music created by the Hypnotic School of 1960s New York who used an innovative looping and repetitive pattern of notes to induce a kind of trance in the minds of listeners (prefiguring the genre of trance music). McMaster describes the repetitive phrasing as “like mantras, that bring people into a deep listening state in which they are fully present”.

Neuroscientist Daniel Levitin, author of This Is Your Brain On Music, likens the Hypnotic School’s sound to the drumbeats in shamanic ritual, which “cause the brain to give in to the rhythm, turn off its inner chatter, and create an altered state of consciousness”.

Neuroscientist Dr Daniel Glaser, of the Royal Institution, agrees. “Minimalist music is interesting, because you might think you are just listening to something pleasant, but over time the repetitions induce a hypnotic state, rich in the alpha brain waves that you associate with meditation.”

There was a profound intensity in the way people listened, which was deeper than when I play classical concerts”

McMaster had long been interested in the Hypnotic School, but it was a chance encounter with Strang that led to their concert collaboration. In their ‘Lie Down and Listen’ sessions, the audience were invited to drop to the floor and absorb the minimalist music. “There was a profound intensity in the way people listened, which was deeper than when I play more formal, classical concerts,” she tells me. King’s co-collaborator Dr Sally Marlow worked to collect data and comment on listener experience. Those coming out described how the music “flowed through” them, affording a sense of awe, freedom and enhanced energy.

McMaster, who has also collaborated with filmmakers, folk singers such as Peggy Seeger, and fashion labels like Louis Vuitton, has since begun to offer one-to-one and group sessions (from £895). Swathed in blankets at her Cotswolds studio I lie back and she plays. She improvises, moving between pieces by Glass and Cage and the piano notes hang in the air, resonating, weaving between slow and more fast and intense. The sound is mesmerising; the 90-minute session vanishes. I don’t know if I leave transformed, but I’m certainly moved and utterly blissed out.

While McMaster uses classical and contemporary piano in her sessions, sound healing is more often associated with gongs and singing bowls — the Duchess of Sussex and Kendall Jenner are fans of these techniques. Jasmin Harsono’s group sound meditation sessions (which she offers at central London locations including Jasmina Vico, from £30, and 180 Health Club) combine bowls, song and reiki and are profound and moving. She also offers online private sessions (from £75 for 30 minutes) and works with breast cancer patients in the King’s Cross-based Future Dreams House.

Levitin has attended the US crystal bowl sessions run by singer Jeralyn Glass. “The sound is inspirational. I leave feeling healed,” he says. But, along with other neuroscientists I speak to, Levitin contests the theory that healing vibrations are actually sent out from the bowls via certain specific sound frequencies. “There’s no evidence for that.” Rather, he points to the beauty of the experience stimulating an emotional lift. “Music activates almost every region of the brain: lyric centres; memory structures,” he says. “It can light up those parts of the brain that are engaged during spiritual experiences. It can open up your heart to different ways of feeling and believing.”

From 2011 to 2018, neuroscientist Mendel Kaelen was part of a team researching psychedelic therapy at Imperial College, when he started to investigate the idea that music could take people on psychedelic, transformative journeys. “There is evidence that music can bring us peak experiences, defined as moments which take you beyond yourself,” he says. In 2016 Kaelen founded Wavepaths. “We want to create immersive sound journeys which enable us to explore the depths of our minds, to resolve inner conflicts and move towards calm,” he says.

In January, the company launched an online platform drawing on a library of orchestral and electronic tracks laid down by artists including Jon Hopkins. Each listening experience is distinct, generated by a system using data including inputs on a listener’s mood and preferences. It held an immersive experience in a soundproof studio on Brick Lane, where biometric data such as breath rate also fed the system. “We are going to do much more of this personalisation,” Kaelen continues. “Soon the music will respond to you just as much as you respond to the music.”

The Brick Lane sessions had a waiting list of thousands: more than 86 per cent of people reported experiences that were meaningful. “We did extensive research [using surveys and EEGs] and found that people were having really profound experiences, which correlated to an improvement in wellbeing,” says Kaelen.

Can music really do this? I ask professor Elizabeth Margulis, director of the Music Cognition Lab at Princeton for her take. “Absolutely,” she says. “There is much work around people experiencing a kind of transportation, leaving their ordinary corporeal existence and becoming one with the music — and reporting a sense of having been changed by this experience.” 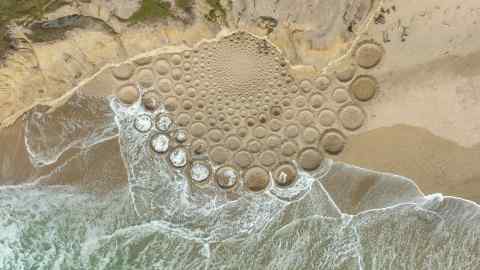 It’s perhaps an obvious pairing: replacing the muzak of yore with scientifically designed sounds to enhance — not irritate — your wellbeing experience. German beauty entrepreneur Dr Barbara Sturm has commissioned a soundtrack for her spas designed to bring down stress, and hence inflammation — with a forthcoming playlist to be used at home while you apply her products. Brian d’Souza, a DJ who has studied music psychology, has created a new experience for the Spa at hotel Coworth Park: working with the Scottish seaweed skincare brand Ishga, he recorded the sounds of the Hebrides where their seaweed grows with slow, resonant pulsing beats. “The idea is to use the music to transport people into nature, and envelop them in the experience; also to lower the heart rate, and to activate the parasympathetic [‘rest and digest’] state in the nervous system, to encourage a sensation of deep calm.”

“We can readily agree that some kinds of music can soothe or activate the parasympathetic mode,” says Levitin. But, he continues, there is still much to learn. “The science is in its infancy.” That said, the use of artistic media is now being promoted by the World Health Organisation’s Arts and Health programme, and by Aspen Institute’s NeuroArts Blueprint in collaboration with John Hopkins School of Medicine. And the US National Institute of Health has awarded the Sound Health initiative, its collaboration with the Kennedy Center, $20mn to uncover how music may best be deployed to treat conditions resulting from neurological disorders.

For now, we can be sure that music has the power to heal, says Levitin. “There’s no question about that.” And, of all the health trends, there are surely worse than lying down and losing yourself in ’60s minimalism. Or indeed letting your nervous system be soothed with biophilic Scottish sounds — that even come with a massage.