I once read an amusing story about how potatoes became popular in France. In the late 18th century, as much of Europe was suffering from famine, a pharmacist named Antoine-Augustin Parmentier realised that potatoes, which had been ill-favoured, could actually be the solution to the famine. He persuaded King Louis XVI to let him plant a large potato field in Paris, and stationed flashy guards to protect the spuds. Parisians became intrigued and suddenly it became chic to grow potatoes. Parmentier persuaded Marie Antoinette to wear potato flowers in her hair, and the king to wear them in his buttonhole. With that, potatoes became fashionable in France.

I love the idea of placing emphasis and importance on a humble ingredient. There is something special about taking a simple ingredient and treating it with the same care and consideration as you would an expensive one. With my work, I am most interested in taking common ingredients like butter, bread or a radish, for example, and treating them with the same care as I would something very precious. I’ve made sculptures out of butter, furniture out of bread and displayed radishes in jewellery cases as if they were rubies. A properly prepared potato can feel more luxurious than many lavish ingredients. Also, in New York, the farmers’ market where I shop is still scarce in terms of offerings. So I thought there is no better time than now to throw a potato party.

Potatoes and eggs are a perfect pair. When buying one, I almost always reach for the other. With that in mind, I decided to host a Sunday-afternoon lunch that features Spanish tortilla. The rest of the menu came together around the tortilla. A perfect tortilla is custardy and wet on the inside, with a barely cooked, blond skin that holds it together. Its texture is rich and toothsome, a little bit like mashed potatoes. Putting two similar yet different textures on a plate makes for an intriguing bite. So I decided I would pipe mashed potatoes around the tortilla and then add a generous heaping of caviar on each slice. I also prepared some aioli to serve alongside potato chips.

I love a high/low moment, and nothing screams high/low louder than potatoes, onions, eggs and the finest caviar. I source caviar from the much-loved New York City institution Russ & Daughters. Its Siberian sturgeon is a favourite. The beads are a dark, glistening jet black and taste like salty ocean water left on your lips after a long swim. I also love how the tin looks on the table.

For decor, I ran to the flower market only to realise most of the shops close on Sunday. So instead I decorated the table with two large blue and white tins of Bonilla a la Vista potato crisps. The table also included fougasse bread, trout and salmon roe, salami and a speckled radicchio salad, all of which doubled as both food and decor. I like using ordinary objects to decorate the table. In place of a candle holder, I carved a small hole in a potato and placed a silver candle inside. I also cut a bit of ivy from a plant I have at home and made the tortilla a crown, and hollowed eggs inside which I placed a bit of caviar and roe. No flowers, no problem. 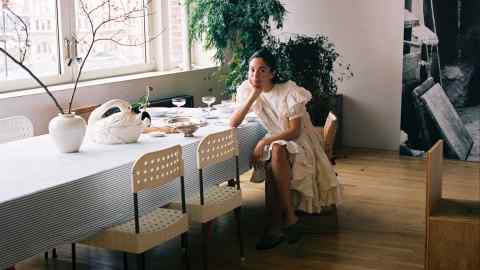 Guests started piling into the kitchen as I was piping the mashed potato. Don’t be afraid to ask your guests for a hand when you need it. Give them a glass of wine and put them to work. We happily drank several bottles of Austrian wine from producer Andreas Tscheppe. The wines, from the Styria region, are produced naturally but don’t have that yeasty smell sometimes associated with natural wine. We enjoyed the Sauvignon Blanc and Chardonnay. They were both crisp, mineral and bright, and especially delicious with the salty caviar and sweet earthiness of the onion in the tortilla.

For dessert, a bit of humour was in order. I made hazelnut chocolate truffles that were draped in marzipan and dusted in cocoa to give them the appearance of potatoes. The children loved shaping them. While no one wore potato flowers in their hair, the humble potato was once again given the royal treatment.