Bond ETFs might have short changed market makers during 2020 panic

Bond ETFs may have prevented runs on their funds during last year’s market panic by short-changing the market makers and investment banks that service them, according to the Bank for International Settlements.

Exchange traded funds are designed to closely track the value of their underlying holdings. Yet during the Covid-driven market sell-off in March-April 2020, much of the $1.2tn fixed income ETF universe plunged to unprecedented discounts to net asset value (NAV).

Vanguard’s $55bn Total Bond Market ETF (BND) closed at a 6.2 per cent discount to NAV on March 12, while BlackRock’s $71bn iShares Core US Aggregate Bond ETF (AGG) ended at a 4.4 per cent discount on the same day. An array of other junk bond, municipal debt, bank loan and even US government bond ETFs also traded at extraordinary discounts to NAV.

“This is not supposed to happen. This disconnect shows that something has gone awry,” Duncan Lamont, head of research and analytics at Schroders, told the FT at the time.

Discounts and premiums to NAV are supposed to be eliminated by “authorised participants”, the market makers and banks that control the supply of ETF shares in the market.

If an ETF is trading at a discount, APs have an incentive to buy the undervalued ETF shares in the secondary market and redeem them with the ETF manager, receiving the higher priced underlying holdings in return in a redemption basket. These holdings can then be sold for a profit.

This process helps erase the discount by decreasing the supply of the ETF’s shares on the secondary market (thereby raising their price) and increasing supply of the underlying securities (lowering their price). The system works in reverse if an ETF is trading at a premium to NAV, with APs buying the underlying holdings and swapping them with the sponsor for newly created ETF shares.

Yet this arbitrage mechanism evidently broke down for fixed income ETFs during that period in 2020.

A paper from the Basel-based BIS suggests this was due to ETF sponsors deliberately handing APs lower quality bonds in order to discourage them from redeeming shares in the ETFs.

ETF HubLatest news on ETFs
How do ETFs work? 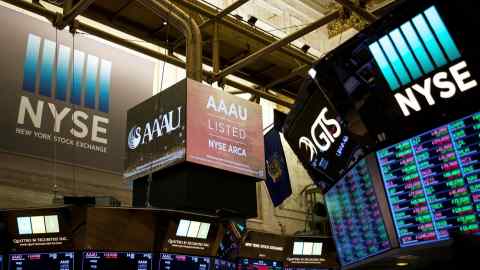 Unlike for equity ETFs, where the creation and redemption baskets ETF sponsors trade with APs are essentially identical to the underlying holdings of the fund, bond baskets vary wildly from the intrinsic portfolio.

According to the BIS, these creation and redemption baskets can hold just 3 per cent of bonds in the ETF, in part because the relatively high minimum trading size of bonds means it is impractical to hand an AP a tiny sliver of potentially hundreds or even thousands of bonds.

If ETF sponsors want to discourage redemptions during market runs they can potentially stuff the redemption baskets with lower-quality bonds, such as those that are high risk or illiquid.

Not only would this discourage redemptions by APs, it could also soothe the jitters of end investors in the ETF, potentially dissuading them from selling.

“The lower-quality bonds that APs obtain after redeeming ETF shares would reassure non-running investors that their shares are now backed with holdings of higher average quality. This would discourage further runs and lead to ETF discounts during run episodes,” said Karamfil Todorov, an economist at the BIS and author of the paper.

Todorov believes this is exactly what did happen last year. “Such a stabilisation mechanism was arguably in place during the March-April 2020 episode when some ETFs traded at a discount while redeeming baskets that were more illiquid than the holdings,” he added.

The analysis undermines a widely held view that only the US Federal Reserve’s extraordinary stimulus package — which included buying bond ETFs en masse — prevented disastrous runs for fixed income ETFs, which would have been forced to sell illiquid bonds at short notice, potentially for fire sale prices.

“The decoupling of baskets from holdings can be a shock absorber during volatile times,” Todorov said. “The partial convertibility that stems from the decoupling means that ETFs could be a stabilising force during runs and prevent fire sales.

“This mechanism is possible because of the predominantly in-kind nature of ETF redemptions, whereby shares are exchanged for securities. It is not available to other investment vehicles with cash redemptions such as mutual funds.”

However, Todorov warned there was a downside to ETF sponsors palming off poor quality credits to hapless APs.

“Such a strategy can backfire in the long run as it can hurt ETFs’ reputation. If investors perceive an ETF as redeeming only low-quality bonds in stress times, they may withdraw from the ETF altogether,” he said.

Peter Chatwell, head of multi-asset strategy at Mizuho, saw the practice as “a good circuit breaker” during times of stress. Nonetheless, he too argued there was a potential downside.

“It will be a negative for the ETF,” Chatwell said. “It will increase its tracking error versus the underlying securities . . . It’s not a desirable outcome.”

However, John Hollyer, global head of fixed income at Vanguard, disputed the paper’s findings, saying that “the presence of bond ETF discounts during this period was primarily a reflection of the higher costs and uncertainty in bond markets and was not a barrier to the arbitrage mechanism that underlies creation and redemption”.

Another large bond ETF manager, which requested anonymity, said it “provided in-kind redemptions as per the usual creation/redemption process which offered assets with a similar profile to the relevant ETF. We did not offer baskets of low quality, illiquid bonds as it would have incurred tracking error”.

A senior figure at a major market maker, who also asked not to be named, said that while the BIS analysis was “a reasonable theory and the logical steps they take make sense,” it “doesn’t match with our experience”.

He said his company continued redeeming fixed income ETFs throughout the March-April crisis, and that it was always offered representative baskets of securities that did not disadvantage either investors who remained with the fund or those that chose to redeem.

He said the reason why selling activity did not rapidly close funds’ discount to NAV, was because lack of liquidity in some of the underlying bonds meant their market prices became stale and unreliable.

“I think the conclusion is wrong. There is a relationship aspect here. If we were being treated in a way that was unfair our reaction to that would be that we have to make much wider markets. Investors would pay a bigger spread to get in and out,” he added.