This year has tested law firms’ ability to respond to crises with a global pandemic that has sent the world into lockdown, prompting an economic downturn and reinforcing boundaries between nations, writes Mary Ormerod.

The six law firm leaders profiled here have approached their employees and clients not just as professionals dealing with unpredictable events, but also as human beings with families. This has helped their firms to build deeper client relationships and accelerate transformation of their businesses.

Even before the pandemic took over, these innovative leaders from law firms across the Asia Pacific region had shown strategic vision and the courage to make bold strokes.

All of the leaders highlighted here are plotting a future in which their firms will use technology to the full to work flexibly with clients and achieve value that extends beyond legal services. In addition, they are implementing structural changes to make diversity and inclusion integral to their firms.

These leaders could never have predicted the events of 2020, neither the global lockdown, nor the protests against social inequality that have increased scrutiny of every organisation’s diversity record. But those events may prove to accelerate these firms in the direction these leaders were already taking them.

Justin D’Agostino became chief executive officer of the firm this year, after years of leading the group’s Asia practice. His success in expanding the firm’s reach in Asia indicates why he was chosen for the executive role. Career milestones include the post of managing partner for greater China in 2013 and then global head of disputes in 2014. He has since overseen the opening of offices in South Korea and Malaysia and built a regional arbitration practice.

Mr D’Agostino has also developed the firm’s legal operations function to include legal project managers and a pricing manager.

He has pushed for greater diversity at Herbert Smith Freehills, helping to achieve its target of 30 per cent female partnership in Asia and founding its first LGBT+ network in 2007. Last year the firm launched a shared parental leave policy with leave allocations for primary and secondary carers, regardless of gender or sexuality.

Georgia Dawson established her firm’s innovation group in Asia and champions legal tech in its regional practice, emphasising the need to adapt technologies that are typically programmed in European languages. She also deals with internal and regulatory investigations, joint-venture disputes, banking litigation and international civil and criminal fraud proceedings.

She has championed diversity and inclusion and launched the Asia chapter of the firm’s LGBT+ ally network. She leads on the firm’s commitments to UN pledges on LGBT+ inclusion in the workplace and advises clients on diversity best practices.

Ms Dawson has overseen significant expansion of the firm in the region, which recorded 27 per cent revenue growth in 2019. Freshfields has been “empowered to accelerate technological improvements” by the pandemic, she says.

In 2019 Sandeep Kapoor left his job as head of legal in south-east Asia at Sequoia, the US venture capital firm, using his network of VC and start-up contacts to found law firm Algo Legal in India.

Mr Kapoor is on a mission to harness the efficiencies of technology to develop straightforward answers to complex legal problems, shaped partly by those he experienced as an in-house legal counsel. One example is a tool called SecDesk, which enables VC clients to monitor secretariat activities of portfolio companies. Such tools already account for 15 per cent of the firm’s revenues.

Algo Legal has implemented technological processes for all aspects of its service, such as automated contracting, deal management and document review. The firm’s integrated use of tech stood it in good stead when the pandemic struck: “We found ourselves moving into new areas of practice, such as our involvement in corporate advisory work to assist our clients.”

Annette Kimmitt joined MinterEllison as chief executive in 2018 from the professional services firm EY. Her background as a chartered accountant has enabled her to bring a fresh perspective to law firm leadership.

She oversaw a revamp of the Australia-based firm’s operations model, incorporating agile processes and project management, and the launch of an infrastructure consulting arm in 2019.

Ms Kimmitt also champions diversity of staff. In 2019 the firm committed itself to a target of 40 per cent male, 40 per cent female and 20 per cent any gender representation in the partnership by 2025. She is also the founder of Scale Investors, a seed investment organisation, which is focused on investing in female-owned and managed ventures.

The pandemic has highlighted the “client experience”, she says. Advisers that “anticipate how clients will change their habits will build stronger relationships that will endure beyond the crisis”.

Vicki Liu’s skill at anticipating clients’ needs led her to head the creation of a restructuring and recovery practice. The first of its kind in the region, it mixes experts in litigation, banking and mergers and acquisition.

Recognising an opportunity to offer Chinese law capability, she helped form an alliance between the firm’s Hong Kong office and a local Chinese law firm, which allows the firm to take on cross-border matters. Ms Liu launched the firm’s Peerpoint consultancy programme in Hong Kong, and facilitates employee discussions on improving the firm’s diversity and inclusion efforts in the region.

Against a backdrop of tensions between Hong Kong and China, Ms Liu says the firm is scenario planning for different laws being introduced in the US, China and Hong Kong. Commenting on the Covid-19 crisis, Ms Liu says: “We are all in this together, so not only was I having regular internal calls . . . I was having weekly calls with managing partners at other international law firms.”

After five years as a partner at Freshfields, Gavin MacLaren took over the leadership of Australia’s Corrs Chambers Westgarth in 2018.

Mr MacLaren spent some time seeking the insights of his staff and clients before carrying out fundamental changes. He restructured the remuneration model and removed practice group profit-and-loss accounts to encourage cross-practice collaboration. He also did away with daily targets for billable hours in favour of a bonus system.

Other changes have included giving all employees an extra five days’ leave a year and introducing a policy to allow those taking parental leave to continue to receive payments into their retirement fund and to be considered for promotion. Since Mr MacLaren became chief executive, the firm’s revenues have increased by 36 per cent, says Corrs. He says one “positive” of the lockdowns is greater acceptance of flexible working: “Much greater levels of flexibility will continue well past the crisis.” 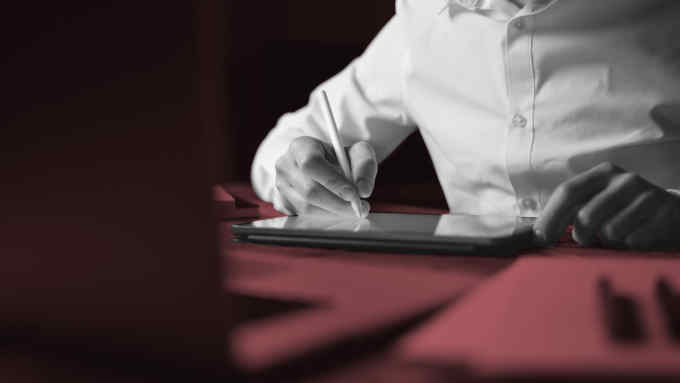 Lawyers’ innovative skills have been put to the test as never before following the spread of Covid-19 across Asia-Pacific and globally. We look at key areas of legal innovation — from strategy and clients to wellbeing — in light of the pandemic