Dhananjayan Sriskandarajah on appetite for reform after the sexual misconduct scandal

We’ll send you a myFT Daily Digest email rounding up the latest Charity news every morning.

The future of Oxfam, one of the UK’s most venerable philanthropic institutions, remains in the balance following the revelations last year of sexual misconduct by its aid workers in the aftermath of the 2010 earthquake in Haiti.

Salacious details of Oxfam aid workers using prostitutes in Haiti were made worse when it emerged that the charity had been aware of the misconduct by 2011 but failed to acknowledge it publicly, allowing the country director responsible, Roland van Hauwermeiren, to resign and go on to work for other charities.

Rebuilding the organisation’s reputation and restoring public trust in its work as it awaits the findings of an independent investigation by the Charity Commission is the challenge facing Dhananjayan Sriskandarajah, Oxfam’s new chief executive, who described the Haiti scandal as a “wake-up call”.

“The Oxfam of tomorrow is going to be unrecognisable,” vowed Mr Sriskandarajah, who took over in January.

“People are so busy saving lives or responding to emergencies, that I think they ended up not paying sufficient attention to the behaviours or cultures that were driving some of this,” he said. “We can’t be doing good around the world while colleagues are causing harm along the way.”

Coming in the wake of the #MeToo movement, the Haiti revelations caused outrage among Oxfam’s donors and the general public. Mr Sriskandarajah’s predecessor, Mark Goldring, further fuelled criticism when he told the Guardian newspaper that the reaction had been “out of proportion”.

This was followed by allegations of sexual harassment at Save the Children, sending a shockwave through the entire voluntary sector. Parliament’s international development select committee described the aid sector’s response to sexual offences by charity workers as “complacency verging on complicity”. Donations slumped.

Mr Sriskandarajah, a former civil society activist, was appointed because he would “ask the difficult questions and work well with colleagues across the Oxfam confederation to come up with the answers”, according to Caroline Thomson, Oxfam’s chair, who described him as a “brilliant strategic thinker with a record of delivery”.

He previously worked at Civicus, a Johannesburg-based global alliance of civil society organisations that works to strengthen citizen action. Before that he was director-general of the Royal Commonwealth Society and has been deputy director of the left-leaning think-tank the Institute for Public Policy Research. He is also a trustee of Comic Relief.

Oxfam is currently the subject of two investigations — an internal one into sexual misconduct, accountability and culture change, as well as the one by the Charity Commission. Until the latter reports, the charity will not bid for UK government contracts.

The impact on the organisation’s funding could be severe. Institutional donors provided £209m of Oxfam GB’s £427m income in the 2017-18 financial year; around £22m came from the UK government. When its last annual report was published late last year, Oxfam said it was unable to quantify the impact of the scandal on individuals’ donations but 7,000 supporters stopped giving in the immediate aftermath, and Mr Sriskandarajah says £14m of income has been lost.

The charity has shed 120 jobs — from a UK workforce of 1,150 — in response to the drop in funding, but now believes donations have stabilised, albeit at a lower level than before. Mr Sriskandarajah himself will earn £10,000 a year less than Mr Goldring, at £120,000.

Mr Sriskandarajah believes important steps have already been taken to address the failures of leadership and culture that led to the wrongdoing in Haiti.

“The care and approach being taken to how we deal with safeguarding will be a step change,” he said. “Just in the last year every single member of staff has gone through training on safeguarding.”

The charity is following a 10-point action plan, which includes strengthening internal processes, and strengthening its “focus on gender justice externally”. Mr Sriskandarajah believes there is a genuine appetite for reform within the organisation.

“People are working tirelessly to try to get things right, because it goes to the heart of our mission . . . Every colleague I’ve spoken to internally sees the need for change, not just in terms of the internal culture, but also about how we do programmes, how we deploy globally.”

He pointed out that Oxfam was implementing organisational change before the scandal broke, with a new international model under which Oxfam affiliates work together under a single management structure in each country, rather than having a number of different country directors.

Life & Arts
Oxfam and the dark side of the aid industry 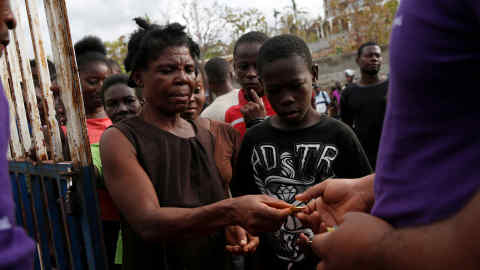 But critics say changes are needed across the entire sector. In July British MPs argued that aid charities should be subject to a new ombudsman to end years of “abject failure” in tackling sexual abuse.

Mr Sriskandarajah said he believes a global system for vetting aid workers, which is currently being trialled, is necessary, despite fears that such a register would be overly bureaucratic.

“We have to get much more serious. If ever there was a platform and a moment to reimagine, repurpose, this is it,” he said.

He added that the sector must better manage the endemic power imbalance between aid donors and recipients, which was undoubtedly a factor in Haiti.

In 2017 he wrote a blog asking whether the charity sector was at “the beginning of the end”, and argued that the “corporatisation” of big charities had set business “free to pursue private good almost at all costs”.

He now says that no charity “has the right to exist indefinitely”, but believes the world needs a “strong, independent, vocal” civil society more than ever, and that Oxfam’s record of providing humanitarian relief whilst also challenging policy justifies its future.

He is aware of the difficult task ahead and admits that he had to “think twice” before deciding to join Oxfam, but a friend’s comment swayed his decision.

“He said something that haunted me for the next few days . . . [that] real leaders run into the fire and not away from the fire.”