The first time I order espetada – a Portuguese dish that originated in Madeira and consists of skewers of grilled meat – the beef arrives in a pot, already de-skewered. This is at a restaurant in Funchal, the Madeiran capital. The meat tastes lovely but I feel cheated of the inherent drama of the dish. Skewered meat without the skewer? Where’s the fun in that? The second time, I head to a traditional eating house in the northern hills called Casa de Pasto Justiniano. Here, espetada is cooked and served the old-fashioned way. First, the meat is grilled on bay laurel skewers in a hearth in the corner of the room. Then the skewer is brought to the table and hung from a chain dangling from the rafters. The skewer swings like a pendulum over the table. Chunks of beef with bulging knots of fat drip juice onto a plate. It’s delicious, and as dramatic as a set-piece out of Game of Thrones.

A popular winter destination with year-round sun, Madeira has a lot to offer for food. On my trip I revelled in slightly schmaltzy spots like Casa Velha, where you can dine in a lushly trellised garden on dishes like steak Diane and crème brûlée. There wasn’t a violinist to serenade, but a romantic mood prevailed. Down the road, Casal da Penha welcomes tourists and locals, and thrums with the energy of a firm favourite doing brisk trade. The portions are huge. The giant king prawns are indeed giant. And the mussels “a bulhao pato” (cooked with white wine, lemon juice, olive oil, garlic) are the size of small avocados.

An essential spot for baked treats is the gingerbread-scented store Fábrica Santo António. I was so seduced that I left with armfuls of spiced cookies, Madeira cake and two of its dainty tins (as if I didn’t have enough to last a lifetime). Top of any visitor’s list, though, must be afternoon tea at Belmond’s Reid Palace, the more than century-old hotel in Funchal where Winston Churchill stayed. You lounge on wicker chairs overlooking the bay. The view may not be what it used to be, thanks to rows of hotels that look like cruise ships and actual cruise ships too. But you hardly care as you sip tea and champagne and sup on as many sandwiches, scones and cakes as you like. I left over-caffeinated and excessively sugared, but it was worth it.

A golden ball unstacks to reveal a trio of courses

Reid Palace is also home to an impressive Italian restaurant, Villa Cipriani, and one-Michelin-starred dining room, William. But for gourmet dining, I preferred Il Gallo d’Oro at the Cliff Bay hotel, which offers two-Michelin-starred cuisine with plenty of gimmicks. And fun ones. A golden ball (a nod to Madeiran footballer Cristiano Ronaldo) unstacks to reveal a trio of successive courses (foie gras, island trout, dashi). The breads come in what looks like a cantilevered sewing box. And the petits-fours are dispensed from a tabletop merry-go-round, like a flea circus with chocolates. 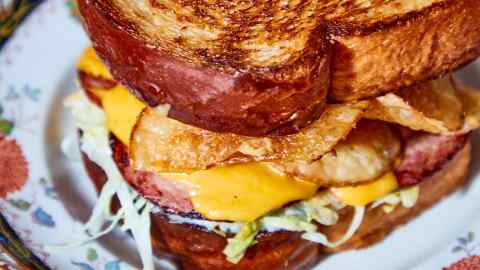 Other venues show off the island. Fajã dos Padres is an organic farm and beachside restaurant accessible via cable car from the top of a 300m-high cliff on the south side of the island. You arrive by walking through banana groves. On a local’s recommendation, I ordered tuna steak and cheesecake with pitanga (Surinam cherry) coulis. But really, you’re here for the setting. For sunset drinks, I suggest Maktub Pub, where crashing waves and curving skies bring to mind a surfer’s shack at the ends of the earth.

The buzziest place I visited, however, was back in Funchal. Kampo is one of three venues run by chef Julio Pereira (the others are Akua, which specialises in fish, and the bakery Kôdea). The focus at Kampo is meat. You can marvel at dry-aged T-bones in temperature-controlled vitrines on your way in. Best to sit at the counter to watch Pereira and his team at work. Cutting up steaks and finishing dishes that include short ribs with creamy potato, he told me his story. His father was a butcher on the west coast of Portugal. Having worked at restaurants in Spain, Italy and Brazil, he came to Madeira in 2013 because his wife is Madeiran and they’d just had a daughter. He was looking for a better quality of life. Tucking into his gorgeous starter of sardines, aubergine and passion fruit, followed by matured beef loin and chips, then white chocolate, black olive and passion fruit, I knew exactly what he meant.