India’s “green revolution” in the 1960s was hailed globally for combining policy and scientific advances in agriculture — bringing food security to the newly independent country. A surge in yields and production of staple crops, such as rice and wheat, helped prevent the famines that had blighted the country under British colonial rule.

But the intensification of Indian farming in the decades since has spawned a series of challenges of its own, from chemical pollution to price distortion. One of the greatest of all is unsustainable water use.

India, with a population of 1.4bn, is among the most water-stressed countries in the world. A report from the government’s NITI Aayog think-tank in 2019 estimated that 600mn Indians faced “high to extreme water stress”, and warned that 21 big cities — including the capital New Delhi — would run out of groundwater in a matter of years.

With about half the workforce employed in agriculture, this poses a huge challenge, not just to farmers but also to the economy as a whole.

Indian authorities are aware of the challenge. Prime minister Narendra Modi has repeatedly called on citizens “to save every drop of water” that they can. “We should use water sparingly, like a sacred offering,” he said in an address released on World Water Day in March this year.

However, the magnitude of the task has stumped policymakers, economists and environmentalists alike. India’s farmers, despite their vulnerability to water stress, often depend on a series of incentives and subsidies that encourage them to grow water-intensive crops, like rice. For example, many receive free electricity that allows them to pump water from the ground, which depletes groundwater levels.

These farmers also depend on the annual monsoon — the rainy season that sweeps across the subcontinent between June and September. Yet climate change has made these rains more volatile, triggering unpredictable combinations of intense flooding and droughts. Historic flooding in Pakistan this year, for example, devastated crops in the south of the country, while farmers in already dry regions face intensifying water stress.

“India is short of water and has a highly water insecure future,” says Karan Manral, a farmer and writer on agriculture. “What we’re seeing already is a form of climate chaos. What are the monsoon or water patterns going to be? I’m not sure I’ve read anything that has a clue about how the climate lottery is going to work out for any place.”

Amid this backdrop, authorities, non-governmental organisations and the private sector are all scrambling for solutions.

At one end of the spectrum, venture capitalists and investors have poured money into start-ups that promote technological solutions, such as hydroponics — a highly water-efficient method of growing plants without soil. But many dismiss such approaches as too expensive for mass use.

“It may be great in a very urban place, in New York City, where land is so expensive,” Manral says. “But, if you say it’s going to save the future of farming, you completely lose me there . . . The cost is many light years away from what a farmer in India is capable of doing.”

Other approaches include incentivising farmers to plant less water-intensive crops, such as millet — a cereal traditionally grown in India — rather than rice. In 2020, for example, the government in the northwestern agricultural state of Haryana launched a scheme offering farmers Rs7,000 ($85) for every acre on which they grow something other than rice.

These initiatives have had limited success, though. Avinash Kishore, a researcher at the International Food Policy Research Institute in New Delhi, argues that the vast differences in potential yield mean it is often more lucrative to grow rice than alternatives — even with the extra money.

Rice growers also enjoy government-mandated minimum prices that remove much of their financial risk, which is not the case with many alternative crops. Defenders of such arrangements point out that encouraging production of staples like rice and wheat protects food security by creating strategic surpluses to distribute at times of need, such as during the Covid-19 lockdowns.

These challenges suggest that initiatives to improve water use in farming must be part of a broader reform of the agricultural system. But the political peril in implementing this has left authorities reluctant to try.

Modi, for example, attempted in 2020 to overhaul the country’s farm laws and open up a government-controlled system to greater private participation. However, this controversial move — pushed through with minimal consultation — sparked such broad and unrelenting protests that he was ultimately forced into a humiliating U-turn, scrapping the reforms.

Kishore says that the government “seems to have given up” on trying to reorganise the system of subsidies that ultimately push farmers to grow water-intensive crops.

But he believes that at least one project has had some success in achieving the scale that could break the deadlock. PM Kusum, a government initiative launched in 2019, distributes solar panels to farmers to promote clean energy.

Instead of encouraging farmers to pump even more groundwater, authorities buy back excess power as part of the scheme, creating a financial incentive for farmers to limit their own electricity — and therefore water — use.

“This may be the largest government programme to save water,” Kishore says. 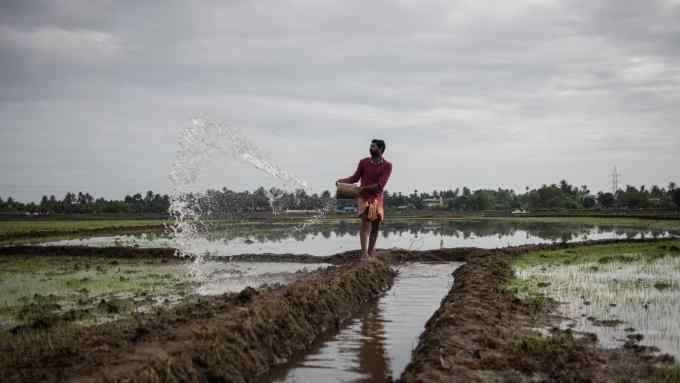