The top watch and clock trends for 2022

From the Rolex “Sprite” to Van Cleef & Arpels’ awesome automata, here are the highlights from Watches & Wonders

Returning to the fair for the first time since 2019, Van Cleef & Arpels put the wonder into Watches & Wonders with a trio of automata clocks fashioned from precious metals, gems, and ornamental stones, dazzling with their breathtaking combination of mechanical exigence and aesthetic refinement. There was a planetarium that, as well as replicating the movements of the celestial bodies in real time, could cause them to “dance” to music. The Rêveries de Berylline automaton featured a flower with petals that opened, permitting a hummingbird made from white-gold, mauve and blue sapphires, emeralds and tsavorite garnets to take flight. The pièce de résistance was the Fontaine aux Oiseaux depicting two gold and gem-set birds of paradise singing and walking around the edge of a basin of rippling water formed from chalcedony and rock crystal. Even the clatter of their claws and the movements of their feathers have been reproduced mechanically.

Van Cleef & Arpels was not the only house focusing on clocks. Jaeger LeCoultre is almost as well-known for its Atmos as it is for its Art Deco Reverso wristwatch. It relies on minute changes in temperature to cause an accordion-shaped container of ethelyne chloride gas to expand and contract, providing the energy to wind the movement. It is a timepiece with a past as storied as any famous wristwatch and has attracted the attention of Marc Newson, who designed what is to my mind the most pleasing version. This year sees two new iterations: a pared-down minimalist called the Infinite, and the Tellurium, which presents a panoply of astronomical and celestial information that you really need to be Brian Cox to make the most use of.

Patek Philippe resisted the easy win that would have been the launch of a new Nautilus and instead decided to highlight a generation of classic timepieces aimed at the younger collector in search of vintage-inspired design. One of the stars of 2022 is the drop-dead-gorgeous hand-wound chronograph Ref 5172G with salmon dial and white-gold case.

Over at Rolex, the left-handed GMT Master II (from £8,800) – inevitably given the soft-drink-inspired nickname the “Sprite”, thanks to its green and black bezel – may have been the star turn, but I was more impressed by the quiet recasting of the Air-King as a member of Rolex’s Professional family. This is a pitch-perfect example of the use of apparently small details adding up to a big change at which Rolex excels: the straight, as opposed to rounded-profile, caseband; the inclusion of the Oysterlock clasp; the addition of crown guards; a slighter bigger dial; a whisker over a millimetre on the bracelet width; optimised Chromalight display; the use of the Calibre 3230 and the addition of a zero before the number five on the minute display adding the balance that no one knew was missing at the top of the dial. The height of the watch has been reduced from 13.1mm to 11.59mm, because the use of magnetic components in the movement has obviated the need for a Faraday cage of soft iron. By no means the most costly watch on show at Watches & Wonders, at £5,900, it was one of the most impressive nonetheless.

For the past 10 years I have been imploring/boring every Vacheron Constantin executive that I have met to relaunch the 222, Vacheron’s late-1970s integrated case and bracelet design, and at last it has come out as part of its Historiques collection. I was also impressed by the ultra-contemporary skeletonised rendering of the Overseas tourbillon in titanium (£137,000) with a dazzling blue, PVD-treated, angled-minute track – probably the best Overseas that has yet been made.

Shaped cases at Hublot now account for 18 per cent of production; and having gone in a vaguely Richard Mille direction with its tonneau-shaped case watches, the Fusion brand is launching a square-cased timepiece – the Square Bang Unico – that bears a more than passing resemblance to a chunky Cartier Santos (although, as CEO Ricardo Guadalupe pointed out to me, a square is after all a square).

TAG Heuer presented half a dozen novelties that seemed more weighted towards the TAG (Techniques d’Avant Garde) part of its name, rather than the heritage-oriented Heuer. Of particular interest was a sleek, black, solar-powered Aquaracer Professional 200 Solargraph, which boasts a natty bezel made from a blend of carbon and green super-luminova and a dial with super-luminova indexes. Pricing at £2,450 seems eminently reasonable, but if you fancy spending considerably more there is the Plasma (POA) which features a main dial of polycrystalline (lab-grown) diamonds that took 800 hours to cultivate. These diamonds grow at a rate of one micron per hour, which sounds slow until you remember it takes a couple of billion years to make the real thing.

Chanel chose to showcase the serious horological content of its flagship J12 with the reveal of an in-house flying tourbillon. But it is the continuation of the J12s with Manga-style caricatures of Mademoiselle from various periods in her life that stick in the mind. There she is dressed for lunch at La Pausa, her house overlooking Cap-Martin, in striped T-shirt and wide-legged trousers; next we see her as the poised fashion queen, her neck garlanded with pearls.

HTSI
Omega and Swatch surprise the market with a £207 MoonSwatch 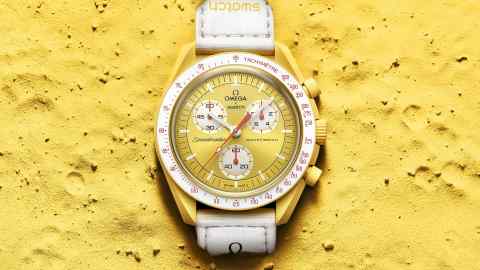 And finally Cartier continues on its winning roll with a timepiece for every taste: the multicoloured enamelled and diamond-set (and slightly trippy) Crash is a stand-out watch, but then so for completely different reasons is the Masse Mystérieuse – in which the skeletonised semi-circular calibre is also the oscillating weight. And it is not just movements that get the technical treatment: the Cartier Coussin is issued in a special edition with a flexible, almost spongy, case set with either diamonds or coloured stones – a brilliant (in both senses) achievement.