Evergrande bondholders say they have not received $148m interest payments

Evergrande bondholders said they had not received interest payments on three offshore bonds ahead of a deadline on Tuesday, as yields on risky Chinese corporate debt traded near decade highs on concerns that a growing number of developers faced default.

The world’s most indebted developer was due to make interest payments totalling $148m on dollar-denominated bonds by midday on Tuesday in Hong Kong, but bondholders had not received any funds, according to two people familiar with the matter. The bonds were last trading at 21-22 cents on the dollar.

The developer’s unfolding liquidity crisis has triggered a reckoning over the health of the wider Chinese property sector, as sales slow and Beijing presses developers to reduce debt, with many of Evergrande’s peers also approaching default.

Asia’s high-yield bond market, in which Chinese developers are among the largest issuers following decades of rapid urbanisation in the country, has been roiled by panicked trading in recent days that has pushed yields sharply higher.

Since Friday, yields on an ICE index tracking Chinese corporate issuers in the Asian dollar high-yield market have soared to 22 per cent, the highest since 2009, compared with just 13 per cent at the start of September and 10 per cent in June.

Sinic Holdings, a Chinese developer, said on Monday evening that a default on bonds coming due this month would “likely occur” because the company did not have enough “financial resources”. The bonds are trading at about 25 cents on the dollar.

Last week, luxury developer Fantasia, which was founded by a niece of former Chinese vice-president Zeng Qinghong, defaulted on a $206m bond.

Credit default swaps on five-year Chinese sovereign bonds have so far this week risen 8 basis points to 59bp, their highest level since April 2020, with analysts suggesting the move was linked to the property sell-off.

“The problems in the Chinese property sector are now impacting upon investors’ general view of systematic risk,” said Charles MacGregor, head of Asia at Lucror Analytics. He added that Chinese high-yield bonds were “under extreme pressure given a dearth of buyers”.

China Modern Land, another developer, said on Monday that it would attempt to extend the maturity of a $250m note by three months, while Sunac China Holdings has come under heavy scrutiny in recent weeks over a draft letter to a local government that warned of a “turning point” in the real estate industry. 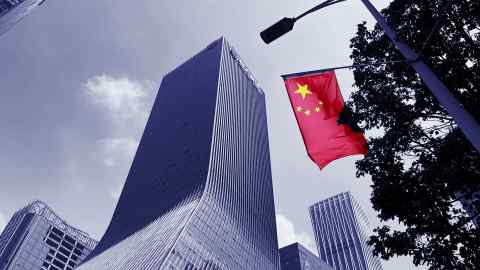 Sentiment towards Evergrande securities worsened considerably in July after a series of incidents that included the freezing of one of its deposits at a mainland bank and the halting of some project sales.

In late August, the developer, which has almost 800 projects in hundreds of Chinese cities and has been under government pressure to reduce its debts for a year, warned of the risk of default.

A sell-off in its bonds soon spread to other heavily leveraged developers, including Fantasia and Guangzhou R&F, whose bonds have fallen sharply in recent days.

Market volatility has risen over concerns about developers’ ability to refinance, combined with slowing sales of new homes and land across China’s property sector, which accounts for about a quarter of the country’s economy.

International bondholders in Evergrande have hired investment bank Moelis and law firm Kirkland & Ellis to advise them ahead of what is expected to be one of China’s biggest-ever debt restructuring processes.

The advisers told bondholders on Friday evening that they had received no “meaningful engagement” from the company and expected a default was “imminent”.

Trading in Evergrande shares is halted in Hong Kong, as are those of its property services unit, which noted a potential takeover offer last week.