Inside the Guggenheim of the jungle

Roth’s Mayan museum project so inspired curator Marcello Dantas that he became its artistic director. Together, they are conjuring magic in the trees

“We have built an entire city without cutting down a single tree,” says the Patagonian hotelier and self-taught architect Eduardo Roth, who is better known simply as Roth. Created over a period of nine months, without any architectural plans beyond the edict to work harmoniously with the natural surroundings, Azulik Uh May is a cultural centre 30 minutes’ drive north-west of Tulum that rises from Mexico’s Mayan jungle like a mycelium temple. At its centre sits the SFER IK Museion, a cavernous 52ft domed art space formed from bejuco vines, concrete and fibreglass. Inside, there are fire pits and fountains, abundant plant life and undulating pathways that circumnavigate the trees rising from the amorphous floor. It’s a museum, but not as we know it.

“There are no columns or conventional structures,” says Roth of his “City of Arts”. “Everything is sustained by magic.” Rather than bulldoze this verdant jungle terrain to make way for cement mixers, all the building materials were made on site, using age-old techniques, and everything was constructed by hand. “The only rules were that we couldn’t cut anything, and that we must respect the formation of the forest floor and the water,” he explains. The aim is to elevate jungle living by blurring the boundaries between outside and in. Built according to “biomorphic” principles, its design echoes the configurations of nature, including the helix shape of the vine. Roth’s on-site home contains 79 trees. He calls it “improvised architecture”, and the results are transformative and enchanting.

Before Azulik, Roth worked in publishing, running newspapers in Mexico City in the 1980s, then heading up an advertising firm in the 2000s. He lived in Tulum for more than 20 years, where he created the original Azulik Tulum eco-resort and SFER IK museum, before he relocated to the jungle three years ago. The experience ignited a deep fascination with Mayan culture – he calls it “the magic of the Mayans” – that informs the Azulik philosophy.

“It’s one of the oldest cultures in the world,” says Roth. “They hold knowledge that has yet to be understood by westerners. If we protect them and learn from them, then we have the chance to grow not just sustainably from an ecological point of view, but emotionally too, gaining happiness and sanity and wellbeing.”

When the Brazilian curator Marcello Dantas first made it to Uh May last January on the suggestion of a friend, it blew him away. “I stepped inside and thought, what the hell is going on?” he says. “I’ve been making museums for more than 30 years, but this place is breaking every one of the rules – and succeeding.” Dantas was so enamoured that he was compelled to write an article chronicling his experience on the flight home, and was immediately invited back. “He came for a week, but stayed for a month,” says Roth, who swiftly hired Dantas as the museum’s artistic director.

Roth has certainly found a kindred spirit, someone who shares his enthusiasm, creativity and insatiable appetite for ideas. “He is one of the most alive people I know,” he says of Dantas, who sees himself as an interpreter, placing Azulik’s ecological and cultural vision into context, and acting as a storyteller for SFER IK. The duo revel in the nonconformity of their collaboration, which feels more like a friendship than a professional partnership. There is no working process, only an effort to interrogate, expand and enact one another’s ideas – the bigger, and bolder, the better.

This all starts, of course, with the museum. “A gallery that doesn’t have a single flat wall or floor, that is not obeying any of the conventions, is a fertile ground for art,” says Dantas. The antithesis of a white cube, its architecture invites artists to move beyond the canvas and create immersive installation art that directly answers its unique demands. There is nowhere to even hang a painting here.

Even if we don’t realise it, the traditional museum experience is prescribed on a set of conventions: you pop on headphones, move along a predetermined path of the audio tour, then exit through the gift shop. For Roth and Dantas, this conveyor belt of culture is a westernised ideal, designed as far as possible to eliminate risk. “We live in a world of extreme control,” says Dantas. “But this is a space for intuition. You take off your shoes and do whatever you feel. There might be a bird in a tree; something might be wet or textural. It ignites a different level of curiosity.” SFER IK’s architecture poses a particular challenge for artists. “Most are struck by the appearance of the museum, but most don’t have an immediate answer to how their art can exist there,” says Dantas. “They have to develop it.” Herein lies the excitement. “If the artists can respond creatively we will find a new grammar and new forms,” he says. This, in many ways, is SFER IK’s reason for being. 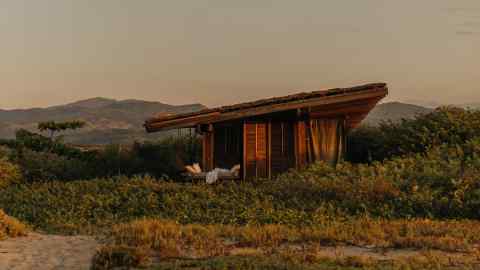 The museum relaunches next month, having been shut at the height of the Covid crisis, with the inaugural exhibition titled Maxx. Tokyo artist Makoto Azuma will fill SFER IK with his most monumental botanical sculpture yet. This towering 15m wooden structure, formed from a lattice-work of interconnected tree trunks and branches, will be decked with indigenous plants and flowers. Azuma is known for his ambitious creations that explore the fleeting beauty of nature in an effort to decode the hidden power of plants – suspending blooms in ice, sending them into the stratosphere and to the bed of the Pacific Ocean. At the close of the show, when his behemoth is dismantled, its blooms will be shared with the community. This ephemeral ecological statement sets a radical tone for a biannual programme of site-specific shows.

Alongside the museum are a series of working studios, including Roth’s architectural practice as well as art and craft ateliers spanning everything from macramé to metalwork. It’s an international melee of creativity: there are Italian architects, Brazilian bio-designers and local Mayan creatives working together in a way that marries the ancient and modern. Under the Azulik banner they make furniture and clothes, experimenting with the possibilities of fungus, seeking solutions to far-reaching environmental problems such as water protection. Roth’s ambitions don’t end in the Yucatán Peninsula. In northern Peru, he runs a volunteer-led regenerative farm that researches and records the Amazonia’s medicinal plants. He is also working on similar Azulik-style eco tourism and art projects in Panama, Puerto Rico and Saudi Arabia.

Dantas shares Roth’s view that, as the disappointments of the COP26 summit proved, rationalism will not provide an answer to the world’s increasingly urgent woes – but hope prevails. “When you’re in Uh May you’re sure life will survive,” says Dantas. “This is a place where the network of nature is so beautifully orchestrated – you get the sense that humans are irrelevant to the equation.” It’s a positive proposition: cede control, and the earth can heal.