Deep in the woods, a ski retreat that’s straight from a fairytale

Kitzbühel is Austria’s most glamorous resort but, hidden in the trees, an old hunting lodge offers a very different family ski trip

The opening credits of Kitz, a trashy Netflix drama from last year, leave viewers in little doubt about what to expect from Kitzbühel. This is “the Aspen of the Alps” — a place of clubs, drugs and billionaires behaving badly. Locals might object to that characterisation but this is unquestionably Austria’s starriest resort, with the country’s highest property prices and some of its best restaurants and hotels. Every January, stars (usually including Arnold Schwarzenegger) arrive to watch the Hahnenkamm races — the most challenging and celebrated on the world cup circuit — and to take part in a raucous week of festivities that features events like the “Kitz ’n’ Glamour Party” and the “Playboy After Race Party”.

As night fell on the edge of a forest to the south of the town, we were getting ready to experience a very different side to the resort. I lay on the snow, fumbling with freezing fingers and a torch in my mouth as I attempted to fit chains to our car’s tyres.

Ahead was a 3km snow-covered track, winding gently upwards, the last of the day’s skiers occasionally swishing down it. Somewhere at the end was our accommodation for the week: a wooden hut, hidden away in a deep valley, and without WiFi, phone signal or electricity.

When I booked it, from the comfort of a warm office, an escape from the crowds into the alpine wilderness had seemed a thrilling prospect. Now, with the children demanding dinner, the snowchain instructions only in German, thick flakes falling about my shoulders and my coat buried somewhere deep in a suitcase, it all seemed a little mad. Thankfully at that moment, Franz Pöll, the hut’s 74-year-old caretaker, pulled up, made short work of the chains and told us to follow him. So, only a few hours after leaving the long-stay car park at Stansted, we found ourselves suspending disbelief and driving up a ski run, headlights shining off the falling snow and deep drifts, steep wooded slopes to either side.

Finally, with only a few slips and slides, we made it to the cabin. The Josef Kreidl Hütte was built for hunters in 1958 and named in honour of a local lumberjack killed in an accident. Often rentals don’t quite live up to their online billing, with neighbouring houses and noisy roads artfully cropped from the images, but this was straight out of a fairytale. The entire building was made of spruce logs cut from the surrounding forest, the name carved above the door, a snow shovel hanging beside it. A wooden table, resting on whole sections of tree trunk, stood on the terrace sheltered by the roof’s wide eaves, from which hung long curtains of icicles.

Inside, gas lamps gave a warm glow, and a stone wood-burning stove in the centre of the room (lit earlier by Franz) was pumping out heat. A small shower room and toilet lay off to one end and upstairs was a big shared bedroom. Franz showed us where to find the kindling and log store, explained how to operate the gas stove and the small gas-powered fridge. Then he bid us goodnight and we were alone in our snowglobe fantasy, kids gleefully snowballing and icicle smashing, parents unloading a week’s supply of wine and beer straight into the snowdrift on the doorstep.

Part of the reason we were here was that it was the February half-term week in the UK, when more conventional ski holidays become ruinously expensive. Flight prices between London and Geneva can be ten times those of the previous month; the western-Alps haunts of anglophone skiers (the Méribels, Verbiers and Val d’Isères) are packed to the rafters and priced accordingly. For those of more limited means, it’s a week that requires creative thinking (in 2020, we’d ended up at Mount Parnassus in Greece). This time I’d found cheap Ryanair flights to Memmingen in Germany, then spent many happy hours browsing the Austrian website Almliesl, an agency for mountain huts and rural chalets. Some are accessible only by cable car, many let you ski from the door and most are extremely reasonable. The Josef Kreidl Hütte sleeps five and costs as little as €87 per night.

Here was skiing at its most benign: a wide, snow-covered meadow, a long drag lift, a friendly restaurant at the foot of the slope

And though it feels as remote as a backwoods cabin in Alaska, the hut is actually bang in the centre of the vast Kitzski area, with 233km of ski runs, 57 lifts and 60 mountain restaurants. It sits in the base of the Saukaser valley, which divides the two halves of the ski area — to the north the runs closest to the village of Kirchberg and Kitzbühel itself, to the south those connected to Jochberg and Hollersbach. Walk a few minutes from the cabin and you can just make out the 3S-Bahn, the cable car that links the two sides, travelling almost level for 3.6km across the valley, as much as 400m above the ground (London’s Shard is 310m).

Good skiers could click into their skis at the front door, descend the track we’d driven up (officially classed as a ski-route rather than a piste) then walk 550m to the lifts at Jochberg, but our kids didn’t quite have the momentum for the flat sections, so we drove instead.

Kitzbühel’s reputation might be built on its fearsome competition runs — the Streif and the Ganslernhang — but here at Jochberg was skiing at its most benign: a wide snow-covered meadow, a long drag lift beside it, a friendly restaurant, the Hausleit’n Stub’n, at the foot of the slope. (Nor does it match the reputation for expense: parking was free, so are all the area’s beginner lifts). To one side of the restaurant terrace was the ski school office — the motherly owner would gather kids from the tables as they finished their strudels and hot chocolates.

I spent the first morning failing to teach my five-year-old son Hamish to ski, bending double to hold him upright on his skis as he went floppy in protest. After what was, to be honest, a fairly grim couple of hours, we retreated to the restaurant where, buoyed by lots of chips and glasses of Almdudler, he relented and agreed to join up for an afternoon lesson. Half-term week in the western Alps can mean ski-school classes swollen to maximum size, often sold-out long in advance, but Kitzbühel’s peak seasons are driven by Bavarian rather than British holidays, and that afternoon was so quiet that Hamish had two young female instructors to himself. All for €55. We returned after two hours to find him smiling, eager to show off his new turns, his “aeroplane arms” and his new nickname, the “gnarly nugget”.

Perhaps because we’d appeared so out of our depth on arrival, Franz seemed determined to look after us. One afternoon he took me off to show me around the area, racing ahead on skis, jumping off little kickers, making it hard for me to keep up. With his little white ponytail, he reminded me of a Willie Nelson of the mountains, part grandfather, part ski-bum. On the lifts we chatted, despite limited shared vocabulary. “We must speak very slowly and look each other in the eye,” he said, smiling.

Franz had worked for 42 years at Haderer, a famous Kitzbühel shoemaker (his last job being to make six pairs of boots for Schwarzenegger), but since retiring 16 years earlier, he had skied all winter. In summer he lived up on the mountain tending 150 cows. As we skied, he pointed out the other high pastures and farms: these are rolling slopes of meadows and forests rather than the jagged, glaciated spires you find in other parts of the Alps. Not that they aren’t beautiful or impressive. Eventually we left our skis and made a short climb up to a summit of the 2,156m-high Rossgruber. To the south we could see the Grossglockner, Austria’s highest mountain, to the north, to the dramatic ridge of the Wilder Kaiser. A large metal cross was attached to the peak and as we took pictures of each other holding on to it, Franz seemed slightly emotional. “I already live in heaven,” he said. “When I die, I must stay here.”

We only had five days in this enchanting world, with its dark woods, fairytale cabin and friendly old shoemaker. After two more lessons, Hamish was ready to head up the mountain and explore, and on the final two days we roamed the area, skiing together for the first time as a family — over the 3S-Bahn to Kitzbühel, even all the way to Kirchberg. Best of all, though, was dropping away from the main slopes, down into the Saukaser valley, across the meadows, into the forest and back to our cosy wooden home. 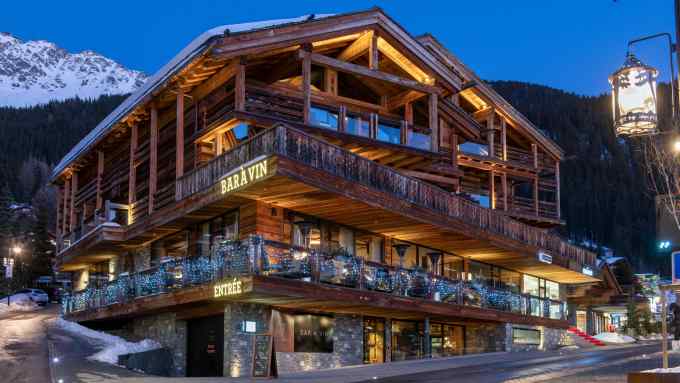