A well-stocked supermarket meat cabinet comes close to clean water as a basic expectation of American life. Running out of chicken breasts, minced beef or pork chops is unimaginable to millions of consumers.

That is in large part thanks to Tyson Foods, the largest meatpacking company in the US. It pioneered a system of vertical integration that put chicken barns and abattoirs under one corporate roof. It supplied meat that was plentiful, reliable and cheap.

Covid-19 has exposed a flaw in that system. Meatpacking plants were designed for workers standing within arm’s length of each other to butcher parts zooming down conveyor belts. Coronavirus has spread easily in such an environment.

Plants are now shutting down, threatening to obstruct the flow of meat. After weeks of growing concern, Tyson Foods chairman John Tyson this week sounded a blaring alarm.

“The food supply chain is breaking,” the 66-year-old billionaire wrote in full-page adverts published in Sunday’s New York Times, Washington Post and Democrat-Gazette in his home state of Arkansas. He warned consumers that “millions of pounds of meat will disappear from the supply chain”.

It was a public relations success, generating headlines about incipient meat shortages. On Monday, the governor and senators of Iowa, where Tyson has idled work at three pork plants, urged the White House to use every authority available to get production moving. The following day President Donald Trump did just that, issuing an executive order to keep plants open that labour groups worried would endanger workers’ health.

Just to see John Tyson put a letter, a full-page ad in the New York Times and other papers is extraordinarily rare, if not unprecedented

Tyson might not be a household name to the average American meat-eater. Some of its retail products carry brands such as Ball Park, Jimmy Dean or Aidells, if they are labelled at all.

In the meat world, however, the Tyson family has a storied lineage.

Mr Tyson’s grandfather, also named John, established the company in 1935, raising chicks and grinding feed in the north-west Arkansas town of Springdale. His father Don Tyson led it from 1967 to 1995, building scale with supply deals with the likes of McDonald’s and Walmart, headquartered 20 miles away in Bentonville. Don earned a chicken fortune and forged friendships with fellow Arkansans Bill and Hillary Clinton.

John Tyson served as chief executive from 2001 to 2006 and has been chairman since 1998. He became CEO after the company narrowly avoided prosecution over gifts to Mike Espy, President Clinton’s first agriculture secretary who was cleared after a years-long bribery investigation. John and Don Tyson each received immunity for their testimony, while Mr Clinton pardoned a Tyson executive convicted in the affair during his final days in office.

John Tyson’s most consequential decision as chief executive was Tyson’s $2.7bn acquisition of IBP in 2001, which brought together the top chicken producer with a red-meat giant to create what Mr Tyson at the time called “the world’s leading protein provider”. A devout Christian, he also built the company’s chaplaincy programme, which puts 100 clergy of different faiths inside the company’s facilities.

He and a handful of other family members still control the $23bn company through a special class of shares and he is worth more than $2bn, Forbes estimates. In 2019, the New York-listed company paid him $10.3m total compensation, including $1.4m for personal use of company aircraft, a securities filing shows.

Gary Mickelson, a Tyson Foods spokesman, said it was not unusual to see Mr Tyson at the Springdale offices every day, at least before coronavirus required working from home. He is active in the north-west Arkansas philanthropic scene, serving on the board of the nearby Crystal Bridges Museum of American Art run by Alice Walton, whose father Sam founded Walmart, but has kept a low national profile.

This made his 1,000-word missive a shock, said Christopher Leonard, author of The Meat Racket, a book about Tyson Foods and the industrial meat system.

“Just to see John Tyson put a letter, a full-page ad in the New York Times and other papers is extraordinarily rare, if not unprecedented,” Mr Leonard said. “And then to so blatantly advertise that the system is falling apart was breathtaking. I mean, the entire rationale for Tyson Foods’ existing is that they can get meat to the grocery counter consistently, affordably and in a way that doesn’t make you sick.”

Tyson Foods’ plants can slaughter 155,000 cattle, 461,000 pigs and 45m chickens a week. Virus outbreaks have forced Tyson to suspend operations at six plants since early April, including its largest pork facility in Waterloo, Iowa. All were acquired from IBP.

Mr Leonard says the closures show how concentrating the meat supply into fewer, larger slaughterhouses employing thousands of workers had led to “the most narrow bottleneck in American agribusiness”.

“Tyson had a very big part in the creation of the modern system,” said a rival senior executive in the chicken industry. 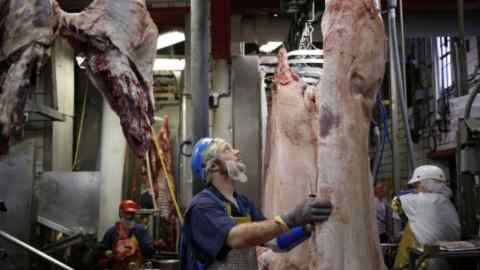 As it struggles to keep plants open, Tyson Foods has offered $1,000 bonuses to 116,000 employees if they come to work to the end of July, potentially costing the company $120m. It has increased worker screenings, added health insurance benefits and begun to station mobile medical clinics at its plants.

In his letter, Mr Tyson urged government leaders to unite to address shortfalls in the food supply.

“We have,” he wrote, “a responsibility to feed our country. It is as essential as healthcare.”