Stockpiles of some of the world’s most important industrial metals have dropped to critically low levels as record power prices in Europe hit production and the war in Ukraine threatens output from Russia.

Inventories of aluminium, copper, nickel and zinc — four of the main contracts traded on the London Metal Exchange — have plunged by as much as 70 per cent over the past year, as traders and big consumers have tapped warehouses for material.

This has come against a backdrop of booming demand as economies have recovered from pandemic lockdown restrictions and supply chain disruptions.

In recent weeks the trend has been most pronounced in zinc, where prices rose 2.8 per cent on Tuesday to a 16-year high of almost $4,400 a tonne. The metal is used as a protective coating for steel in construction, cars and home appliances.

Since the start of the month, available zinc stocks on the LME — metal that has not already been earmarked to leave one of the exchange’s warehouses — have fallen almost 60,000 tonnes to a two-year low of just over 45,000 tonnes.

Analysts say soaring gas and power prices are behind the drawdown. Over the past couple of months, spiralling electricity prices have forced Glencore, Trafigura, Norsk Hydro and others to curtail production at lossmaking zinc and aluminium smelters.

To make up for the production shortfall, some of these companies have been drawing stock from warehouses in and outside the LME system so they can meet contractual obligations with manufacturing clients.

“Current power prices could drive more smelter curtailments, and these decisions may be faster in zinc than for aluminium in the near term,” wrote Marius van Straaten, analyst at Morgan Stanley, in a recent report, referring to the fact that it is easier to adjust the operating rate of a zinc smelter.

The drop in zinc stocks comes at a sensitive time for the LME, which was forced to suspend trading in nickel last month after a vicious short squeeze sent the price up by more than 250 per cent.

Low stocks can contribute to price rises on the LME as traders and producers seek to close short positions by repurchasing contracts, rather than by delivering a registered slab of metal from one of the exchange’s warehouses. 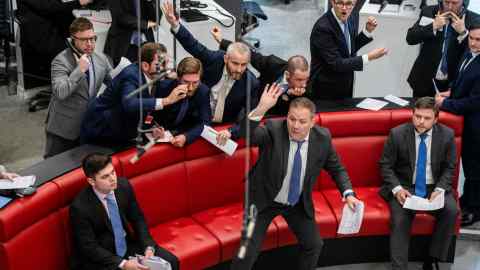 Colin Hamilton, analyst at BMO Capital Markets, said the latest ex-LME warehouse data would do little to ease fears about another explosive increase in prices.

Production cuts are just one factor behind the strain in metals markets. Concerns that supplies of copper and nickel from Russia could be disrupted by western sanctions over Moscow’s invasion of Ukraine have also pushed up prices.

Goldman Sachs reckons copper could be “sleepwalking towards” running out of inventory.

It expects the supply of refined copper to lag demand by 375,000 tonnes this year — double its previous estimate — and large enough to deplete all visible stocks by December.

“We believe investors remain complacent over the risks to Russian copper supply, as they are not as immediate or sharp as those seen in the grains or energy markets, or even aluminium,” Nick Snowdon, analyst at Goldman, wrote in a report.