On an industrial estate in the northern English county of Durham, a vet is poring over paperwork at Prima Cheese, one of the UK’s biggest producers of shredded cheese for pizzas.

Before Brexit, when Prima’s trucks were ready to deliver to its EU customers, all the company had to do was print off an invoice and complete a carriage of goods document, and hand both to the driver. Then off the truck went. On New Year’s Day, all that changed.

After a Brexit divorce deal ended 50 years of frictionless trading, new terms agreed on Christmas Eve were applied to UK exports to the EU from January 1. Shipments from the mainland UK to Northern Ireland also became subject to EU customs rules.

In the weeks that followed “it was easier sending something to Shanghai than to Belfast”, says Prima’s chief executive Nagma Ebanks-Beni.

The bureaucratic quagmire in which her company now finds itself demonstrates the challenges faced by businesses with supply chains spanning the EU and UK — or, indeed, any trading bloc that starts to fragment.

Exports to Northern Ireland were “a minefield”, Ebanks-Beni says. When Prima finally managed to get a truck load of cheese into Northern Ireland — in the third week of January — other British companies rang to ask how they had managed it. The UK government initially suggested Brexit might bring “teething problems” that would eventually be resolved, but Prima is worried about lasting confusion.

It recently had a truck full of cheese held at Calais for three days. Five previous consignments had passed through, albeit with different queries each time. But the same paperwork for the sixth was judged unacceptable by the French customs authorities and vet. Ebanks-Beni is frustrated and angry at the problems. “If things were going to change, why weren’t we better prepared?” she asks. “I feel the government has held business in contempt. We just feel let down.”

If any UK food business could deal with the changes, it should be Prima Cheese. The company, which employs 150 people, won a Queen’s Award for exports last year, recognising its continuous growth over the preceding six years. Of the 500 tonnes of cheese it processes each week in the town of Seaham, 25 per cent is sent to 52 different countries — in the Middle East, Asia, North America, and Caribbean, as well as continental Europe. In fact, in relative terms, the EU is a small market — “luckily for us,” says Ebanks-Beni.

However, for Prima’s ingredient imports, the EU is key. All of its raw product, mostly mozzarella, came from the bloc. It has temporarily cut this to 80 per cent, with the rest coming from Wales.

The UK has not yet imposed import checks for goods from the EU, raising fears of even more bureaucratic problems when that happens. The start date for full UK border controls is now January 1 next year, having been delayed several times. “Why? They aren’t ready,” says Ebanks-Beni. “It beggars belief.”

Before Brexit, a vet was needed on site only for health certificates for exports beyond the EU. Now, this is needed for consignments sent to Northern Ireland and the EU as well. This, and hiring customs brokers — vital problem solvers — has increased costs.

The complexities of EU dispatch have meant long, frustrating days for Prima export manager Michael Knox, who must watch lorries laden with cheese sitting outside, as hours tick by. Government departments have given conflicting advice, he says, and its websites lack specifics. “There’s no clarity as to what needs to be done,” he says.

Even sending cheese samples to potential new EU customers has been difficult. The last set, sent to France on March 8, was diverted to a hub in Cologne where it sat waiting. It eventually arrived back at Prima’s factory in Seaham on April 8 and had to be disposed of.

Making the Brexit changes work is essential, though, because the EU is such a big trading partner for the UK: in 2019, it accounted for 43 per cent of exports and more than half of imports.

In January, when the Brexit transition period ended, these levels initially fell. UK goods exports to the EU fell 41 per cent in the month, while imports dropped 29 per cent. There were no similar falls in Britain’s trade with non-EU countries, suggesting the change was related to Brexit controls rather than the coronavirus pandemic — although the government noted that many companies had shipped and stockpiled goods in advance of January, in case of border issues.

In response to Prima’s criticisms, the UK government says: “We know that some businesses are facing challenges with specific aspects of our new trading relationship. That’s why — in addition to the £20m SME Brexit Support Fund — we are operating export helplines, running webinars with experts and offering businesses support via our network of 300 international trade advisers.”

Prima, which completed a big expansion just before the pandemic, managed to hold its revenues steady in the year to March 31, at £70m, which enabled it to report a £3m gross profit. But Ebanks-Beni is far from content at turnover holding steady in the face of Covid and Brexit. “It’s not a happy story because behind that there’s been so much anguish and stress,” she says. 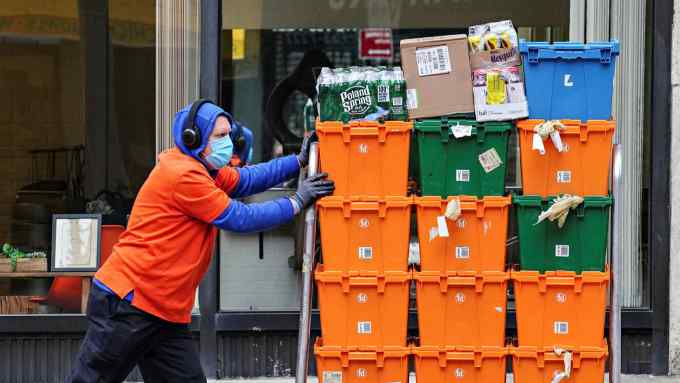