Two years ago, Starling was best known as a digital banking upstart, targeting dissatisfied retail customers of the UK’s big banks with easy-to-use current accounts, overdrafts and money transfers. Yet in the UK’s huge business lending market it barely registered, with a paltry £115,000 of loans on its books.

Then the Covid-19 pandemic hit and, amid the chaos of the sudden shift to remote working and fears of a deep recession, Starling threw open its doors to small and medium-sized enterprises (SMEs). By March this year, Starling had facilitated £2.2bn of business loans to more than 40,000 customers.

“[Starling] has had a good crisis,” says John Cronin, an analyst at stockbrokers Goodbody. “There were questions around its ability to convert deposit products into loan products, so the pandemic was a huge step forwards in that respect.”

The technological groundwork had been laid before Covid-19. In 2019, Starling was awarded a £100m grant by the UK’s Capability and Innovation Fund to build a new system that would allow it to lend to businesses. The money was part of a scheme to improve competition in the UK’s business banking market, which is dominated by incumbents such as NatWest, Barclays and Lloyds.

Starling put another £100m into developing the new technology, and its system was almost ready in early 2020 as the pandemic took hold.

“We had the fundamental building blocks in place, but we didn’t have the product,” says Anne Boden, Starling chief executive.

The big opportunity for Starling came when the UK government launched its coronavirus business support schemes, such as Bounce Back loans, and looked for banks to help distribute them. Starling had some quick thinking to do.

“We had three or four days’ notice to get to know the scheme rules and launch the product,” says Boden. “It was a very difficult decision for us whether to do this or not. We would have to process an incredible amount of volume, we’d have to get our systems ready in time and be ready to face the press, because there was a lot of visibility out there about these loans. But if we didn’t do these loans, people would always say that Starling wasn’t there for me when I needed you.”

Although this was not the cautious, step-by-step entry into business lending that Boden and her team had envisaged, they took the plunge. “I remember being there the day we pressed the button to open the website to allow people to apply. We didn’t know whether it would be a trickle or whether people were desperately wanting those loans,” she says.

It turned out to be a torrent. Starling lent more than £2bn via the government coronavirus business loans schemes, turbocharging its entry into the small business market and giving it an immediate customer base.

“We always expected to do this much lending, to have this many customers . . . but it has happened twice as fast [as we expected]. The move to digital has been accelerated by 10 years by the pandemic,” says Boden, who notes that the bank’s new technology coped well with the influx of new customers and data.

Business loans were not the only thing that Starling tackled in the teeth of the pandemic. Launched in April 2020, Starling’s “connected” card allows volunteers to spend money on behalf of people who are isolating.

Ronit Ghose, an analyst at Citi Global Insights, says that Starling was in a strong position to innovate when the pandemic hit, as were other so-called neobanks. “The advantage of neobanks is that they are digitally native,” he explains. “That makes it easier for them to roll out new products — they were built for the digital world, whereas the existing banks are tourists or travellers [in it].” The neobanks’ use of cloud technology is important, he says, as it avoids the need to spend heavily on infrastructure. 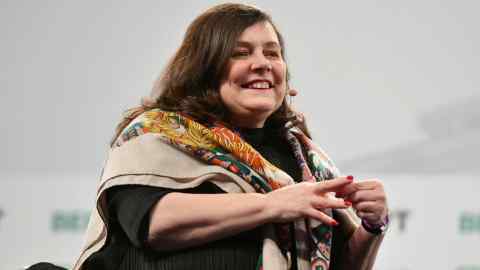 Starling, Ghose adds, had the extra advantage of a chief executive with experience in banking. Boden is a computer scientist by training but, before founding Starling in 2014, she had worked in the industry for 30 years — at institutions such as Allied Irish Banks, Royal Bank of Scotland and ABN Amro. “When I built Starling in 2014, it was because I thought banks were spending lots of technology dollars, but on the wrong things,” she says.

Big banks, argues Boden, spend a lot of money on large, multiyear projects, with implementation coming at the end. “It is more efficient to build small things, implement them and adjust them and update them,” she says. “It’s also less risky. Starling is all about small, incremental changes, and each incremental change makes things a bit better.

“The banking industry has woken up and realised there is a lot to learn from other industries.”

As the UK economy recovers and businesses get back on their feet, Starling will face fresh challenges. One of the big questions it faces is how well the SME loans perform, and whether there will be a wave of defaults from pandemic-hit companies. The Bank of England has said the number of small businesses that are heavily indebted has risen since the start of Covid-19, and it has warned of a likely rise in insolvencies by the end of this year.

Boden says Starling has been “pleasantly surprised that businesses are doing better than we thought”, adding that some of the SMEs it lent to have already repaid their loans.

Even if there are defaults, the government will be on the hook for the losses as it guaranteed the loans, so there is little risk to Starling’s balance sheet.

In any case, the schemes are a useful experience for Starling, says Cronin. “For any new lender, there will be lessons to be learnt — you just don’t have the data that your peers have. But it has found the ideal mechanism to learn lessons at limited cost to the capital base.”

Another challenge for Starling will be to retain the customers that signed up during the pandemic, and to win new ones.

Ghose says there is plenty of potential in the market. Starling is “not the only fintech to have an SME product”, he says, citing rivals such as Revolut and OakNorth. “It is a rich seam for neobanks to mine. SMEs often complain and feel like they are being underserved by their bank. Small business clients are always looking for an alternative.”

It will not be easy, though. As well as the other fintechs targeting SMEs, the big UK lenders also harbour ambitions in the market — and they have plenty of capacity to lend.

However, Starling’s plans stretch beyond lending to SMEs based in the UK. Earlier this year, it made its first acquisition, buying specialist buy-to-let lender Fleet Mortgages for £50m, in a deal that brought with it £1.75bn of mortgages under management. It has also outlined plans to expand into Europe with what it calls banking as a service — allowing companies to use Starling’s technology to create their own savings accounts, current accounts and debit cards.

The company’s potential has attracted support from some big names. In March, Fidelity and the Qatar Investment Authority led a £272m investment round that valued Starling at £1.1bn. The following month, investment bank Goldman Sachs joined in, putting in £50m. Starling has also talked of a flotation, potentially as early as the end of 2022.

“Starling has had a better crisis than many neobanks,” says Ghose. “It is in a good strategic position and it has plenty of options now to grow.”