Jump to comments sectionPrint this page
US financial regulation updates

Sign up to myFT Daily Digest to be the first to know about US financial regulation news.

The US Securities and Exchange Commission has received almost unanimous opposition from companies and investors against plans to allow most hedge funds to obscure their stock holdings.

The change to reporting requirements, proposed this July, would allow money managers with less than $3.5bn of assets to skirt quarterly disclosures of their stock positions, up from the current threshold of $100m.

But strategists at Goldman Sachs said that of the 2,262 letters submitted to the SEC during its consultation period, 99 per cent opposed the new rule, reflecting concerns that the switch could allow activist investors to quietly build up stakes and seek to force companies into new strategies. “No recount necessary,” the bank wrote. “After it reviews all the comments, we expect the SEC will withdraw the proposal.”

Lobby groups such as Business Roundtable and the US Chamber of Commerce, as well as BNY Mellon and Calpers, America’s largest pension fund, were among those that sent or signed letters to the US securities regulator to voice opposition to the plans.

“Under the proposed $3.5bn threshold, companies would be unable to monitor those activist investors who would be exempt from reporting their positions, thus enabling activists to use the increased lack of transparency for their benefit and not that of long-term shareholders,” the Business Roundtable wrote in its letter.

Under rules in place for more than four decades, investors with $100m or more of assets have to report their holdings in so-called 13F filings. But since that 1975 rule came into force, the market capitalisation of the US equity market has grown from $1tn to $35tn. The SEC has said it is now time to raise the threshold in line with the size of the market.

Chairman Jay Clayton said the reporting requirements placed “unnecessary burdens” on smaller fund managers — a claim met with scepticism by small funds as well as industry bodies, some of which say the cost of filing 13Fs is negligible and the process is now largely automated. The CFA Institute, the association of investment management professionals, said the regulator’s concerns on disclosure costs were not shared by charterholders who worked in the asset management industry.

“The president of one investment management firm told us most firms with assets under management of more than $100m have portfolio accounting software programs that easily create reports,” the CFA wrote in a letter opposing the proposal. “It is then a simple step to upload the reports to the SEC website for filing purposes.”

Mr Clayton also told investors on a call with investment bank Piper Sandler earlier this month that the information provided in 13F disclosures was being used in ways not anticipated when the rules were first introduced.

Companies have used the disclosure to “identify who their shareholders are”, he said. “Is 13F the most efficient way to do that? Probably not.”

The SEC did not respond to a request to comment on the letters voicing concern over the proposed switch.

If the plan was approved, only the world’s largest 550 investment managers would have to report their public equity holdings. Most hedge funds and activist investors would be able to keep their portfolios secret, with Allison Herren Lee, the SEC’s lone Democratic commissioner, warning that the proposal would erase the visibility into funds holding a combined $2.3tn. The plans lacked “a sufficient analysis of the costs and benefits”, she said.

She and some other correspondents, including Calpers, also claimed the securities watchdog did not have the authority to change the rules.

In its objection, NYSE warned that smaller companies would be particularly hard hit. It estimated that the storage specialist The Container Store Group, for instance, would lose the ability to tell who owned more than two-thirds of its shares. Marriott Vacations’ chief executive Stephen Weisz added that hedge funds were often large owners of small- and medium-sized publicly traded companies, and that they had proliferated from about 140 in number in 1968 to more than 10,000 in 2020.

“We believe that the long-term impact of the amendment proposed by the commission will be detrimental to public markets in the US,” he said. 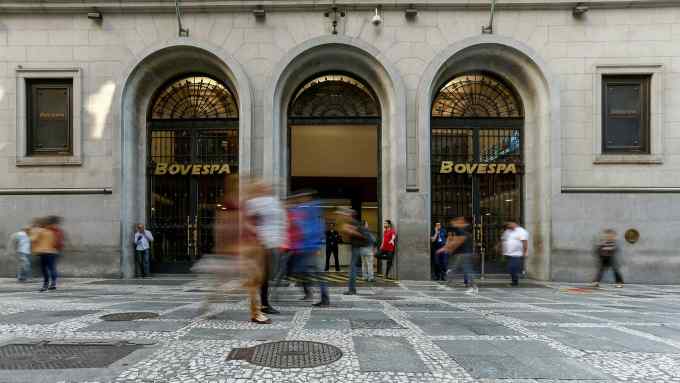