The French institution offers a rainbow of bespoke fabrics and 104 shades of white. No wonder it inspires such devotion

The appointment is set for 28 Place Vendôme, 3pm. Through the stone arches of Charvet’s Parisian flagship headquarters, antique oak tables bearing neat piles of patterned silk scarves and their signature pastel-striped shirts are stationed by the doors; racks of ties are arranged by jewel-toned colour; the air is scented with the maison’s signature smoky fragrance. Jean-Claude and Anne-Marie Colban, co-directors of Charvet, greet me, “thrilled” to take me behind the scenes of their tailoring maison. It feels, as every time I visit Charvet, like slipping back through time.

Behind the façade of the eccentric, six-storey building is crammed the 184-year history of shirtmaking that makes Charvet the original chemisier, the world’s first dedicated tailor of the shirt. Founded in 1838 on rue de Richelieu by Joseph-Christophe Charvet, son to Napoleon Bonaparte’s wardrobe curator and nephew to his linen keeper, Charvet moved to 25 Place Vendôme in 1877. It is the oldest of the institutions that frame the square, dating back to before it became a destination for high-end jewellery. The first location on Place Vendôme (it moved to its current home at No 28 in 1982) was selected by Joseph-Christophe’s son Edouard just as Vendôme’s adjoining Rue de la Paix was becoming the city’s most important shopping district: the Palais Garnier opera house had opened on Place de l’Opéra two years prior.

Joseph-Christophe’s innovation was to replace the services of a linen keeper and a tailor – who would visit the houses of their clients to fit their shirts using basic measurements – with a dedicated space where gentlemen could have their full measurements taken, before selecting from an enormous array of fabrics. Their sole focus on the shirt also allowed them to refine the tailoring techniques used in shirtmaking, fashioning an item that allowed their customers far more freedom of movement than the traditional garment. Clients such as Marcel Proust, Winston Churchill, Edward VIII, Charles Baudelaire and, later, Coco Chanel, flocked to Place Vendôme.

Every time I visit Charvet is like slipping back through time

By 1965, the Charvet heirs were ready to sell the brand; an American buyer put in a healthy offer. French President Charles de Gaulle, however, “was not necessarily [an] Americanophile”, says Jean-Claude, and “the idea of seeing his appointed shirtmaker slipping through his hands didn’t please him at all”. The Ministry of Industry became “concerned” and contacted Charvet’s main fabric supplier, Denis Colban, asking him to find a French buyer. Rather than doing so, Colban decided to purchase the company himself. “He knew it from top to bottom,” Jean-Claude says of his father.

Under Colban, Charvet entered a new era, as he introduced new products and launched ready-to-wear lines of shirts for men and women. He painted the store’s oak furniture black, “to leave all the space for colours”, says Jean-Claude. It was “a stimulation of the brand’s imagination” and new customers such as Yves Saint Laurent and John F Kennedy soon became clients.

This dedication to design has been carried forward by the Colban siblings following the passing of their father in 1994. “There’s a genre, a taste and almost a flavour that is inherent to Charvet,” says Jean-Claude of the principles they inherited. “We don’t only recognise our clothes by their cut or the craftmanship that’s involved in their making. There’s an aesthetic we strive to achieve.” Their stewardship and continued innovation has attracted a new generation of fans in André-Leon Talley, Carine Roitfeld, Sofia Coppola and David Beckham (although the pair prefer to remain discreet about the particular tailoring tastes of their A-list clientele).

Under Anne-Marie and Jean-Claude’s guard, the headquarters today feels like something between a bazaar and a grand salon. The ground floor is home to their signature silk passementerie knot belts and cufflinks, suede and leather slippers with their coordinating pouches, neckties, scarves, cashmere and silk-blend polos. Fabrics are coiled into the shape of cabbages (“our very own choux”, says Jean-Claude) to display the various colours and patterns for their accessories: peach, lime, sunshine yellow, lilac, chocolate brown, cotton candy pink, midnight blue and shimmering silver. Artist and poet Jean Cocteau, a client in the early 1900s, used to say: “Charvet où l’arc-en-ciel prend ses idées” (“Charvet is where the rainbow finds its ideas”).

The third floor is home to Charvet’s pièce de résistance: ready-to-wear shirts (which are priced from €410, while special order shirts, which allow clients to select the fabric, the collar, cuff styles and sleeve length, start at €480). What makes a Charvet shirt special? The yoke, which drapes over the shoulders, “is curved to follow the back,” explains Jean-Claude. The placket, the strip of fabric where the buttons are placed, merges seamlessly into the front of the shirt; each set of stripes, across the body and sleeves, is perfectly aligned, and the thread used on the button holes is matched precisely to the hue of the stripes. “Hence, when you look at a shirt or even touch it, you think it’s made of one piece of fabric,” says Jean-Claude. Precision is key. “The collar is made with six layers of unfused cloth,” he says. In the siblings’ office, a magnifying glass stands over a thread counter among piles and piles of fabric, “woven from specially chosen Gossypium barbadense cotton from the Nile delta”. “The stitching is four millimetres from the edge,” he explains of the shirt’s design. “There are 20 stitches per inch”.

Their attention to detail does not go unnoticed. “I’ve sometimes ordered custom-made [Charvet] shirts that I’ve never worn, just for the pleasure of having them made,” confesses artist Ramdane Touhami, the man behind Officine Universelle Buly’s relaunch. The fourth floor holds offices, the fifth floor hosts men’s custom tailoring and the near 5,000 bolts of wool, cotton and linen available to choose from. The sixth floor is home to the silk atelier: “8,000 variations of over 300 patterns are created here every year, and are used for our neckwear, scarves and pyjamas.” They are their only fully ready-to-wear items, explains Jean-Claude.

The Colbans are constantly drawing on their archives of colours, some dating back to the early 1900s, in order to reinvent and create new ones. “If you only knew the amount of time and effort that we put into finding the right tint for each of those threads,” Anne-Marie says, running a hand over the fabric of a shirt.

It was this time and effort that seduced Vogue editor-at-large Hamish Bowles. “I crave a lot of colour in my wardrobe and the exquisite nuances of shades in the Charvet offering make my heart beat faster. Those ties! Those pocket squares with the wonderful deco silk foulard prints!” he says. “There is such an embarrassment of choice that you know it’s most unlikely that you will bump into anyone wearing exactly the same silk-knit tie. And if you do… perhaps that’s a soulmate?”

HTSI
How I fell for the boxer, again 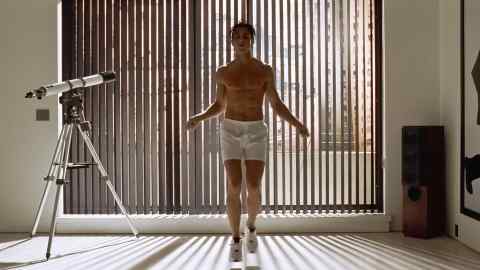 For those looking for the perfect white shirt, customers can choose from the Mur des Blancs: 104 shades of white, and 400 textures and weaves of fabric. (Made-to-order shirts, based on existing patterns that are modified and personalised, are priced from €560; bespoke shirts, for which a pattern is created for each client, start at €695.) “Each season we choose nuances that we retint, while being inspired by things done over 100 years ago. That’s how we refresh the brand,” says Anne-Marie. “Each time, it’s as if everything blossoms again,” she smiles.

The Colbans are committed to the traditions of their maison. They remain outside the trend cycle, have avoided creating a communications or marketing department, and refused several offers to sell to conglomerate groups. But Charvet is far from a mothballed institution stuck in the past. “It’s true that we are faithful to our heritage,” says Jean-Claude as I leave the store, but “we make it a point to revisit those things from the past with the eyes of the present. It’s a perilous exercise: finding this space between fidelity to our customers, to what we stand for, while always reinventing ourselves”.

This article has been amended to reflect the fact that Charvet’s first location on Place Vendôme was No 25. It moved to No 28 in 1982