Frank Gehry: ‘The more humane a building, the better’

Now 93, the Pritzker Prize-winning architect has just completed his first residential buildings in Battersea. They’re a love letter to London

We’ll send you a myFT Daily Digest email rounding up the latest Architecture news every morning.

Few living architects are as lauded as Frank Gehry, the Canadian-American Pritzker Architecture Prize winner whose work resonates so profoundly that he once played himself in an episode of The Simpsons. He is the master of the curvilinear and fragmented form – a sculptor working in the medium of bricks, mortar and magic, conjuring daring feats of architecture instilled with such dynamism they appear poised to uproot and dance though the world’s cities: from his swaying Walt Disney Concert Hall, which opened in Los Angeles in 2003, to the billowing sail-like sweeps of his 2014 Fondation Louis Vuitton in Paris and his leggy Dancing House, completed in Prague in 1996. He is emphatic about the role of his profession. “Architecture is an art form,” he says from his Los Angeles studio. He is perched on a stool in his office, the wall behind him filled with framed photographs of friends and collaborators.

Warm and witty, Gehry is full of fascinating insights. He talks of his sadness at world politics, which is made all the more poignant by his own experiences of the second world war (“I did hear Hitler’s speeches when I was a kid, that’s embedded, and it seems like we are going down that rat hole again”). He reveals how his hope in the younger generation led him to co-found Turnaround Arts: California in 2014, giving schoolchildren access to arts education. He revels in their honesty: “They’ll tell you right from the beginning what they think. I have two granddaughters – they call me Nano and they tell it straight.” And, at the age of 93, he remains enthusiastic about his work. “I’m up for anything that helps build a city into a better environment,” he adds.

Gehry will mark two milestones this year. One is the 25th anniversary of the Guggenheim Bilbao – a shimmering titan on the banks of the river Nervión that stands as testament to the transformation of an urban wasteland into a cultural destination, and which gave rise to the term “the Bilbao effect”. The other is Gehry’s first residential buildings in the UK, which are nearing completion at Battersea Power Station. They, too, are part of an audacious £9bn regeneration project, turning a 42-acre brownfield site into a new city neighbourhood and shopping mecca beside the Thames.

For Gehry, his two towers are a love letter to London. “We put our heart and soul into it because this is a city that I love,” he says. “I didn’t want to screw it up.” He admits with some regret that he’s been unable to see the buildings in the flesh due to the disruption caused by the pandemic. Viewed in situ, however, they are unmistakably Gehry. The rippled edifices accommodate 308 homes, priced from £995,000, some with double-aspect windows overlooking plant-filled terraces, others with spiral staircases, and £5.5mn penthouses including ones with almost 360-degree panoramic views over the city, all ready for occupation by April.

Gehry is not the only architect on the block. His towers are flanked by a snaking silver apartment building designed by the British architect Norman Foster – Foster’s sinuous design creates a high street on either side of the building, populated by upmarket stores and restaurants. Gehry likens it “to the city streets created by John Nash’s early curved buildings”.

My granddaughters call me nano. They tell it straight

Both his and Foster’s developments stand behind Battersea’s historic red-brick power station, a landmark that was built in two parts between 1929 and 1955 and which is cavernous enough inside to accommodate both Trafalgar Square and St Paul’s Cathedral. Here, a shopping mall, which will open to customers this September, is taking shape amid the preserved art deco tiles and industrial columns as part of the Battersea Power Station Development Company’s master plan. A further 254 homes are spread around the building, many already occupied. The opening of the new Battersea Power Station Tube station on the Northern line now serves the bustling community at the site, which will be swelled by the residents of Gehry and Foster’s buildings (phase three of the development) and more as other phases, potentially including additional Gehry buildings, are completed over the next 10 years.

Gehry’s vision was to create a “flower building” – a centrepiece that connected to the power station. “My buildings are thought about from the inside out, not the outside in. There’s a protocol: one bedroom, two bedrooms, terraces, and that creates the texture, but the façade is what gives it a humanity,” says Gehry. “This is not just a bland box with holes punched in.” The architect insists it is the “humanity” of his buildings that sets them apart from others. “That is what resonates with so many people, and what is nice is that the more humane a building is, the more successful it is.”

As he speaks he swivels around on his stool and points to a picture of The Charioteer of Delphi. The Greek statue, discovered at the Sanctuary of Apollo, sparked an epiphany for Gehry more than 50 years ago. “I walked into the museum at Delphi and there it was, this beautiful thing that brought me to tears. I thought to myself, ‘Wow, somebody thousands of years ago made this and it actually made me cry.’ That is what I want to do with my buildings – that is how I want people to feel.”

Gehry’s infectious spirit feeds into the mood of his studio, which he surveys wearing a casual T-shirt and slacks, his frameless glasses pulled on top of his head. The simple white space is furnished with no-frills wooden furniture. Architectural models and colour-saturated paintings are stacked in every spare corner. I notice a giant terracotta fish atop one cabinet in Gehry’s office. Fish are a subject of fascination and he has drawn on them often for inspiration: you can see it in the scale-like titanium tiles cladding the Guggenheim Bilbao and in his 52m golden Peix (Fish), which was built for the 1992 Olympics on the beachfront of Barcelona. “Fish are millions of years old and they look architectural, but the key was translating that movement into a building,” he explains of his preoccupation. “I think Bilbao [constructed between 1993 and 1997] was the first time I got to do a curve shape that’s from the fish fascination,” he says, then laughs. “There’s something fishy about that building.”

Gehry’s new London buildings twist in a similar way, but their all-white exterior means they’re surprisingly pared-back compared to some of his other buildings. Gehry says that was deliberate, so as not to compete with the power station. Instead, his towers were envisaged as part of a quartet of corresponding buildings, each in dialogue with the other. It’s an approach that recalls his rippling 76-storey skyscraper in New York, completed in 2011: that was inspired by the curves and folds of fabric depicted by the sculpture of the 17th-century artist Gian Lorenzo Bernini, while also echoing details from the adjacent Woolworth Building. “I have a picture that shows the Brooklyn Bridge, our building and the Woolworth Building; they feel like an ensemble even though they are quite different,” says Gehry. “Instead of everyone having their own big ego building, this is talking to our neighbours. This is being neighbourly.”

There’s a bravery in what Gehry does that he readily admits. “Well, we tend to like Michelangelo,” he laughs. “Michelangelo, Bernini, they didn’t have to be brave, they just had to be artists. Their society cultivated and respected that. But, of course, you do have to be a little bit brave to be an artist right now.” And he doesn’t see any distinction between art and architecture. “All the great painters of the Renaissance were also architects, from Giotto to El Greco.”

Not all have agreed with Gehry on this point, particularly when he was starting out as a graduate of the University of Southern California, following his family’s immigration to the US from Canada in 1947. “The architectural people in my age group were very critical of what I was trying to do. But the artist community in LA embraced me from the beginning, so that is the culture I grew up in. I didn’t look at other architects but, of course, after the war, all the teachers had been to Japan, and I was really into that. I even played in a Japanese orchestra.”

Gehry’s well-documented love of music is his earliest and perhaps most profound influence, colouring many memories of his childhood in Canada. “In high school, I was interested in science, mathematics, but also in music. My family name was originally Goldberg and we lived in Toronto, which is where Glenn Gould did the Bach Goldberg Variations. I loved listening to them – I still do. It was a big, important part of my life,” he says. He would happily design more concert halls.

Gehry’s mother was instrumental in his passions, both in music and art. “[My parents] were kind of poor, but she would take me to concerts at Massey Hall. The conductor was Ernest MacMillan, and he used to ride his bicycle through the park where I walked to school, so we often talked. She also took me to the museum – the one I ended up remodelling [the Art Gallery of Ontario, completed in 2008] – and I became interested in art that way.” 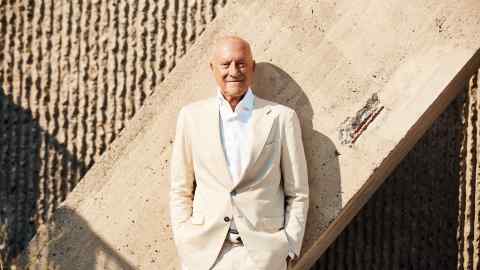 It’s also largely thanks to Gehry’s mother that he identifies as an anglophile and royalist: it’s one of the reasons his first residential buildings in London are so close to his heart. “My mother had this pretension, because one of her relatives was once invited to the Queen Mother’s tea party, and she thought that meant they were part of the royals,” he says. “She used to carry the same little white purse, and there’s a lot of nice stories about her fantasies of being the Queen Mother as she got older. So it’s in my culture and in my life: British royalty, singing the national anthem. I kind of feel part of it because I grew up with it. It’s part of my heritage.” He once met Diana, Princess of Wales, but is still waiting for his invitation to tea at Buckingham Palace.

Get alerts on Architecture when a new story is published 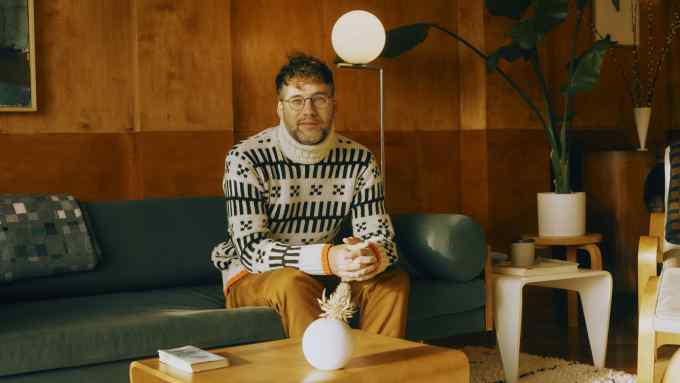