When London restaurateurs Jeremy King and Chris Corbin – founders of The Wolseley, The Delaunay, Brasserie Zédel, Colbert, Fischer’s, Bellanger and Soutine – lost control of the company that bears their name earlier this year, it prompted calls for a boycott. Regulars feared these cherished establishments would – and could – never be the same without Corbin and King at the helm. Such was the level of affection and esteem for a pair who made their names at Le Caprice and The Ivy before launching The Wolseley in 2003 and changing the London dining scene forever. If every restaurant is an expression of its owners, theirs were elegant and egalitarian places run from the floor not the boardroom, where everyone was made to feel special whoever they were. And though the food was never entirely the point, you knew whatever you ordered, from the Wiener schnitzel to the chopped chicken salad (two Wolseley staples), you wouldn’t be disappointed.

The dust may have settled on Corbin and King’s departure, but questions remain. Principally, “Where are we going to go now?” says former British Vogue editor Alexandra Shulman. “And is it OK to go [back]?”

Some have returned out of loyalty to the staff. “The week after [Corbin and King] lost control,” says milliner Stephen Jones, “I went into The Delaunay [and] was so happy to see the staff and reassure them that a whole section of London appreciates what they have done over the years.” Others have simply moved up the street. Food writer Tom Parker Bowles, who went to The Wolseley at least once a week, is among those making the exodus to 45 Jermyn St and Maison François in St James’s.

Esquire editor Alex Bilmes compares the efficiency of a work lunch at 45 Jermyn St with the gleaming professionalism he came to expect at The Wolseley. “The food never got in the way of why you were there,” he says. “You didn’t have to learn everything about where the fish came from. You could be in and out in 45 minutes.” And to be spoilt now: “I always say yes to Scott’s,” he says “And Gymkhana.”

I just have people come to my house. We have a nice terrace, we sit outside

Since writer John Lanchester is no longer booking what he calls RFKACAK (“Restaurants Formerly Known As Corbin And King”), he’s been enjoying new arrivals like JKS’s Arcade Food Hall in London’s Centre Point building. “It couldn’t be further from Jeremy and Chris’s aesthetic,” he says, “but it’s an amazing idea – a food court, taken seriously, from some of the best kitchens in town.”

Quo Vadis gets the thumbs-up from Ravinder Bhogal among others, not only for chef Jeremy Lee’s exuberant cooking but also as a convivial place, says Bilmes, where you bump into “clever, interesting people” from fashion, media and entertainment.

For special occasions, everyone agrees on Claridge’s (“for glam”, says jewellery designer Solange Azagury-Partridge), Spring (“for delicious food”, says Shulman) or The River Café (for “that clubby feel”, says Parker Bowles). But compared to The Wolseley, those prices are steep. “I remember a movie director telling me one of the industry appeals of The Ivy was you didn’t have to be rich to go there,” says Lanchester. “Actors between jobs could still afford it. It’s a Corbin and King hallmark.” Likewise, Parker Bowles used to take his kids on jaunts to The Wolseley. “But I’m not taking them regularly to The River Café,” he says. “I’d be bankrupt.” For that, he prefers Sam’s Riverside in Hammersmith. And for lunches with his mother, the Duchess of Cornwall (another Wolseley devotee), it’s now Wiltons, Cafe Murano or Locanda Locatelli. Edward Enninful, another River Café habitué, revealed to the FT that his more affordable everyday go-to is Pizza East Portobello.

Perhaps in line with changing work habits, many are staying local. Azagury-Partridge raves about Hereford Road in Notting Hill, a converted Victorian butcher’s shop. Lanchester favours The Canton Arms in Stockwell and Clapham haunts Trinity and Minnow. Plenty are also flocking to a new wave of scene-y destinations such as Café Cecilia in Hackney and Sessions Arts Club in Clerkenwell. But unlike The Wolseley, where tables were traditionally kept back for walk-ins and regulars were squeezed in without a reservation, tables at those places are often booked up for weeks. “I don’t mind booking a week in advance,” says Shulman, “but I don’t want to be committed two months ahead.”

It’s enough to convince you to stay home, which is what The River Café’s Ruth Rogers is doing. “I just have people come to my house. We have a nice terrace, we sit outside.” Inevitably, most are already pining for a Corbin and King comeback. Virginia Bates ran into Corbin recently at Peter Blake’s 90th birthday party: “I said to him, ‘Do something. Make it happen. Have I got to learn to cook again?’”

Susie Boyt
A love letter to The Wolseley 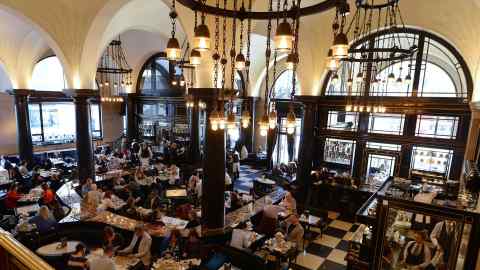