The best mascaras for luscious lashes

Innovations that will cause a flutter

Beyoncé likes mink ones. Marilyn Monroe’s sold for $8,960, and Madonna’s got some that are studded with diamonds. False eyelashes have long been a shortcut to superstar impact. But these days, clinically backed growth serums, lash lifts and innovations in technology offer impactful ways to make your homegrown flutter more fantastic.

The biggest news is a launch from Augustinus Bader, the stem-cell scientist who brought his scar-healing expertise to skincare, garnering cultish devotion – and a $100mn beauty brand. Following the success of his hair range, Bader has launched an Eyebrow & Lash Enhancing Serum (£115). Its results are impressive. In 12 weeks, lash thickness increased by 40 per cent and lash length by 34 per cent, claims the brand (it also works on brows).

The serum’s main potency comes from TFC8, Bader’s proprietary blend of vitamins, amino acids and lipid structures. “You can think of TCF8 like a superfood that triggers self-healing,” Bader explains. “It has active ingredients that reawaken our cells to act at their full potential, optimising lash growth and follicular function.” Because Bader’s serum encourages cells to do what they already do – but better – there should be no irritation.

Sue Marsh, known as the “queen of lashes”, whose clients have included Naomi Campbell, is glad that serums are taking over. “I seldom encourage extensions these days; people used to get addicted and wear heavy lashes for months on end. That can lead to traction alopecia [drop out].” Instead, these days she recommends a serum “with perhaps a lash lift”. Lifts effectively perm the lash and are effective for four to six weeks; try a standard lift (in which the lash opens in a J shape) or a curl (a C shape), both of which are available at London’s Blink Brow Bars, alongside a hydrating “lash mask”. The gold standard is an LVL (length, volume and lift) with a moisturising treatment, adds the team behind beauty app Lucie, which enables users to book at-home treatments. Lash specialist Daxita Vaghela also recommends asking for a keratin-based formula in lifts to strengthen the lash.

The theme of nourishing and protecting continues with mascaras such as Victoria Beckham’s Future Lash (with conditioning vitamin E and B3, £26), Trish McEvoy High Volume (£22.50), and Hourglass Unlocked (with shea butter, £29). Each is designed to be smudge-free but then to wash off easily in warm water (meaning you won’t pull lashes out). Lancôme’s new Le 8 Hypnôse Mascara sees the brand favourite infused with a strengthening and moisturising amino-acid and shea-butter serum (£32). The brush is also made from plant fibres to soften application. For pure va-va-voom, clean beauty fans like The Mascara from Jones Road (£24) and the lengthening, curling and separating powers of the new Chanel Noir Allure (£37) which has an undertone of red.

Make-up artist Pat McGrath recommends playing with application. As well as pulling a mascara wand up and outwards to “flare” the ends of the lashes, she suggests you might “apply an additional layer of mascara to the middle of the lashes for a more open, doe-eyed effect”.

HTSI
Ask Adeela: how can I get superhero skin? 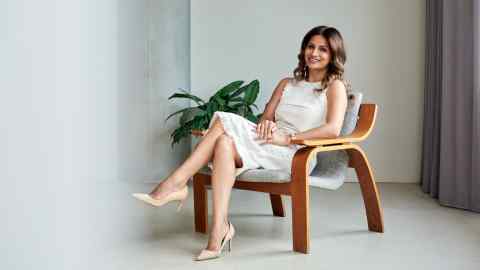 For former J Crew creative director Jenna Lyons, however, a genetic condition that affects her lash growth meant falsies were the only way. Dissatisfied with what was on offer, she created the false lash brand LoveSeen – lashes so lightweight and easy they can be worn by anyone (including men), with lighter options for the day and night. “Growing up, I really only thought of lashes as something for getting dressed up,” she tells me. “Now I have these lashes that I can wear any time of the day.” LoveSeen’s lashes (from $18.50) aren’t yet available in the UK, but Cult Beauty is seeing a trend towards Sweed’s natural-looking glue-on lashes (£20), or check out the Vieve half lashes (£11) created by the make-up artist Jamie Genevieve.

This richness of routes to a fulsome lash effect means that now you just need to choose which way you like to bat.