A few weeks ago, I asked Patek Philippe owner Thierry Stern if he had any more launches planned for this year. He smiled mischievously and said he had one final “bomb”.

When we next met, he lit the metaphorical fuse, telling me he had made 170 examples of the celebrated 5711 steel Nautilus with a Tiffany blue dial to mark as many years of collaboration between his family’s firm and the American jeweller, which LVMH acquired for $15.8bn last year.

Patek Philippe and Tiffany have a special relationship, begun in 1851 when Antoine Norbert de Patek made his first trip to America and met Charles Lewis Tiffany, who then began to sell Patek Philippe watches in his store. Today, Tiffany is the only other brand name that Patek Philippe permits on its watch dials, and Patek Philippe is the only external watchmaker stocked by Tiffany.

The Gérald Genta-designed Nautilus has its own special history. Launched in 1976, it was one of the first luxury sports watches, advertised under the strapline: “One of the world’s costliest watches is made of steel.” (Traditionally grand watchmakers had worked in gold, so the choice of steel was heterodoxical.)

In July, a green-dial Nautilus found its way to auction and sold for €416,000

By the beginning of this century, the Nautilus was regarded by many as a relic of times past. Smartly, Patek Philippe refreshed the watch for its 30th birthday in 2006. The result was the 5711, and interest snowballed with the release of two new Nautilus models on its 40th anniversary in 2016. Today about one-fifth of the 60,000 timepieces Patek produces annually are Nautiluses of one sort of another.

The announcement early this year that the 5711 was being phased out was met with panic among collectors. A valedictory series with a green dial was announced, and the mania mounted: in July a green-dial Nautilus found its way to auction and sold for €416,000, almost 14 times its original retail price.

“The Nautilus has exceeded the status of an icon, it is an absolute must-have for anyone who wants to start a collection of Patek Philippe today,” says Remy Julia, head of watches at Christie’s Middle East, India, Africa and Russia. “The reality is that there is so much money in new markets and among younger collectors and they do not want to be left behind, so they are pushing prices to the new levels we have seen in the last 12 months.”

Stern unveiled the sketches for a Tiffany blue Nautilus on a call to LVMH earlier this year. “It was a nice surprise, a little gift to say: ‘Congratulations for your investment. You spent a lot of money buying Tiffany. We wish you all the best.’”

They would be more than thrilled to buy such a company, but I’m not willing to sell and they know it

That is very much the spirit in which it has been received. “Gérald Genta was a genius of watch design and the Nautilus is one of his biggest successes, if not his biggest,” says Alexandre Arnault, executive vice-president of product and communications at Tiffany and son of LVMH founder Bernard Arnault. “Associating ourselves with it this way is very meaningful, and something that we’re very proud to show the world.”

But before Patek Kremlinologists start reviving rumours of a closer relationship between the two companies, Stern is emphatic that Patek Philippe is not up for sale. “They would be more than thrilled to buy such a company, but I’m not willing to sell and they know it.”

“But this is a good way to work together,” he continues. “They are a family business, too. Mr Arnault is working with his children and I like them, they’re nice kids. You do not have a lot of companies like that where the pressure is on the shoulders of the kids.” 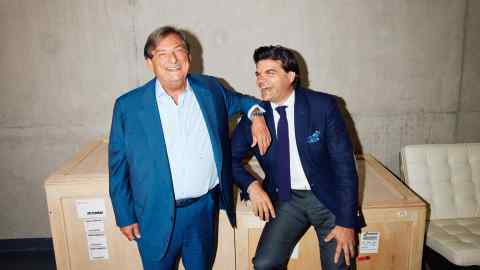 Allocation of the 170 watches, priced somewhat modestly at $52,635 each, will be intense.

“We want to make sure that we sell the watches to real end clients and not speculators,” says Arnault, “because the watch will unfortunately drive a lot of speculation.”

(One Nautilus will be available to the public, via a December 11 auction at Phillips to benefit environmental charity The Nature Conservancy.)

“The difficulty is to select the 170 people who will have the watch, and I really am scared about that because they will be such a demand for this piece,” says Stern. “But it’s Tiffany who will have to deal with that.”