The return of an Arctic survivor

Seventy years ago, there were still bits of the planet that needed discovering. It was not until 1953, on the day of the Queen’s coronation, that news broke of the successful ascent of Everest. Only in 1960 did human beings descend to the bottom of Challenger Deep. And although Poles North and South had been reached in the early 20th century, the inhospitable wildernesses of the polar regions, their ice sheets and seismic events, still held many mysteries. Mysteries that, on 8 July 1952, the British North Greenland Expedition left Deptford to unlock… with a little help from a watch made by Rolex’s sibling brand Tudor.

The expedition was equipped with 26 of the new Tudor Oyster Prince, the brand’s first watch to be both automatic and waterproof. Now, seven decades on Tudor has taken the opportunity of this anniversary to launch the latest evolution of its expedition-spec tool watches, a new 39mm Tudor Ranger.

The watches had to withstand temperatures of 90 degrees below zero; suffer 100 mile-an-hour blizzards; live underground in tunnels of snow

I have long been a Tudor enthusiast and since its relaunch a little over a decade ago I have enjoyed seeing it flourish as a heritage-inspired tool watch brand with thoughtful, detailed design, superb build quality and ludicrously accessible pricing. But even at £2,420 corners on the new Ranger are conspicuously uncut. At this price it might not be unreasonable even for a Swiss manufacturer to use a bracelet made elsewhere, but Tudor revels in being able to offer Swiss-made. And if you prefer, there is a leather and rubber band or a jacquard shuttle loom-woven fabric strap option at £2,170. The 70-hour power reserve movement is made in-house by the brand’s majority-owned subsidiary Kenissi and, although COSC-certified, exceeds chronometer standards. COSC tests only the movement and permits a variation of between -4 and +6 seconds per day, whereas Tudor, testing the finished watch, works within parameters of -2 and +4 seconds.

The 2022 watch references the design of Rangers of the 1960s – if the overall look of the Ranger is familiar, that is because it recalls Rolex’s Explorer I. In a further parallel, just as there was the famous orange-hand “Steve McQueen” Explorer II, so there was a Tudor Ranger II during the early ’70s that had an orange sweep-centre second hand.

But to view Tudor as the poor man’s Rolex is to sell it short; it always had its own identity as a more down-to-earth rugged-use timepiece. While Rolex was advertising its watches as the choice of divers, jet pilots, explorers and business leaders, Tudor was rather more, how should one say, “real world”? “Punished without mercy!” bragged an advert showing a Tudor worn by a flat-capped pneumatic drill operator; “Jarred beyond belief” was the slogan of an advertisement that depicted two men riveting the steel frame of a skyscraper. However, my favourite shows the ancestor of the new Ranger next to a photograph of a man in a checked shirt holding a massive Stihl chainsaw. Opposite is the strapline “Pierre Grosjean, lumberjack, chose his watch as carefully as he chose his chainsaw”.

Before they went lumberjacking these watches had been put through their paces by members of the British North Greenland Expedition who took their responsibilities very seriously. In a covering letter to Tudor on his return, an expedition member wrote “please find enclosed watch and associated data with conclusions as drawn by a layman and thus not necessarily useful to you”. 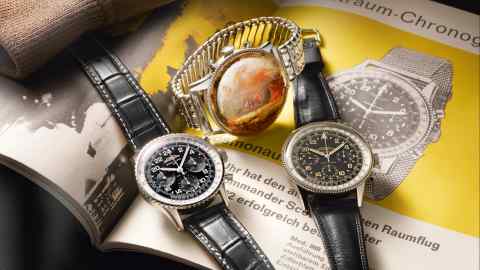 I can’t help thinking that this was penned with a hint of irony as the accompanying tabular information, graphs and abstruse mathematical formulae are way, way above the head of this layman. The data dump is even more impressive given that, as the brand announced, the watches had “to withstand temperatures of 90 degrees below zero; climb 9,000ft in the rarefied atmosphere; suffer 100 mile-an-hour blizzards; live underground in tunnels of snow”.

Impressive though that is, should you be taking your summer holiday somewhere a little warmer, happily the new Tudor Ranger will look just as good on a sunbed as in an ice tunnel.