The FT journalist asserts that anthropology can help us understand ourselves, our tribes, companies and communities

As a teenager, one of my most memorable education experiences was reading about a tribe in North America called the Nacirema. They resorted to odd oral rituals and their women baked their heads in ovens.

Most students were appalled by such barbarity, only for our teacher to reveal that the tribal name spells American backwards. We were reading about ourselves — through the eyes of an anthropologist. It was an unforgettable learning experience, leaving me with an abiding respect for outside perspectives.

I did not become an anthropologist, but Gillian Tett did. The skills she acquired studying the marriage rituals of Tajikistan gave her a way of seeing — lateral vision, asking questions, assuming nothing — that notably yielded rewards when she predicted the financial crisis of 2007-08. In her new book, Tett, an FT journalist, makes a compelling case that “anthro-vision” can help us understand ourselves, our tribes, companies and communities, and to reduce our wilful blindness.

Tett describes how anthropology has fuelled her journalism. Open-ended curiosity, interpreting markets through their symbols and rituals, illuminated early the dangerous isolation of the financial sector and, later, the growth of ESG investing. Another Tett observation — that the tech sector was starting to look like pre-crash finance in its arrogance, wealth and isolation from reality — was just as important.

Engineers are a tribe much like bankers: isolated by power, money and a language no one else understands. They impose their values on products, which forces us to behave in highly constrained ways, undermining our autonomy.

Quoting the anthropologist Jan English-Lueck, Tett concludes that engineers have merged “useful”, “efficient” and “good” into a single moral concept — but that morality is not comprehensively shared. The techlash has been fuelled by assumptions technologists made — about voters, consumers, students and teachers — without any engagement with those communities. Why not, Tett asks, work with these groups, and understand their values and concerns, rather than against them?

We’ve been sold the myth that with enough hard data, we can know everything. But numbers can only show what is, they don’t reveal why. Soft data is what anthropology reveals: the meaning behind behaviours. In Japan, a KitKat isn’t a relaxing snack (“Have a break”), it’s a good-luck charm. In Malaysia and Singapore, a car isn’t just a machine for travelling safely; it’s also a haven of social safety that people treat quite a lot like home.

Without such understanding, we force-fit meaning on to others, make costly mistakes and miss opportunities

Anthropological insights don’t come from surveys but from fieldwork: directly observing and talking to people. Without such understanding, we force-fit meaning on to others, make costly mistakes and miss opportunities for knowledge, innovation and legitimacy.

So-called scientific management — using metrics to assess everything from productivity to employee mood — hasn’t prevented numerous business failures. Focus on returns raised no concerns about some reckless banks pre-2007, but the practice of awarding cash or cabbages to high or low performers would have caught an anthropologist’s eye.

After each such fiasco, culture is deemed the culprit, HR deputed to design surveys and the ensuing change programmes, which mostly fail. But companies are communities and anthropologists, whose study is the social systems of meaning, could bring more pragmatic insight. Meetings don’t carry the same expectations to different people, just as the culture on one floor of a building won’t necessarily be the same as on another. Decades of leadership and teamwork consulting have focused on retraining individuals, whereas unpacking webs of collective meaning could untangle knotted collaboration. The recommendation not to hire for cultural fit is just one of several good and possibility-rich suggestions.

With case studies and examples ranging from Google’s errors to pandemic beards, Tett explains anthropological revelations invisible to computers. I found myself thinking of other, unsolved, cases that might be cracked by thinking like an anthropologist: the toxic Home Office, the flailing Church of England or our failure to design really good education systems. Where data scientists and ideologists assert, anthropologists could reveal. 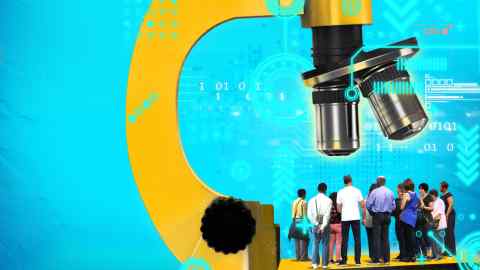 Inventing words in the hope of creating a brand has become a tiresome fad in business publishing, but “anthro-vision” is a useful way to illuminate much that can’t be seen any other way — and so are philosophy, literature and history.

In an age obsessed with hard science, it’s becoming painfully obvious that the so-called “soft” subjects — social sciences and the humanities — have the power to reveal what otherwise remains obscure. One of the glories of Anthro-Vision is that it never argues (as many do) that its way of seeing is the only way. It’s a timely call for decision-makers to wean themselves off their dependency on big data and embrace the full complexity of human life.

Margaret Heffernan is the author of ‘Wilful Blindness: Why We Ignore the Obvious at our Peril’