US and China close to deal resolving impasse over audit inspections

Washington and Beijing are close to an agreement that would allow US regulators access to audits of Chinese companies that are listed on American exchanges, a potential breakthrough in talks that have languished for more than a decade.

Bankers in Hong Kong were informed of a possible deal this week, according to people familiar with the matter. American depository receipts linked to shares in Chinese companies including Baidu, JD.com and Pinduoduo started trading higher on Tuesday, suggesting a resolution was in the works.

The US has demanded that Chinese companies and auditors make their financial audits available for inspection every three years by the Public Company Accounting and Oversight Board, an auditor watchdog, or face a ban from Wall Street listings.

But Beijing does not allow foreign regulators to inspect Chinese company audits, citing a desire to protect state secrets. This month, five state-owned Chinese companies said they would voluntarily delist from US exchanges before they were ousted in 2024 as a result of the pending ban.

Additional information about the potential deal and the timing of an announcement was not available, but the PCAOB has said any agreement would include full US access to Chinese auditors.

The news was first reported by The Wall Street Journal and caught some accounting professionals off guard. But there had been signs this year that the countries were working towards a solution.

In May, a senior official at the Securities and Exchange Commission said in a speech that Chinese companies could seek to safeguard state secrets by exiting US markets. This was followed by this month’s voluntarily delisting announcement by companies including PetroChina and China Life Insurance Company.

Taken together, these actions suggest the US has offered a way for the Chinese officials to co-operate by taking certain companies with state secrets out of the PCAOB’s purview, said Paul Leder, a former head of the international affairs office at the SEC, which oversees the PCAOB.

“The fact that five companies connected to the Chinese government have taken that step [to delist] signals that progress is being made on a deal that would provide the PCAOB access to audit work papers located in China and Hong Kong,” said Leder, now a counsel with Miller & Chevalier. “[This] certainly suggests that a deal with the PCAOB is in the works.”

Any agreement would be a first step to gaining access to Chinese audit papers, PCAOB chair Erica Williams has said.

Inside BusinessTabby Kinder
Crunch looms in China-US wrangle over delistings 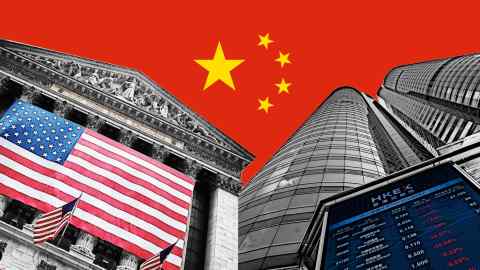 “Our team must be able to go to China and test whether what’s written on paper works in practice,” Williams said in a July speech.

An agreement would hinge on co-operation between US and Chinese officials, said Lynn Turner, a former SEC chief accountant.

“Until we see the terms of the deal, it would be difficult to assess whether it will turn out to be a success or not,” he said.