Cult Shop: a film nirvana in the home of Cinecittà Studios

Francis Ford Coppola, Susan Sarandon and Martin Scorsese have all been drawn to this tiny film store

“When people talk about a film, they’re really talking about themselves,” says Giorgia Grossi of Rome’s Hollywood Tutto Sul Cinema, the cineaste’s wonderland she co-owns with her stepfather, Marco Castrichella. “For me, the dialogue with customers is the best part about being here.”

And what customers those are. Paolo Sorrentino buys vintage posters here, Bernardo Bertolucci was a loyal client, and the signatures of David Lynch, Ben Stiller, Francis Ford Coppola, Susan Sarandon, Abel Ferrara, Colin Firth and Martin Scorsese are all testimony to the visits paid by cinema royalty to this quintessentially Roman space, a stroll from the Tiber in the city’s historic centre.

The store initially began life as a market stall on Piazza Navona in the early 1980s, where Grossi’s mother, Barbara Frangi, sold film projectors. She hung vintage movie posters to make her products more appealing, but soon realised that passers-by were often more interested in the posters than the projectors. She later met Castrichella, who made a comment about her Taxi Driver brooch, and the rest was history. The couple married, and Hollywood Tutto Sul Cinema was born in 1983 as a VHS rental and poster store on Via di Monserrato, in partnership with the country’s first authorised serigraph printing press, Servizi Ausiliari Cinema.

The first cache of stock comprised just 80 arthouse titles – movies by Bergman, Eisenstein, Truffaut and Godard – and the shop soon found a following among the cinephiles of Rome, home of Cinecittà Studios and the beginnings of Italian cinema.

Today, Hollywood offers a rich trove of screen treasures, from arthouse DVD box sets of Béla Tarr, Xavier Dolan and Jim Jarmusch films, to Downton Abbey and Gomorrah. Original and reprinted vintage posters, including Laurel and Hardy, Hitchcock’s The Birds and The Wizard of Oz, sit next to those of shining new releases (all €10), set photographs and glossy cinematic books, such as Aldo Tassone’s Fellini 23½. All can be shipped internationally. Among its gems are an original poster of Divorce, Italian Style (€200), the cult 1961 comedy starring Marcello Mastroianni. “If we took it to auction in New York, it would probably go under the hammer for $1,500, but that’s not what we do here. We want to follow the pace of normal life,” says Grossi.

This is a space where the cinematic happens

It’s this mix of rare collector-level finds, popular classics and a warm generosity of spirit that attracts both movie fans and industry stars to the unassuming space. Grossi is full of stories: “When I asked Matt Dillon to sign a photo of Coppola’s Rumble Fish, he said, ‘No way, I was way too young and beautiful. Don’t you have one of The House that Jack Built? That’d be more realistic.’” She laughs.

This sense of community and connection is key. In pre-pandemic times, Grossi was the artistic director of a local film festival, held in the streets of the San Lorenzo district. During lockdown, the shop has held Facebook Live events with screen luminaries including Gomorrah director Matteo Garrone and The Young Pope actor Silvio Orlando. 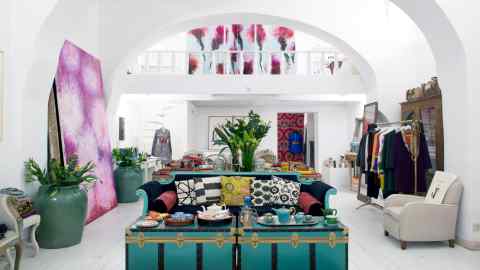 The vintage store’s longevity in the face of technological advancement is all thanks to its warmth and specialist interests. It has continued to thrive despite the appearance of newsstand DVDs, digital piracy and the advent of streaming services. “Our vintage style is what makes us unique,” Grossi says. “We have no plans to change that. You can stream all you want but you’ll always need to talk about what you’ve watched with someone. YouTube has no human value.”

And the store has that in spades. Some customers pop by without buying anything at all, just for a chat “à la Coffee and Cigarettes”. This is a space where the cinematic happens. “Fifteen years ago a couple of teenagers met here,” says Grossi. “They left the shop talking about a movie and went for an aperitivo. Today they’re married and have children. They still come here.”