Spivvy, polished, interwar tailoring, as popularised by the television series, is all over the London men’s collections. And you can blame David Beckham for that

We’ll send you a myFT Daily Digest email rounding up the latest Menswear news every morning.

There is a draw to classic menswear: three-piece, double-breasted, roped shoulder. Those kind of pedantic fixations have been heinously out of fashion of late, as menswear has swung towards tracksuits rather than tailored suits.

They certainly haven’t been evident at London Fashion Week Men’s in recent seasons, focused as it is on emergent talents whose distinction has largely come from eschewing traditional men’s wardrobe components.

But it appears already that the Autumn/Winter 2019 menswear season has marked a return to the spivvy, polished, interwar styles popularised by the television series Peaky Blinders. Half a dozen of the shows have been rooted in that period — granted, Charles Jeffrey’s Loverboys were dressed in Flapper dresses, but there was a tartan flat-capped look that could easily be imagined on deadly Tommy Shelby.

As could almost everything proposed by the label Kent & Curwen, established as a Savile Row suiter and recently revived under designer Daniel Kearns — alongside David Beckham, who part-owns the label and understandably features heavily in the promotion. The brand has created a capsule collection in collaboration with the BBC crime drama. Which sounds like an odd mix (and honestly, I don’t understand the exact ramifications — were they working with the stars? The costume designers? Uncertain), but in reality makes perfect sense. And not just because it will garner attention (I just wrote a whole lot about it).

The collection will arrive in store just as the fifth series launches in September, in a neat promotional tie-in. It also fits because Kent & Curwen was founded in 1926, and this collection — collab, and otherwise — stuck close to that period’s style, which still has appeal and relevance to men’s wardrobes. The models looked like well-bred English public schoolboys (via a period drama), ducking under the low lintels of doorways in the neo-Gothic 1890-something show venue on London’s Temple Place in their Brideshead re-Revisited garb.

The look has been revived repeatedly — the college-striped blazers, the rugby sweaters, the melton-wool duffle-coats, and the swinging officer’s great-coats are tropes of menswear resurrected, seemingly, every few seasons. But these were, if by rote, at least adroitly done, and given Kent & Curwen’s antecedents, they had authenticity. Kearns also proposed his own take on what is already conspicuous as next season’s key item: the Big Checked Coat (capitalisation intentional). It was, in a word, blinding.

One of those coats was seen at Astrid Andersen — which bears mention because Andersen has been one of the major proponents of the aforementioned sportswear. Oddly, this time around, she traced the genealogy of the tracksuit right back to the 1920s, proposing an elevated bunch of sportswear silhouettes; tracksuits came vintage-look in cable-knit, alongside slithery pyjamas and baseball shirts and kimonos and big, baggy cardigans. It was fuzzy — texturally and thematically — as Andersen committed to neither tailoring nor track-suiting and instead offered something wavering in-between. Her point of view is usually love-or-loathe, and all the stronger for it. This felt a little lightweight.

Hussein Chalayan could never be thus described. He is an undeniable, incorrigible intellectual, a “philosopher”, a “thinker”, and many other words in quotation marks which generally means in fashion that the clothes hang heavy with earnest concepts. His menswear, however, displays a consistent deftness — and deserves far more attention and acclaim than it gets. This time, Chalayan even seemed to be having fun, titling his collection “Pre-tension” — a pejorative oft hurled at his work, which here he had embraced. “Pretence in all mediums can healthily lift us away from our reality,” read a somewhat tongue-in-cheek manifesto on each seat. “Adding richness to the monotony of our lives.”

These weren’t pretentious clothes in the slightest. Granted, the fluoro yellow and orange lipstick Chalayan slathered on his male models came across as a bit affected. But the clothes themselves, inspired by riding, fetishism and army manoeuvres — apparently rubber galoshes are applicable bottoming to all three activities — were marvellous. Peep-show windows were cut between different layers, and harnesses and lappets of fabric folded around the body. Trousers were odd and soupy, draped, unwearable; but the outerwear stands out as some of the finest we’re likely to see, particularly short, wide-cut jackets with kimono sleeves, in camel, navy and — of course — a checkered wool. 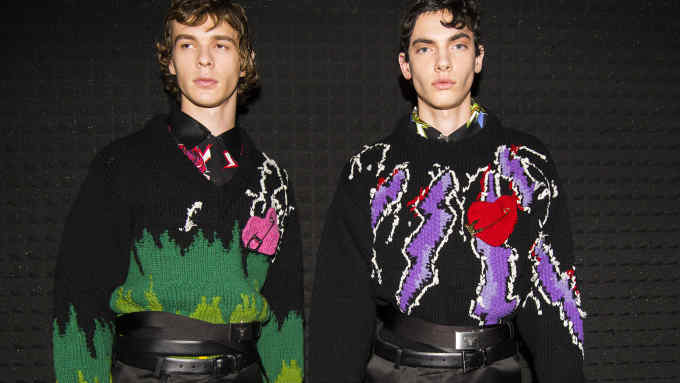